Selection Sunday has come and gone and the Phoenix Suns still find themselves a bubble team. But what if the playoffs did start today... and what if the NBA altered their ineffective playoff seeding format?

The Suns made a statement to the selection committee with their early morning romp against the Toronto Raptors, but still have their work cut out for them with just 16 games to go.

Memphis is still one game up on the Suns and also own the head-to-head tiebreaker. Since starting just 15-19 while dealing with injuries the Grizzlies are 24-8 over their last 32 games.

Dallas is 1.5 games ahead of Phoenix and has won 14 of their last 20. The Mavericks start an eight game home stand tomorrow and their remaining schedule is far from daunting.

Golden St. and Portland are almost out of striking distance.

The battle for the playoffs may very well come down to the very last games that include Dallas vs Phoenix on 4/12, Phoenix vs Memphis on 4/14 and Dallas @ Memphis on 4/16, the last night of the regular season.

There's a real chance it's going to take 50 wins to get in.

Unless you're in the Eastern Conference. At 27-40 the New York Knicks still have an outside chance. If the Atlanta Hawks continue at their current pace they will finish around 37-45.  That means NY might make it interesting if they can close out 10-5.

Obviously the current system in the NBA sucks. But if we know anything about broken systems in professional sports it's that they tend to be perpetuated for interminably and excruciatingly long periods of time (see college football) before even some movement is made in the right direction.

Seeing as how I'm caught up in NCAA Basketball mayhem I decided I'd take a stab at seeding the NBA teams in a 16 team bracket and see how it compared to the match ups we would be "looking forward to" under the current rules. 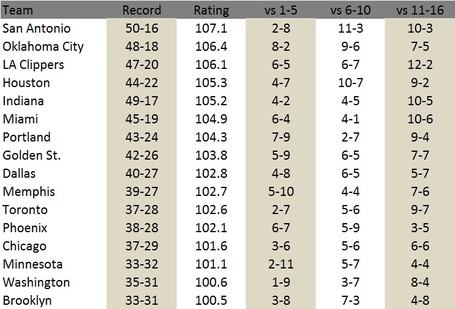 This table is part of what I used in my seeding process. I factored in things like win/loss vs best opponents, injuries, how teams have played in the second half of the season compared to the first, etc...
To be quite candid, I didn't pore through all of this in excruciating detail. Like the real committee I was able to throw something together by the seat of my pants. Of course, I'm sure you'll be interested where I've got our beloved Suns slated.
#3 Seed (10 overall), South Bracket, Phoenix Suns 38-28

Here's the rest of the bracket starting with #1 overall seed Oklahoma City in the Midwest bracket.

The current NBA playoff structure based off of the Conference and Divisional seeding is a joke. Travel and regional considerations have much less importance than they once did.

Why the hell does it make sense that each Conference should be represented in the Championship game of a sport?

Here's where college basketball and football are doing better than the pros. The NFC was a much stronger conference in the NFL last season. The Western Conference is much stronger than the East in the NBA. Not only should teams not be left out of the playoffs based on this (Arizona Cardinals), but it actually creates an even bigger competitive disadvantage from the standpoint that a team in the weaker conference has an easier road to the championship game. Less of a chance to get worn down and beaten up.

The Miami Heat have one series (Indiana) to get to the Finals.

OKC could have Memphis, Houston and San Antonio.

This adds to the bottom end talent, too. By culling Atlanta and Charlotte it adds Minnesota and Phoenix. The darling Suns and Kevin Love are just slightly more watchable than those two godawful teams. I can guarantee you that there's no way in hell I'll watch a playoff game that involves Atlanta or Charlotte, perhaps even if players on their rosters are in the stands cheering on real playoff teams.

The seeding premise is just based on the NCAA bracket theme. The real idea is this.

Seed the teams by record 1-16 and let them at it irrespective of divisions and conferences. I might even tweak it different ways, but this would be a pretty damn simple and easy to implement improvement.