What: Phoenix Suns vs. Brooklyn Nets

Youth and inexperience take on age and poise at the Barclays Center in Brooklyn tonight. The Phoenix Suns hope to avenge a buzzer beater loss to the Brooklyn Nets waaaaaaay back on November 15. Back then, a playoff run was but a twinkle in the eye of Suns fans and the Nets were supposed to challenge the Miami Heat and Indiana Pacers for Eastern Conference supremacy. Both teams ended up in vastly different places than they envisioned in the early weeks of the 2013-14 season.

The Phoenix Suns are fighting for their playoff lives despite exceeding every expectation set forth for them this season. The Brooklyn Nets are all but guaranteed a spot in the Eastern playoffs, yet have been disappointing for much of the year. For both teams, every game left on their statement is a statement about their intentions for the post-season.

The Nets were supposed to be the Chosen Ones, handpicked to lay waste to the Eastern Conference. They were supposed to be a Supergroup with championship pedigree to bring instant legitimacy to a new owner in a new house in a town routinely called the basketball capital of the world. It hasn't panned out that way, due to chemistry issues and injuries, yet they appear to be finding their rhythm at this late juncture of the season. After a disastrous 10-21 start, Brooklyn has gone 23-10 since January 1st and have shown no signs of slowing down.

Two of the Nets' regular starters may not be present for today's game: Brook Lopez is out with a foot injury and Kevin Garnett is questionable with a back injury. So that only leaves Deron Williams, Joe Johnson and Paul Pierce to contend with in the future Hall-of-Famer department. No big deal, right? Brooklyn has done just fine without Garnett, winning 6 of their last 8 since he aggravated his back. Rounding out the starting line-up are Shaun Livingston and Mason Plumlee. That's right, tip-off will be a battle of the Plumdogs.

Aside from a stacked starting line-up, Brooklyn offers the kind of challenge that Phoenix has struggled to rise to this season: a slow methodical pace. Brooklyn is the 5th slowest team in the NBA. While Phoenix was able to impose their will against Toronto, expect the Nets to be less willing to be lured into a track meet. They also play tough defense, holding opponents to 95.5 points since their New Year's turnaround. In their last 7 games, none of their opponents have reached the century mark. There is one glaring chink their defensive armor. Brooklyn allows the 7th highest 3-point percentage to opponents in the NBA, which plays right into Phoenix's plans. Look for Phoenix to shoot early and often from behind the arc.

It's all about momentum for Phoenix. Riding a 2-game winning streak, Phoenix has a chance to sweep this road trip and take another step toward the playoffs. Despite it being the second night of a back-to-back, the Suns should have gotten a few extra hours of rest thanks to the early tip-off yesterday. Every little bit helps as the season grinds on.

Though Eric Bledsoe didn't shoot the lights out in Toronto, he made his presence felt at the charity stripe. It's that kind of aggression that opens the floor for the rest of the Suns and prevents teams from zeroing in on Goran Dragić. I expect to see more of the same tonight. Another standout performance from Gerald Green would go a long way toward a Suns victory as well.

Phoenix's bench will need to come to play as well. In Garnett's absence, the Brooklyn bench has stepped up in a big way, especially Marcus Thornton, who has flourished since being acquired from Sacramento. Andrei Kirilenko is also back after missing a few games due to an ankle injury. If Markieff and Marcus Morris can continue their strong play, Phoenix ought to be able to win the battle of the benches.

Note: For the Nets, I've used the statistical leaders who are expected to be available for tonight's game. 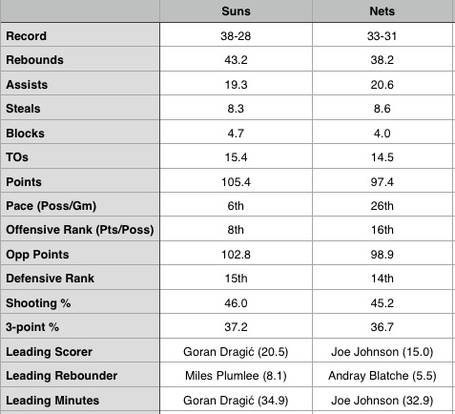 Who's Hungrier? I would love to boil this game down to P.J. Tucker vs. Joe Johnson or Plumlee vs. Plumlee, but plain and simple, this game (and maybe all of the Suns' games for the rest of the season) need to be about desire. Phoenix wasn't supposed to do a damn thing this season and now they are on the cusp of doing the unthinkable. As good as the Nets have been playing, I think Phoenix can take them if the intensity that was on display for stretches in Toronto makes a sustained appearance tonight.

I think the Suns are getting used to the idea of embracing their "stupidity" and just winning. Joe Johnson got us with a buzzer beater last time? Phoenix turns the tables and wins a close one, 102-100.