If the Phoenix Suns want to sneak, fight or claw their way into the NBA playoffs, wins at home against losing teams are must-win games. Tonight's game against Orlando is one such game.

Losers of 8 of their last 13 games, the sputtering Suns need to right the ship in a two-game home stand against losing teams, starting with the Orlando Magic tonight.

The Magic are a rebuilding team just like the Suns but are taking a slower road back to the top, tallying the second-fewest wins in the league this season at 19-49 overall. Loaded with good young pieces, the Magic need to find a star or two to lead them back to the promised land.

So it should be an easy win for the Suns tonight, right? Think again. Cleveland came in with similar numbers a week ago and finished off the Suns without a problem. The Magic have some good young talent and still get a lot of credit for their rebuilding efforts, but just like the Suns are still looking for that star or two to lead them back to the promised land.

While the Suns may have found one in Eric Bledsoe, the Magic may have found one in Victor Oladipo. Oladipo has struggled some as a rookie, but he's still a very good young player. His 13.8 points, 4.3 rebounds and 4.1 assists per game suggest he's a combo guard possibly better suited off the ball more, but the Suns know all about that kind of player. Tobias Harris and Nikola Vucevic are also good young second year players.

The good news is that as bad as it has seemed the last few weeks on defense, the Suns aren't the worst in the league.

Since the Suns returned from the All-Star break, their defense ranks 20th in the league in terms of points per possession (107.1 per 100 possessions). Not good, but not as bad as we might have thought. The Suns are also actually 13th in the league in total rebounding since the break. In fact, ten teams have put up worse points per possession defense than league-worst Utah did in the first half.

The bad news is 8 of those 9 worse defenses than the Suns' are deep lottery teams. Only Atlanta has played worse defense since the All-Star Break and has remained in playoff position.

What has happened to the D? Opponents are attacking the Suns' weak spot: interior D. Opponents are running more pick-and-rolls, drives, cuts, whatever it takes to get to the rim. The Suns have allowed the 6th most attempts in the restricted area since the Break and the second-highest field goal % (67.3%). Couple that with the 4th most attempts in the paint (but outside the restricted area) and the 5th highest conversion rate there (41%) and you can see how the Suns have allowed an astounding number of teams to exceed 50% shooting lately.

This break down on defense is multi-level. Not only are Plumlee, Frye and Morris playing worse defense at the rim, the Suns' perimeter defenders are allowing a lot more back-door cuts and dribble drives into the restricted area than before the break. The Suns were always suspect here, but it's gotten worse.

You're not going to make the playoffs unless you shore up the defense a bit. The Suns offense is fairly even from before/after the break. It's the defense that has dropped off just enough to turn the tables in the win column, losing 8 of their last 13 games. 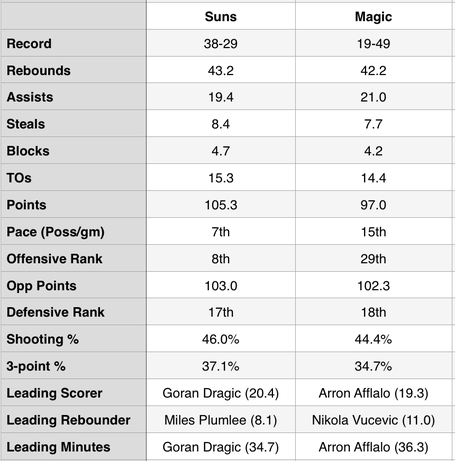 It will be fun to see the Suns' Eric Bledsoe against the Magic's Victor Oladipo. The Magic had considered acquiring Bledsoe last summer to play next to Oladipo in Orlando before the Suns snatched lil Bron up for the desert. Oladipo has tallied a strong stat line this season, just a little short of Bledsoe's with good numbers in points, rebounds, assists and steals.

The Suns don't necessarily need to win this matchup statistically, considering some of Oladipo's numbers are a product of a bad Orlando offense while Bledsoe shares scoring with several other players on a good Phoenix offense. But the matchup will be fun to watch regardless.

With Orlando having just played last night in Golden State while the Suns had a day of rest, I have to give the Suns the advantage.

We can't count on the Suns outhustling opponents anymore this season, but the Suns superior offense should allow them to at least out-shoot the Magic to victory.