Both the Phoenix Suns and Atlanta Hawks came into the season with brand new rosters around an incumbent star (Al Horford for Atlanta, Goran Dragic for the Suns), and both teams exceeded expectations this season. But while the Suns are just about to get healthy, the Hawks are falling apart.

The Phoenix Suns face an injury-riddled and reeling Atlanta Hawks team on Sunday night, needing to win to keep their playoff chances strong before a brutal end-of-season schedule takes over.

The Hawks had reached a high-water mark of 25-21 on February 1, staying strong even after Al Horford went down to a season-long injury. In the Eastern Conference, that was good enough for home court advantage in the first round.

But then injuries hit again. Their second (Gustavo Ayon) and third string center (Pero Antic) both went down with injury, and now leading scorer and rebounder Paul Millsap (knee) is out as well.

A once-promising season in Atlanta is now teetering on the edge of disaster. The Hawks have lost 10 of their last 11 games.

Check out Peachtree Hoops for more on the Hawks

Boy did the Suns need that win on Friday night. After a very disappointing week marred by Dragic's injury, they needed every bit of the Dragon's 40 points to upend the hot-shooting New Orleans Pelicans.

Now the Suns are boosted by a couple more pieces of good news. On Saturday, the Suns signed a veteran energy guy for rebounding down the stretch. Our own contributor, Bryan Gibberman, was there to catch all the quotes. While Shavlik Randolph hasn't even played in the NBA this season, some already see him as a better option than Miles Plumlee. Let's not go that far. Yet.

Also on Saturday, Eric Bledsoe played a 5-on-5 scrimmage for the first time since injuring his knee against the Clippers on December 30. GM McDonough gave ringing praise for Bledsoe's work.

"He said the knee felt really good and has recovered well every time he has pushed himself harder," Suns general manager Ryan McDonough said. "Today, we did primarily 5-on-5 and it will be interesting to see how he responds tomorrow. You still see the explosiveness, see the burst and the ability to get by his guy and finish at the rim. We are optimisitic he will help us down the stretch."

Dionte Christmas last week said Bledsoe looks just as good as he always has. Coach Jeff Hornacek said Bledsoe has had zero soreness or swelling since ramping up his workouts prior to Saturday's 5-on-5 test. The only issue now is when Bledsoe can run up and down the court full speed more than a few times before getting too winded to play full out.

Barring any setbacks, expect a promotion to the active roster any time now. Maybe Tuesday against the Los Angeles Clippers, or Thursday against the Oklahoma City Thunder. Both games are on NBATV, in case you go for that kind of thing. 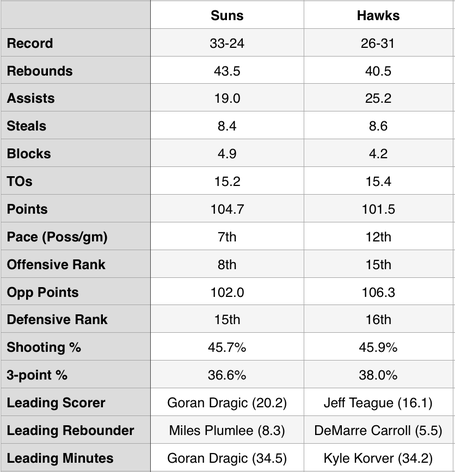 Since Paul Millsap has already been ruled out of this game against the Suns and Al Horford is out for the season, I only listed the active Hawks players among the leaders in scoring, rebounding and minutes.

The Hawks are 28th in total rebounds for the whole season, a problem only heightened by missing Millsap tonight.

The Hawks are a real mish-mash now, with a patchwork front line of DeMarre Carroll and Elton Brand. Carroll has been the small foward all season and played fairly well, but is now forced to play PF with Millsap out. The Hawks just signed second round pick and former college phenom Mike Muscala, so we might see him get some time on that front line tonight.

The Suns really need to win the battle of the boards tonight, and control the Hawks' three-point shooting which remains strong thanks to Kyle Korver getting 34 minutes a night.

I have a hard time seeing the Suns lose this one, unless Dragic takes the night off. The Hawks are reeling. The Suns just need to keep that foot on their throats.