The Phoenix Suns sit a game-and-a-half out of a playoff spot with 14 games to go. In their next six games, starting tonight against the Detroit Pistons, the Suns will face 4 teams with losing records. These are must-win games if you want to make the playoffs.

Share All sharing options for: Game Preview: Phoenix Suns (39-29) host Detroit Pistons (25-42) in yet another "really need to win this" game

The Pistons come into US Airways Center to face the Phoenix Suns as losers of 12 of 15 games since returning from the All-Star break, giving up 108.5 points per game in the process.

But the Pistons could prove a tough matchup for a playoff-hopeful Phoenix Suns team that can't defend the rim. Andre Drummond, Greg Monroe and the rest of the Pistons get the ball inside on most possessions where the Suns are indefensible.

The Phoenix Suns really need this win to stay in the playoff hunt, a game-and-a-half behind two teams that are winning at a much faster rate than the Suns lately. The Suns have won only 6 of their last 14 games as the playoff pressure mounts.

The Detroit Pistons are an interesting lot, and potentially a tough matchup for the Phoenix Suns. The Suns struggle by giving up too many points in the paint. Lo and behold, the Pistons are good at just that. In fact, the Pistons take the second most shots in the restricted area (ie. at the rim) and the fifth most just outside that, but still in the paint.

This will be a killer for the Suns, who allowed 44 points in the paint IN THE FIRST HALF on Monday night to a Brooklyn team who started 4 guards in their lineup. Those 44 first-half paint points were more than 75% of the NBA's teams average on a nightly basis over 48 minutes. Ugh.

Expect a lot of yelling at your TV over how many times the Pistons make a shot at the rim. They are #1 in the league in 2-point shots and #1 in offensive rebounding.

You'd think they are a winning team with that combination right? Wrong, actually. The Pistons have lost 13 of 16 games and are 25-42 on the season despite playing in the Eastern conference.

When they are not taking shots at the rim, the Pistons offense is terrible. They'd rather shoot long-twos than threes (29th in makes and %), their defensive rebounding is poor (25th), they can't make free throws (30th in FT%) and they commit a lot of fouls (21st). Their top two scorers are really bad decision-makers - Josh Smith and Brandon Jennings.

On the other side, the Pistons defense is terrible. They are giving up 108.5 points per game since the All Star break, topping even the Suns' ineptitude in that area.

Goran Dragic feels confident about this game, citing that it took two buzzer beater long-twos from Josh Smith to win the earlier game this year. The Pistons are 5-21 against the West this season.

To contrast the Pistons' strength, the Suns are good at defending the three-point line but terrible at preventing shots at the rim. On the season, the Suns have allowed the league's 4th most attempts in the paint and restricted areas, numbers that have gotten only worse since the All-Star break. 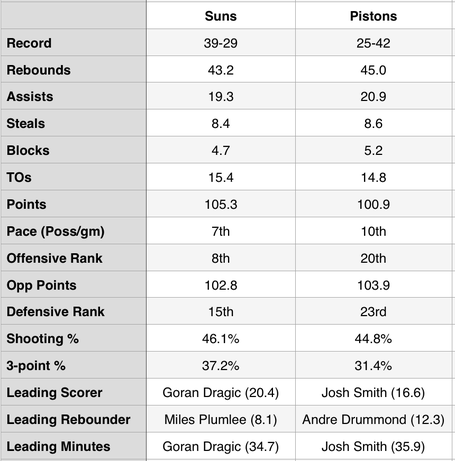 Andre Drummond, their leading rebounder, is day-to-day with a neck strain.

The key matchup, I guess, is P.J. Tucker trying to make sure Josh Smith doesn't have an awesome game and carry the Pistons to victory again.

Otherwise, you could say it's Eric Bledsoe and Goran Dragic keeping Brandon Jennings from tallying a double-double by halftime, something he did in the first matchup this year.

Or, you could say it's Miles Plumlee, Markieff Morris and Channing Frye keeping Andre Drummond, Greg Monroe and Josh Smith from scoring 100 points at the rim.

It will be a frustrating game for Suns fans, watching the Pistons feast in the paint. But in the end, the Suns will make enough shots to outscore the Pistons easily.

I'll call this one a 13-point win. Could be even bigger than that. The Pistons are just really bad lately.