The Phoenix Suns have won 10 more games than the Atlanta Hawks in the NBA season thus far. And yet, Atlanta holds a 3 game cushion for the 8th seed in the Eastern Conference while the Suns are fighting tooth and nail for their first post-season action in 3 seasons. Such is the talent gap between the East and West. Tonight is a chance for Phoenix to emphasize that gap.

Phoenix beat Atlanta in a track meet earlier this month, 129-120. Despite both teams being on the second night of a back-to-back, given the Hawks' propensity for giving up points (17th in defensive rating), it would be fair to expect more of the same. Atlanta has been streakier than Channing Frye, losing 6 in a row then winning 5 in a row before dropping their last 2 straight. It's probably no coincidence that the last 2 losses have come without ace 3-point shooter Kyle Korver in the line-up. He is listed as day-to-day with back spasms and could miss tonight's game. That would be a boon for Phoenix.

The Suns' frontcourt will have its hands full with Paul Millsap and DeMarre Carroll, both of whom have played well in the absence of Al Horford this season. Millsap is both Atlanta's leading scorer and rebounder since Horford went down. The way Phoenix has been hemorrhaging points in the paint, I would expect the Hawks to go to him early and often. It will be the Suns' first time playing against Millsap as he missed the first game with Phoenix due to a knee injury.

Phoenix has won their last 3 games despite inconsistent play at both ends of the court. This has moved them to within a half-game of both the Dallas Mavericks and Memphis Grizzlies (who hold a tie-break over the Suns). This is a should-win game for a team sorely in need of them.

Eric Bledsoe's strong return should continue with a match-up against the Hawks' Jeff Teague. In the last game against the Suns, Teague looked All-NBA, with 29 points, 9 assists and 6 rebounds. Bledsoe's on-ball defense should prevent a repeat of that performance. Additionally, the Suns should be able to generate some serious offense against an Atlanta team that ranks in the bottom half of the league in both opponent FG% and 3PT%.

Note: For the Hawks, I've used the statistical leaders who are expected to be available for tonight's game. 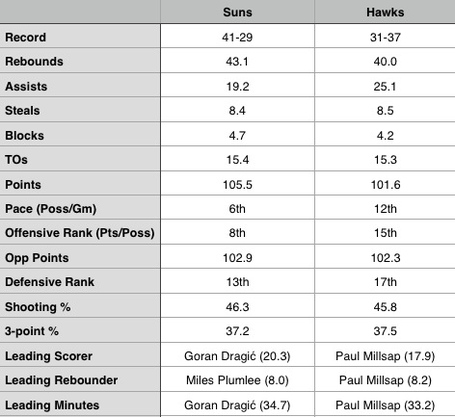 The Hawks' Undersized Backcourt vs. The Suns' Undersized Backcourt - It's not often Phoenix plays a team that runs out a pair of 6'3" or shorter guards in their starting five, but that's just what Atlanta has in Jeff Teague and Shelvin Mack. With Bledsoe matching up with Teague, Goran Dragić should run wild on Mack. Unless Kyle Korver plays, in which case, the backcourt match-ups will become something of a chess game between Jeff Hornacek and Hawks head coach Mike Budenholzer.

And as mentioned above, Channing Frye and Markieff Morris will be tasked with checking Paul Millsap. Frye is the better rim defender (allowing 51.9% at the rim vs. 56.0% for Morris), but Morris is more mobile. If the Suns can find their defensive intensity and limit the rest of the Hawks, then maybe Millsap gets his and the Suns win anyway.

No bones about it, this should be a Phoenix win going away, especially if Korver doesn't play. But since nothing has been a given with this team, I think it will be another close and high-scoring affair. 113-107, Suns