So much rancor for a fanbase of a team that's won 4 in a row and 6 of 7.  So much discord among a bunch of fans whose team is peaking at the right time of the year.

Can't we all just get along?

It seems like for the last week, it's impossible for any post on this site to go more than 10 comments before it somehow devolves into a shouting match between Channing Frye and Markieff Morris supporters.  I have good news for both sides: you're both right.

Undeniably, Markieff Morris has been playing at a higher level than Channing Frye since at least January 1.  The numbers, quoted ad nauseum by the Morris camp, bear this out.  Also undeniably, Phoenix plays much better with Channing Frye on the floor (see below).

What's getting totally lost in this conversation is that the Phoenix Suns are a better team this season for having both players at their disposal.  In fact, the Suns are at their best when 'Kieff and Channing join forces. 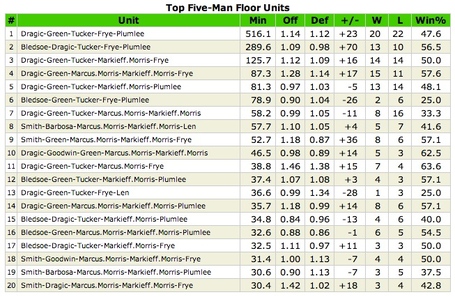 This chart shows the Suns' top 20 5-man units in order by minutes played.  The "Off" and "Def" stats are the points per possession each unit scores and allows on the floor together.  Every line-up configuration but 1 that includes Channing Frye outscores the opponents, for whatever reason, while line-up configurations with 'Kieff aren't as successful (Disclaimer: dat sample size).  But more germaine to this particular conversation, the line-up configurations that contain both Markieff Morris and Channing Frye are among the Suns' best with one notable exception: the five-man unit comprised of Ish Smith, Archie Goodwin, Marcus Morris, Markieff Morris and Channing Frye.  I'll let y'all figure out why maybe that's not the Suns' best unit (hint: lack of consistent penetration, shot creation and passing skills at the guard positions).

If you click around on the 82games.com site, you'll also see that the Suns are indeed better with Morris on the floor instead of Frye at the end of close games.  I'm not sure what the problem with this is.  I'm sure if you asked Goran Dragić or Eric Bledsoe who their favorite power forward is, the answer would be, "The one that's on the court with me."

Let's maybe stop looking at Frye and Morris as competitors for the same job and instead as complements in a rotation, like pitchers.  The Phoenix Suns have a starter and a closer.  Both are fresh and effective for the parts of the game that the coach is asking them to play.  Why must this be an either/or conversation when it is clearly a win-win for both players and the team?  The only ones who seem to be losing in this equation are us as fans.

So can we all please agree, here and now, to declare a cease-fire in the Morris-Frye Conflict until the end of the season?  This is the team we have.  These are the line-ups Jeff Hornacek has decided upon.  Markieff Morris and Channing Frye are both playing their guts out for the purple and orange.  We are in the thick of a playoff battle.  While I am a huge fan of dissent in the service of a stronger union, I believe the time has come for both sides to lay down their arms and unite in the face of not only a common foe (the rest of the Western Conference), but a common cause: the glorification and veneration of a magical Phoenix Suns squad.

Prior to this season, neither of these players looked to be playing a critical role on a playoff team: one due to life-threatening heart condition, the other due to 2 seasons plagued with inconsistency and inexperience.  Now both are thriving and integral parts of what is easily the most fun Suns' team since the Western Conference Finals squad of 2010.  They are both OUR guys.  Let's cherish them as such.  Save the debate for the off-season, which both of these dudes are doing their best to ensure comes as late as possible.

Channing Frye Cleared to Return from year away from basketball