The Phoenix Suns own the 8th spot in the West, but need to keep winning games to hold on. Hosting the New York Knicks represents the Suns best chance to win a game for the rest of the season. After this, the Suns are either on the road or hosting a Western Conference powerhouse.

Share All sharing options for: Game Preview: Phoenix Suns (43-29) host New York Knicks (30-42) in yet another "really, really need to win this" game

The Phoenix Suns, winners of 6 out of 7 games, have sole possession of the 8th playoff spot in the tough Western Conference. By contrast, at 14 games over .500 (43-29) the Suns would be 3rd in the East. Even more exciting, the Suns are only 2.5 games behind Portland for the 5th seed.

The Suns have a playoff spot with 10 games to go, but those 10 games will be tough. Thankfully, the Slash Brothers are in full-on playoff mode already. The Suns record when both Eric Bledsoe and Goran Dragic start and finish the same game: 18-5. That's 12-4 before "the injury" and 6-1 since Bledsoe returned to the starting lineup.

The Suns need to keep winning games, and especially need a win on their home court against a losing team. After tonight, the Suns finish with 6 of 9 on the road with their only home games against teams with better records: Los Angeles Clippers, Oklahoma City Thunder and Memphis Grizzlies (slightly). Ouch.

The Opponent - The Knicks

On the plus side for the Knickerbockers, the Knicks have won 9 of their last 11 games as they fight to make the playoffs in an Eastern Conference where a 30-42 record is a major challenge to the 8th seed.

Former Suns PF Amare Stoudemire has had a renaissance of late by scoring 16.5 points and pulling down 5.9 rebounds in 28 minutes a night over the last 9 games he's played.

In that same time period, J.R. Smith is scoring 15.6 points and making 46% of his threes over the past 10 games, while Tyson Chandler is dropping 10 points and pulling down 9 rebounds lately.

Carmelo Anthony has been a tremendous player for the Knicks all season (28 points, 8 rebounds, 3 assists per game), but few other players have stepped up until these past few weeks. For several months, he was on an island with only rookie Tim Hardaway Jr. exceeding expectations.

Almost-Sun Raymond Felton has been a disaster this year in New York. Former Suns Earl Clark and Shannon Brown were picked up after they were released by other teams in February and now have limited roles on the Knicks.

But hey, there's always someone who has a career game against the Suns when it's least expected. Take your pick on this team.

8th place all alone! Winners of 6 of their last 7 games!

Yes. Let's take a moment to recognize Markieff Morris for the beast he has been this season. You will see a lot of articles about his candidacy for Sixth Man of the Year but he is a longshot to win it. Chicago's Taj Gibson has nearly identical stats and plays in a bigger market much closer to the East.

Morris will also be a finalist for Most Improved, but there are so many candidates on the Suns that they may all cancel each other out. You might see a clamoring for 'most improved team' when the results come out with a non-Suns winner, followed by four Suns in the top five or six finalists (Bledsoe, Dragic, Morris and Green).

Back to Chief Keef. He speaks in low tones but is truly the Suns enforcer. His 12 technical fouls are 4th in the league, but he doesn't get those by whining about calls on his plays. He often gets those Ts defending one of his teammates. He steps in for a teammate with a puffed chest and harsh words to draw the T. Opponents often scatter when Morris and Morris materialize in a scrum.

Statistically, Keef has transformed this season. You know about the scoring and rebounding off the bench. Here are a few other nuggets, courtesy of basketball-reference.com

And he's durable. In the last two seasons, he has not been forced from a game due to injury. Consistency and durability. Exactly what coaches love.

As a postscript to the Suns section of this preview, let me just say that it's a good great week in BSotS-land when Phoenix Stan, East Bay Ray, Mike Lisboa and Scott Howard all post headline articles on our beloved team!

The Suns have not been 14 games over .500 since 2010, and now it's like old home week on BSotS. We are a better place with these luminaries back for cameo appearances.

That leaves just one question: where the hell are the others, like Wil Cantrell, Trevor Paxson and Eutychus? Or Keefy and DiM? Or any number of 2010 All-Stars who have yet to come back as the Suns rise from the ashes? 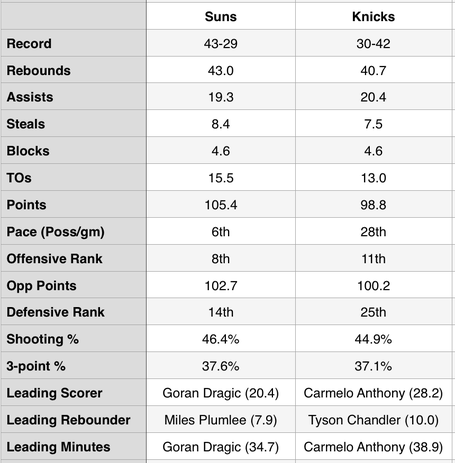 The Knicks play slow. They have the league's 28th-ranked pace, and we all know that is the Suns kryptonite more than anything else in this league. Against the league's bottom five 'pace' teams, the Suns have barely won: Memphis Grizzlies (0-3), Chicago Bulls (0-2), New York Knicks (0-1), Utah Jazz (2-2), Brooklyn Nets (0-2). That's 2-10, with the only two wins against one of the league's worst teams.

The Knicks walk into their halfcourt, pound the ball into the ground and rarely turn it over. It's effective enough to get them the 11th-rated offense in the league. The Suns will need to be patient, run when they can but not rely on the running game to win. In the half court, the Suns will have to play their Slash Brother style with pick-and-rolls from both sides of the floor to tear the Knicks up.

This is a scary game for Suns fans who want to chalk this up as one of the last "easy" wins of the seasons. The game, on the surface, looks like an easy Suns win. It's one of the last easy games on the slate.

Cross your fingers and hope the Suns don't drop this one because the pace slogs them into submission.