They weren't supposed to be here. But the Phoenix Suns now have their destiny in their own hands, and the NBA had better be ready for the Suns big stage.

Just two weeks ago, the Phoenix Suns were on the precipice. The team had lost its mojo a tiny bit, and doubt began to creep in.

They didn't doubt their talent or their futures. But they did begin to doubt their ability to make the playoffs in this most cinderella of seasons after having barely survived more than two months without their second-best player.

"Maybe if Bledsoe hadn't gotten hurt," Goran Dragic lamented after the Suns were beat down in Phoenix by the lowly Cavaliers in Eric Bledsoe's return to the rotation.

With that loss, the Suns had just finished a stretch of 13 of 18 games at home since the beginning of February, but went just 8-10 in those 18 games, capped bluntly by a 3-game losing streak.

Their leading scorer was banged up, exhausted, unable to even stand during postgame interviews. He looked like he'd been put through the ringer this season. Five times he twisted an ankle. Once he'd hit his head so hard he couldn't see straight for the rest of the game. And now there was a rib injury.

"It's like they were targeting it," he said. "Every time."

On that night, the loss to Cleveland left them as the 9th seed in a conference where only 8 teams make the playoffs.

Goran and I talked about the Suns' collective lack of playing experience, able to count only a few guys who even played  roles on a successful push to the postseason. He and Channing Frye were subs for the 2010 Suns. He started for the 2012 Rockets, but they came up just short. Bledsoe was a sub for the Clippers the last three years. Gerald Green and Miles Plumlee watched the Pacers run 2013 from the deep bench.

None, not one of them, had been a big-minutes rotation player during a successful postseason push.

And it was only going to get harder. What remained on the schedule was the opposite of what they'd just flubbed. A road-heavy schedule to finish the season had 12 of their final 18 away from the friendly confines of US Airways Center, a supposed death knell for an inexperienced team.

No. At least not yet, anyway.

Bledsoe was a breath of fresh air. His energy boosted the team even in his first start and their collective mojo has grown on a nightly basis since.

The Suns are 8-1 since Bledsoe returned to the lineup, making them 19-5 in games where the Slash Brothers (along with Frye, Plumlee and Tucker) start and finish the game. 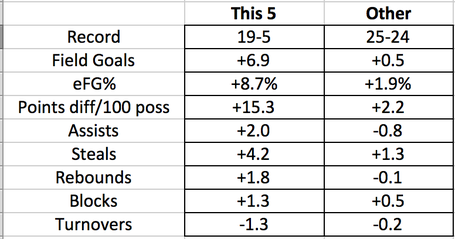 19-5, as long as Bledsoe and Dragic are there at the start and the finish.

The nickname Slash Brothers began here on Bright Side as a twist on the popular nickname given to Golden State's Curry and Thompson for their jump-shooting prowess: Splash Brothers. The Suns were about to face the duo, so I penned the nickname in the game preview just to have a little fun.

"Slash" is a great descriptor for these guys because they attack the paint first, forcing the defense to respect their ability to finish at the rim, and then either score or kick it back out to a three-point shooter or their brother to restart the process. having one of them out there at a time is tough enough to defend, but two is nearly impossible. Especially since each can be the weak-side three-point shooter for the other.

The nickname has stuck, with NBA.com now using it when promoting the Suns. Short of any household names, the national media had to latch onto something to excite the fans, and this nickname is as good as any.

Anyhoo, I digress. Back to the story of the Rising Suns.

After winning 8 of 9 games, the Phoenix Suns now find themselves right back in the catbird seat in 7th place in the West. Their hold is still tenuous, but now it's no more or less tenuous than Dallas or Memphis'.

"We are just trying to get in," coach Jeff Hornacek said last night. "We are not concerned with trying to climb the ladder and get way up there. I think when you look at some of the teams up there: Golden State, Portland - it is going to be hard to catch them unless we finish off 7 and 2 or something like that where than maybe there is a chance.

"Our schedule gets harder. We are trying to win these games we have in front of us right now. We talk about just having to win our games and we won't worry about what these other teams do."

In the last nine games, the Suns face three of their targets for postseason position: Portland (home), Dallas (away) and Memphis (home). They have already split a season series with Golden State, each winning two games.

I remember the 2010 Suns, despite a 26-7 run, still had to win their last two games to improve on their 6th seed in the West. With back-to-back wins over Utah and Denver, the Suns jumped from 6th to 3rd to start the playoffs.

Will this team make the playoffs? Very likely.

Will big wins in the final week be able to vault them into 6th or even 5th place? Quite possible.

The Suns are riding high right now, full of moxie and confidence. They KNOW how to win games. They KNOW their style is nearly unbeatable. They can defend. They can rebound. And boy can they score.

"To go from one of the worst teams in the league last year," P.J. Tucker said. "To having a chance to make the playoffs, that's the hunger right there. There's no question everybody in this locker room is committed and we all have shown that we're getting better as the year goes on. I've said all year we can win, we are one of the better teams in this league."

Watch out, NBA. The Slash Brothers and their band of merry men are ready to hit the big stage!