At 35-24, good for 7th in the West, the Phoenix Suns continue to astound the experts with their play. When Eric Bledsoe returns, the Suns 7th ranked offense and 15th ranked defense will become even more effective.

Share All sharing options for: The Phoenix Suns are having career years thanks to devastating pick-and-roll options

With the Phoenix Suns setting season highs in scoring (129) and assisting (29) on Sunday night against the struggling Hawks, now is a perfect time to celebrate just how great, and unexpected, this season has become.

The 35-24 Suns are sitting in 7th place in the West with 23 games to go - a spot almost NO ONE thought they would be at this point of the season. They are missing their second-best player and playmaker, yet are still cranking out the points and winning games.

The question is: How?

"Like I've been saying all season man," Gerald Green said on Sunday night. "It's easy playing with guys like Goran [Dragic] and Ish [Smith] who are able to create and breakdown the defense. I have the easiest job in the world, knocking down shots so I have to give my credit to them."

The pick and roll

The coaching staff has devised an offense that relies on spacing three guys on the three-point line and isolating the point guard against a single defender. A "big" comes out to pick off the defender to initiate the pick-and-roll or pick-and-pop. The Suns don't lead the league the in pick-and-roll plays, but they are pretty close to the top.

If it's Channing Frye throwing the pick, it's a devastating pick-and-pop. Per NBA.com, SportVu data shows that the Goran Dragic/Channing Frye pick-and-roll is the deadliest in the game this season, producing 1.3 points per attempt. Either Channing Frye gets open for a three, or Goran Dragic is open for a drive to the hoop or a kick-out shooter is wide open.

On Friday night, the helpers didn't leave the three-point shooters, so Dragic put together a career high game of 40 points to go with 5 assists and the Suns scored 109 points. On Sunday, the defenders reacted to force the pass and the Suns simply made 15 threes and set a season high in scoring.

Overall, the Suns pick and roll plays with any combination of players is best in the league as well, producing 1.093 points on all 2,162 possessions this season. Damn. 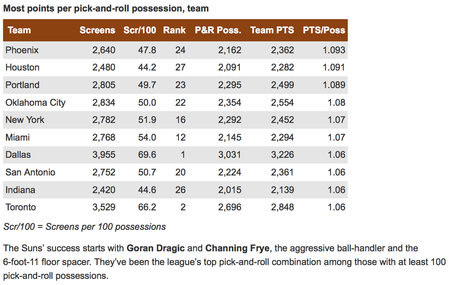 If it's Miles Plumlee or another traditional big throwing the pick, then the defense has to play for the hard roll to the hoop. Plumlee isn't much of a threat except on a hard drive, but defenses STILL have to defend it. And once they commit, the court opens up.

The Suns have the best spacing the league, and Goran Dragic is a relentless attacker. He's very different than Steve Nash was, and his results pretty good because he's more of a scorer than Nash ever was. Now that he's making more than 50% of his shots and more than 40% of his threes to keep defenses from guarding the drive, he's even more devastating.

Substitute Eric Bledsoe, Ish Smith or Leandro Barbosa for Dragic and the plays don't change a whole lot. All penetrate to set up the offense. All but Smith is a threat to bomb from long range.

And all the while, you've got Gerald Green and P.J. Tucker spotting up in the corners for threes. They make nearly 40% of those shots each, so their defenders can't help on the inevitable drives by the point guards.

All this adds up to a potent offense: 7th in offensive efficiency, 8th in True Shooting Percentage (TS% takes into account three pointers AND free throws).

The Suns are especially effective when they play two point guards at the same time, with each being the other's outlet on corner threes (in place of Gerald Green).

The second initiator allows the Suns to reset their offense as many times as necessary on a possession to get an effective pick-and-roll going, no matter what side of the floor.

Ish Smith as the secondary ball handler has some limitations in that he cannot make three-pointers, but he is aggressive enough to force the defense to react on drives anyway.

When Eric Bledsoe returns and gets re-acclimated to the offense, the Suns will be even more dangerous. Bledsoe played 5-on-5 on Saturday and will continue to play more and more until he's ready to play without sucking wind in the opening minutes. Hornacek will rely on the training staff for the go-ahead to activate Bledsoe.

Career years across the board

*all data in this article courtesy of nba.com/stats and basketball-reference.com

*Channing Frye's TS% is listed from the 2011-12 season, since he missed all of last year. He was slightly more effective that season on fewer minutes per game.

Eight of nine players in the Suns regular rotation are enjoying career highs in True Shooting Percentage, which takes into account three pointers and free throws.

While Miles Plumlee's rise is partially due to increased opportunities, most of the guys are just shooting it better than ever no matter what their minutes distribution. That's because they are taking smarter shots, and the shots they take are expected and within the flow of the offense.

*Channing Frye's PER is listed from the 2011-12 season, since he missed all of last year. He was slightly more effective that season on fewer minutes per game.

PER is a measurement developed by John Hollinger for ESPN that measures overall offensive effectiveness. You can see that not only is every player's PER higher than a year ago, it's the highest of their careers for most.

Playing the most minutes of their careers

Every single player is getting more minutes this year than last - again, the eye-popper is Miles Plumlee - and all but one is setting career high in minutes per game.

Despite people really being down on Plumlee, he is a good player for what he brings to a defense which is still ranked 15th overall in the league despite the recent downturn across the board. The Suns are competitive on the defensive end, something not credited often to Suns teams in the past.

"I think one of the most impressive things is how hard they play," Atlanta coach Jeff Budenholzer, a long time Spurs assistant, said of the Suns. "I think it's a real credit to how hard they play and to obviously Jeff Hornacek and the staff. They really get after it. Defensively, they do a lot of things to disrupt you. They're physical. I think it has been great for the whole league to watch how they play on both ends of the court."

The defense only works as long as there's a rim protector. Plumlee is 19th in the NBA among all forwards and centers in total rebound rate and block rate (17.5% and 3.9%, respectively) and pulls down 8.3 rebounds in 26 minutes per game.

And, he's still the Suns best defensive player (defensive rating 102). Plumlee is 30th among forwards and centers in defensive win shares for the season (2.3) while only being 56th in total minutes played. He's also still 22nd in the league in FG% allowed at the rim (50.2%), where the league average is about 59%.

His offensive struggles are well-documented, especially lately, but he is a necessary rim protector and rebounder.

The Suns' newest off the street acquisition, Shavlik Randolph, impressed Suns coach Jeff Hornacek in his first practice for having a "knack" for rebounding. Randolph's career rebound rate is 16.0%. Sure, that's on a small sample size (only once played more than 16 games in a season), but it's still good.

Randolph won't take Plumlee's minutes as long as Plumlee is engaged and ready to play. Plumlee gives the Suns the rim protection they need to be effective.

Can this continue into the playoffs?

Of course it can. Hornacek doesn't buy the argument that the Suns players might be tired. And you can see why, because only half of the players have already played more total minutes than last season. Plumlee and Frye are the outliers, having played more than 3,100 more minutes than a season ago already.

But everyone else is on pace to exceed their career-high minutes, so it's something to watch. The return of Eric Bledsoe will be a nice boost to the rotation, and Randolph will take Alex Len's minutes on many nights to provide a veteran presence.

The Suns can sustain their play for the rest of the season, and can potentially step up their individual efforts with slightly fewer minutes as Bledsoe rounds into form.