Going Gorilla: Who is the Suns most improved player?

In a season of wild collective accomplishment there has been prodigious individual achievement from a slew of Suns. Given the ascendance of so many players is there a correct answer as to which player has grown the most on this team?

Share All sharing options for: Going Gorilla: Who is the Suns most improved player?

When you read the title did an answer pop right into your head? Does one individual step into the forefront?

For me it isn't quite that simple. Just as the criteria for the most valuable player in the league is still somewhat nebulous to me to this very day, the selection process for most improved can be muddled by the intangible. How does one measure leadership, maturity and consistency? Does a rise to stardom trump the revival of a career?

The amelioration on the Suns is so rampant that I will be largely evading a player who has risen from D-League obscurity to become a valuable starter on one of the better teams in the league. A player who mitigated his offensive deficiencies by reinventing himself as a corner three threat that hits to a 40%+ tune. A player whose formidable brawn is exceeded only by his indomitable resolve. P.J. Tucker is one of the better testaments to the fruits of labor in the league... and even though he always seems to grab every loose ball he won't snare the honors of the most improved player on the team (in my estimation).

Here are the players, in no particular order, who I think have advanced by bounds and leaps this season.

Dragic was the most polished of this aggregate going into the season. Last season debates raged on this site over exactly where he ranked among starting point guards in this league. The consensus seemed to be that he was somewhere in the average to slightly above average range.

The season he has had makes those discussions seem almost silly. 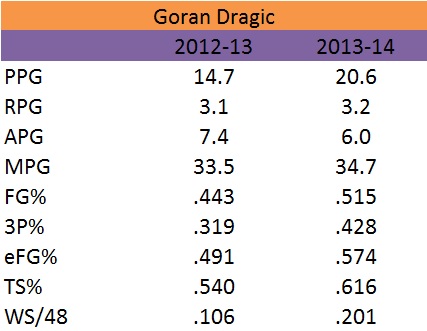 This season Dragic has compiled averages of 20.6 points, 6.0 assists, a .616 TS% and a .201 WS/48. Only Wilt Chamberlain, Magic Johnson and LeBron James have had at least as good of numbers in those four categories in a season. Not only is Goran dynamite from the field, but he is 13th in the league in free throw attempts per game (5.6). The One Man Fast Break is also the main reason the Suns are first in the league in fast break points and second in fast break efficiency.

Despite not being named an All-Star, it would seemingly be an impossible stretch of the imagination that he will not earn his first All-NBA team selection. Although there weren't clear indicators of a meteoric rise to this type of apogee, Goran had been on a steady incline over the past couple seasons and had played at an elite level over stretches. The peak of his play has been higher this season, but what has impressed me most is the duration of this level of play. Those stretches of exceptional play have become nightly occurrences.

One of my favorite parts of this season for Goran was when he set career highs for scoring three times in an eight game stretch against Golden St., Houston and New Orleans. Goran has also become the answer to a question that was asked at the beginning of the season - Whose team is this?

Bledsoe came into the season shouldering the burden of big expectations. Hindered by an injury in his sophomore season and the predicament of playing in the shadow of Chris Paul in his third, Eric hadn't seen nearly as much court time as most players of his perceived potential. Despite his freakish athleticism and other salient talents, questions bounced around about his ability to play as a true point guard as the dreaded "tweener" label was whispered about in the shadows of dark corners.

Bledsoe proved those concerns to be completely unfounded as he instead immediately gave credibility to those who gushed over his high ceiling. 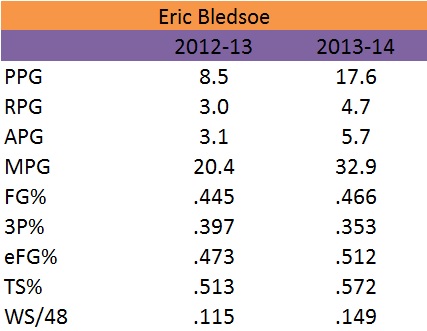 In terms of raw per game numbers, Bledsoe's increases jump off the page. But there are several areas in addition to this where his unique talent is revealed.

Bledsoe has shined for the Suns in spotlight situations this season. He is not of a diffident nature that shrinks from the moment. His assertiveness not only lets him take and make big shots in the fourth quarter, but it combines with his strength and speed to allow him to get to the rim, draw fouls and finish after contact. He is like a cannonball shooting through the lane. Defenders are helpless to stay in front of him and once they are side to side he creates separation with a chiseled physique. That's if he's not already past them.

Bledsoe nearly tripled his free throw attempts per game because of this dynamic, averaging 5.3 per contest. Despite being hampered by injuries, Eric has shown plenty in limited time to show that this season may just be the tip of the iceberg. The team is 24-10 with him in the lineup and the 24 year old Bledsoe has still been a full time starter for less than half of an NBA season.

Going into this season I thought Markieff was a player afflicted with an identity crisis. He appeared to be very content with a mismatched role as a stretch four who couldn't shoot. His biggest plus, that often translates well from college to the pros, was rebounding and even that was middling at best. I wasn't a huge fan of his body language or the way he comported himself last season. He found himself squarely in the mix of a group of players that had been pegged, fairly or unfairly, as having effort and/or entitlement issues.

I wasn't alone in my opinion that this would be another largely forgettable season for Markieff on his road to a career pathway of end of the bench journeyman irrelevance. That script got flipped. 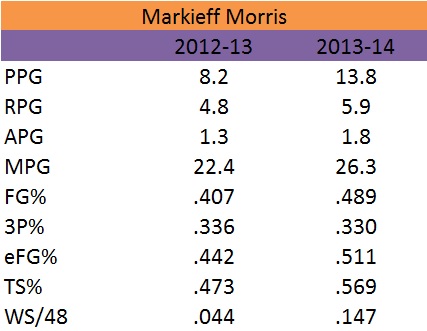 I think Markieff greatly benefited from the coaching/culture change here in Phoenix. It was like he got a fresh start in a brand new environment without even moving lockers. Morris's numbers have improved across the board, but maybe most significant are his increases in scoring and offensive efficiency. This hasn't all been a happy coincidence, though. Besides Markieff's hard work there has been a systematic focus towards making him a better player by exlpoiting his strengths on the offensive end.

Markieff is taking better shots. Better shots tend to have a higher likelihood of going in the basket. Markieff is practicing those shots to make them at a higher rate.

Last season Morris took about 45% of his shots from 16 feet or further away from the basket. This season that has dropped to about 33%. In fact, Markieff is taking over half of his shots at the rim and in the 10'-16' range. These are his best zones by shooting percentage. His conversion rate at the rim has increased from 59% to 66%. The 10'-16' shot has increased from 29% to 48%.

Morris has scored in double digits in 33 of his last 36 games. He has become the leader and steadying presence for the bench unit. He has embraced this role, too, instead of becoming a malcontent for not being inserted in the starting lineup. His maturity has been a key part of his overall growth.

Green was a castaway coming into this season. A case study of unfulfilled promise. His claim to fame was being the answer to the trivia question of which player was the last to enter the NBA straight from high school before the rule was changed to disallow this practice. He carried the ignominy of being the last in a line of failed careers of high school draftees that were part of the argument against letting precocious players in the league at such an early age.

He had bounced around to seven NBA teams and overseas. He was traded to the Suns for salary matching reasons. He has been worth every penny. 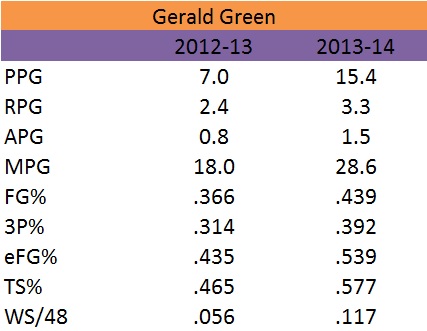 Where would this team be without Gerald Green? Probably not in the playoff hunt they find themselves serendipitously entangled in. Gerald answered the bell early in the season by filling in for Bledsoe when he was down with minor injuries. Even during this relatively brief period Green shook the label of ineffective bit role player and became a solid contributing starter. Then, when tasked with filling the vacuous void that was left in the wake of a more severe injury, Green was up to the task again.

Green has averaged 17 points per game in his 47 starts this season. In six previous seasons he started 50 games. I would argue that Green may have been the second most important player in keeping this team afloat through the meat and potatoes of the season. The Suns are 14-6 when Gerald scores at least 20 points. When he finds a rhythm it is absolutely electric.

Once again, Green is a player who is being coached to his strengths. He is averaging 6.2 three point attempts per game. That is 10th most in the NBA and accounts for more than half of his overall field goal attempts. He is doing what he is being asked to do and has mostly not tried to do too much.

Although it is hard for me to choose between players with nearly coterminous advancement, I think that I would give the nod to Markieff Morris. Of the four, he hasn't done the most this season, but he had shown me the least coming into it. Dragic was already at least a very competent starter. Many people had Bledsoe pegged as a player on the rise. Even Gerald Green had a small sample size in New Jersey that provided a glimmer of hope. Markieff, though, may have been more of a victim of circumstance.

And there is still enough season left that it's possible I might change my mind about who is the most improved before the Suns have played their final game.