Worst loss of the season.

Share All sharing options for: Recap: Playoff-hopeful Suns suffer a brutal loss to Chris Kaman and the LA Lakers

The Phoenix Suns, riding high on a six game winning streak, crashed back down to earth with a brutal loss to the Los Angeles Lakers, 115-99. This game was just a beatdown from the beginning and the Suns never really got close after the initial few minutes, save for a brief moment early in the second quarter.

The Suns looked completely out of sorts and it often appeared as if they were sleepwalking through game. Therefore, I decided it was only fitting I write this recap under the heavy influence of NyQuil (my medicine of choice to deal with a flu-like illness as well as Suns-induced symptoms of disgust and nausea.

In my preview for the game, I poked fun at Chris Kaman pretending to nap on the Lakers' bench during a game several weeks ago. Well, he decided to go ahead and have his best game of the season today. Right from the start, Kaman looked active and energized, firing shot after shot early in the game and simply taking Miles Plumlee to school. In fact, it was the Suns who looked like they were laying down early, as they just couldn't get into an offensive rhythm and made matters worse by playing putrid defense against the juggernauts on LA's roster.

Goran Dragic was the only Sun that played anything that resembled the sport of basketball in the early going--while The Dragon went 3-5 in the first, the non-Slovenian players on the Suns shot 17%. Phoenix shot just 25% as a whole against the second-worst defense in the NBA and they found themselves trailing 26-15 after one.

The Suns began the second period on a better note and managed to cut the Lakers lead to just three after a three-pointer from Marcus Morris.

With Phoenix trailing 31-28, I decided to head to the pharmacy to purchase some NyQuil because I don't like being sick. As I was checking out, I pulled up the score on my phone and saw the Suns were trailing by 18. I contemplated purchasing some Crown Royal as well to destroy my memories of this game enjoy its great, smooth taste. But alas, I just bought extra NyQuil to prepare for the second half. I have no idea what happened in the second quarter but I imagine it went something like this:

One would expect the Phoenix Suns (who have shown the ability to adjust and come back from setbacks all season) to come out angry and aggressive in the second half to try and attack the Lakers and their 18 point lead. One would also expect Jordan Hill's hair to be a physical impossibility...but one would be wrong in both these instances.

The following stretch at the start of the third quarter tragically sums up the entire game:

On the first possession of the second half, the Suns committed a 24 second shot clock violation (because, you know, when one of the worst teams in the NBA outscores you by 18 in one half and you spend halftime reviewing what went wrong and where to make adjustments, failing to even put up a shot on the very first possession of the second half is a wonderfully sound strategy).

Then I realized I couldn't breathe out of my nose so I took some NyQuil--also, I wanted to get a better sense of what it felt like to be as loopy as the Phoenix Suns looked to be tonight.

After winning the third period 31-28, the Suns faced a 15 point deficit heading into the fourth. They managed to cut the lead to 10 or so at one point, but never really made it interesting. Chris Kaman (28 points and 17 rebounds!!!!!!), Jodie Meeks (22 points) and Kendall Marshall (13 points and 11 assists) were just too much for the Suns to overcome.*

*Writing that last sentence made me want to throw up. 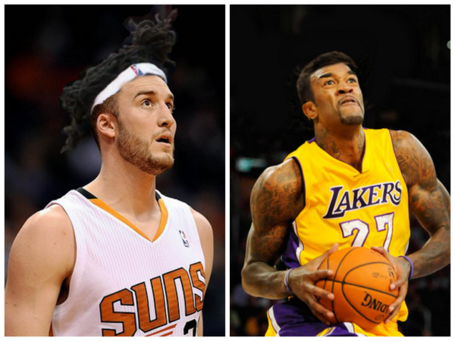 This was just an all-around awful effort from the Suns tonight, one that was reminiscent of last year's team. Fortunately for Phoenix, the Grizzlies lost to Portland and the Warriors dropped a game at home to the lowly Knicks, so the Suns were able to maintain their #7 position in the Western Conference.
But a loss to this Lakers team, especially in the manner this game was played in, is worrisome for a Suns squad that has a tough 8 games remaining. In the end though, this was just one game.
They're going to have to forget this game quickly  and come out with a much better performance at home against the Clippers on Wednesday. Oh, and by the way, those Clippers beat the Lakers by 48 points earlier in March.
Now if you'll excuse me, I'm going to go pass the **** out.