Now the going gets tough for the Phoenix Suns, beginning with a home date against the Los Angeles Clippers who might just want to avenge that 19-point drubbing they got in December. Chris Paul, Blake Griffin and DeAndre Jordan look to continue their winning ways in the desert on Tuesday night.

The last time the Phoenix Suns and Los Angeles Clippers met, the Suns were streaking and blew the Clippers off the court with a 19-point win on December 30.

But since then, the Clippers have amped up their play despite losing their All-World PG Chris Paul for a while, going 20-8 since the start of 2014 and strengthening their hold on the Pacific division. The Suns, meanwhile, have stayed afloat without Eric Bledsoe, going 16-13 over that time span.

Chris Paul is back with the Clippers, but both teams look to get even better as the season wears on. Soon, Eric Bledsoe will return for the Suns after missing time from a knee injury, while the Clippers hope that buyout season was good for them as they incorporate Danny Granger and Glen Davis into their rotation for the rest of the season.

The Los Angeles Clippers are on a roll. They have won 6 of 8 games, including the last 4 straight. After staying strong against the Suns on Friday night, the New Orleans Pelicans got blasted by these Clippers by 30 points on Sunday night.

Blake Griffin (28.9) and Jamal Crawford* (23.8) have been outstanding lately for the Clippers as they rotate in new acquisitions on a seemingly weekly basis. The latest twist has Glen Davis in the mix at backup PF/C and Danny Granger taking the latest turn at the SF position, beginning Tuesday against the Suns. Granger may not start, but he is seen as the starter of the future in LaLa Land. The Clippers hope he's still a starting-caliber player.

While Jared Dudley's role seems to be shrinking and J.J. Redick just can't seem to get healthy, the Clippers have been trying different combinations at the wing spots all season. The latest twist has backup PG Darren Collison starting next to Chris Paul in the back court (imagine that - a two-PG lineup), with Matt Barnes starting at SF. Prior to that, Sasha Vujacic, Antawn Jamison and Hedo Turkoglu got minutes and prior to that it was Willie Green.

Still, Crawford, Griffin and Jordan have been stellar all season while the Clippers maintain their 4th spot in the standings with a 41-20 record even while Chris Paul missed a lot of time after the first of the year. But now Paul is even back, and the Clippers are poised to go on a run as long as they can figure out their rotation at the wing spots.

We are getting to the point in the season where coaches need consistency more than anything else. No matter a player's talent level, they need to know what level of talent each player will bring on a given night. Sure, there are hot and cold streaks but effort level, focus and team play must take a front seat.

So when a player is underperforming, the coach likes to know he can turn to someone maybe less talented but more predictable. Such was the case on Sunday night when newcomer Shavlik Randolph played nearly as many minutes (10:14) as Miles Plumlee (11:45).

"I did see [Miles] hurt the ankle," coach Hornacek said of Miles Plumlee's ill-fated attempt to back down Elton Brand in the first quarter of Sunday's game. "But we just decided to go with somebody else. Markieff was in there (31 minutes) and Shavlik did a good job in the first half helping out. So, if guys are hurt or, or not doing something, the other guys will step up."

Playing Markieff Morris or Shavlik Randolph at the center position is not good for your defense long term. But if you need to send a message to a player that he can be replaced, you do it.

Plumlee is struggling right now, but he is the key to their defense being effective. It's no coincidence that Miles Plumlee's struggles mirror those of the Suns defense.

As scary as it is, the truth is there. As Miles Plumlee goes, the Suns defense goes. Alex Len's moments will be fleeting this season. Shavlik Randolph will be effective in spurts but won't deter shots. Markief Morris is a better offensive player than defensive center.

The Suns need Plumlee to produce if they are going to make the playoffs.

The going is about to get real tough, with 14 of the Suns' last 23 games on the road as they fight to stay in the playoff hunt. With the Suns being the least experienced of all the playoff contenders, conventional wisdom says the Suns will struggle through this stretch. 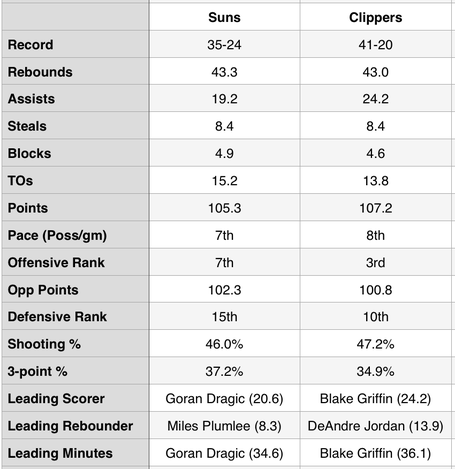 Newly signed Danny Granger will eventually start for the Clippers, but maybe not in his first game in LaLa Land. But since Jamal Crawford is expected to miss Tuesday's game against the Suns, Granger may get a good deal of playing time.

While the fun will be all about watching Goran Dragic match up against Chris Paul is a contrast of styles, the real battle will be under the hoop.

The Clippers have been carried all season by the front court duo of Blake Griffin and DeAndre Jordan, who each play 36 minutes a game. Griffin is likely to posterize someone every night, while Jordan erases more shots and grabs more rebounds than most any player in the game.

The Suns' undersized front court will have to hold their own in this game. Channing Frye will have to pull Jordan away from the basket with the perimeter threat he poses, and be effective in that role. Miles Plumlee and Markieff Morris will have to box out when they are in the game, and fight for positioning to allow the Suns to stay respectable on the boards.

It's tough to see the Suns winning this game, with the way their defense has been a sieve over the past week. The Clippers have the league's third best offense (111.5 points per 100 possessions, behind the stylings of former coach Alvin Gentry) while the Suns have given up 113.3 points per 100 possessions over the past week. Not a good combination.

The Suns will have to reverse recent course in order to win, something they are quite capable of doing but the odds are against a turnaround at this time.