After missing a year with an enlarged heart, Channing Frye is now being recognized for having an over-large heart on and off the court.

We all know that Channing Frye is a good guy, and his story is quite inspiring. His name itself mean "buffet of goodness". Now, former NBA players are showing respect for how he approaches and plays the game.

Phoenix Suns forward Channing Frye has been named a finalist for the 2013-14 NBA Sportsmanship Award, an honor that reflects the ideals of sportsmanship, ethical behavior, fair play and integrity.

Frye (Pacific) is one of six divisional winners, which include Boston's Jeff Green (Atlantic), Milwaukee's Mike Dunleavy (Central), Washington's Bradley Beal (Southeast), Portland's Damian Lillard (Northwest), and Memphis' Mike Conley (Southwest). Each team nominated one of its players for the award, with former NBA players selecting the six divisional winners from a pool of 30 nominees.

Frye missed all of last season with an enlarged heart - a viral condition with no cure other than rest and relaxation. There was no guarantee Frye would live, let alone play basketball again.

"Nothing is more important to us than the health and well-being of our players," said Suns President of Basketball Operations Lon Babby. "Channing and his family have the full support of our organization. His health is our primary concern and we are committed to helping him in any way he needs."

A year of rest, golf and yoga later, he was cleared by multiple doctors and finally by the Suns to return at the beginning of training camp.

He did not exercise, or even break a sweat, for a full year. Suddenly, he's back on the practice floor a month before regular games begin. When he began working out with the team, Frye warned that he might not be ready by the beginning of the season. But he progressed quickly, and never had any restrictions or setbacks.

When the season began, Frye found himself in the starting lineup and he has never left it. Frye leads the team in games played and starts (78). The only Marcus Morris and Gerald Green have likewise played all 78 games, both coming off the bench for many of them.

I can't tell you how mind boggling it is that after taking a year off he has never had a physical setback. NBA basketball is no joke. The greatest athletes in the world congregate to some of the toughest endurance sports, including soccer/football and basketball.

Channing Frye is one of those athletes.

The greatest recipient of Frye's influence on the game has been his connection with Goran Dragic. Together, they lead the league in points per pick-and-roll possession (1.3). Even more than actual scoring, the threat of the score is what makes the Suns offense run.

Frye forces the defense to hug up on him at the three-point line, which opens the lane for drivers like Dragic and Eric Bledsoe to pick apart the defense.

Dragic explained it to Zach Lowe of grantland.com last week.

How much easier is your life when you can run a pick-and-roll with Channing Frye - a screener who can kill teams with outside shots?

Oh, man, a lot easier. It's a huge difference from this year to last year, when Channing was out. Everybody was so much inside the paint, that you could not create. You could not get to the inside. And right now, it's so much easier. They're so afraid he's going to knock down shots.

Defenders just have to stick to him, instead of helping against you as you go around the pick.

They have to be close to him. And that's one man less in the paint. It's so much easier.

Exactly. My guy is already on the side of me, and it's just much easier to penetrate. And if they help, of course, I'm going to find Channing.

Frye is a lifetime 38.5% three-point shooter who was well over 40% this season until recently.

But it hasn't all been roses and daisies this year for Frye. He likely denies it, but it's clear to many that his body has slowed down in the second half of the season. He is not moving as quickly (and he never did move that quickly) and is missing many of his shots.

His three-point percentages are dipping precipitously by the month:

Just in the last week, Frye sandwiched a 4-for-5 streak against the Clippers with 0-10 duds immediately before and after that run. At the same time, his rebounds per game have dropped from 5.7 in December to 3.0 per game in April.
But you still cannot discount the impact that Frye imposes on the opponents' defense. He is a career 40% shooter on three pointers, so they cannot leave him open at the three-point line even if he's in a slump. Frye could break out of that slump any time given enough opportunities and he won't stop trying.
Coaches cannot afford to ignore any Suns shooter, except maybe Ish Smith behind the three-point line that is.
ESPN just rolled out a new stat called 'Real Plus Minus'.

Drawing on advanced statistical modeling techniques (and the analytical wizardry of RPM developer Jeremias Engelmann, formerly of the Phoenix Suns), the metric isolates the unique plus-minus impact of each NBA player by adjusting for the effects of each teammate and opposing player.
The RPM model sifts through more than 230,000 possessions each NBA season to tease apart the "real" plus-minus effects attributable to each player, employing techniques similar to those used by scientific researchers when they need to model the effects of numerous variables at the same time.
RPM estimates how many points each player adds or subtracts, on average, to his team's net scoring margin for each 100 possessions played. The RPM model also yields separate ratings for the player's impact on both ends of the court: offensive RPM (ORPM) and defensive RPM (DRPM).

The stat is intended to point out the contributions of players that go beyond the box score. We have always known that some guys have a bigger impact on the game than others. There are also some guys who look better than they are because they play most of their minutes with the team's best players.
Guess who the Suns' best "Real Plus Minus" player is? 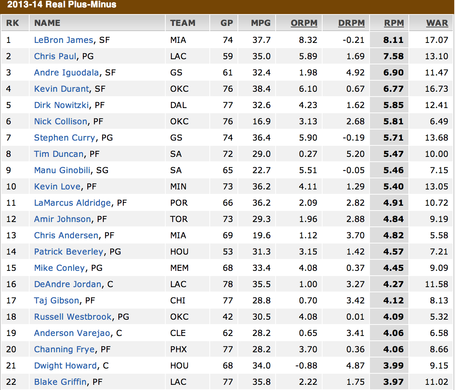 You guessed it. The Suns own Channing Frye leads the team in this new stat. Looking at the list, it passes "the smell test" for the most part but of course it isn't perfect.
Other Suns made the list as well. Goran Dragic is 26th in the league, while Eric Bledsoe is 31st. That's three of the league's top 31 players from the Suns. Not bad at all.
Still, it's nice to see Channing leading the way on something like this. Goran Dragic swears Channing is the lynchpin for this team. Opposing coaches have said their biggest worry is Channing Frye. After Frye burned them in the first quarter last month, the Wizards simply assigned Trevor Ariza to hug up on Frye the rest of the game. That took Frye out of the equation, but opened up the floor for everyone else, just as Dragic described to Lowe above.
As the season comes to a close, you know that Channing is chomping at the bit to break out of his slump. Hopefully, his body respond and he will find his stroke in the closing games of the season, as well as the playoffs.
In the process, we also hope he wins this Sportsmanship Award. At least, he won the Pacific Division!