Somehow, some way the NBA had the foresight to schedule a play-in tournament to win the last two playoff berths in the Western Conference. It starts tonight as the Phoenix Suns play the Dallas Mavericks in the Big D.

When was the last time three teams were basically tied for two playoff spots going into the final few games? Even more rare, when have those teams been scheduled for a round-robin play-in tournament?

The Phoenix Suns, Dallas Mavericks and Memphis Grizzlies all play each other in two of each team's last three games - the first of which is tonight when the Suns face the Mavericks in Dallas.

I will leave the details of the playoff scenarios for Scott Howard this morning. He can break down the possibilities while fans wallow in anger and depression over losing to the league's best team for the past 18 years on their home court last night.

Today is a new day.

And let me be the first to report that there is a 99.9999999999% chance Goran Dragic will start alongside Eric Bledsoe against Dallas.

No, I don't have any new news. But knowing how competitive Dragic and coach Hornacek are, and how important this game is to the season, I expect Dragic to be in the lineup unless his foot snaps off entirely. And even then, I can see him wheeling out the Rolleraid and still putting up 30 on the Mavs.

The Opponent - The Mavericks

While the Phoenix Suns are getting much of the publicity from coming out of no where this season, you have to tip your cap to the Dallas Mavericks for being able to do much the same thing.

Both teams saw their successful runs dismantled by age, trades and free agency in recent years. But while the Suns finally went young, the Mavericks decided to ride the vet-heavy train as long as Dirk Nowtizki is still around the conduct it.

The Suns patchworked a veteran roster together while Steve Nash and Grant Hill rode into the sunset, just as the Mavs are doing for Dirk. The difference is that (a) Dirk is still really, really, really good and (b) the veterans Dallas signed are better than the one the Suns signed.

Dallas surrounded Dirk with two guards who can run a great offense around him - Monta Ellis and Jose Calderon. While I'd argue those two are overpaid, they have helped the Mavs put up more wins this season than anyone anticipated. Veterand Sam Dalembert has been an unexpected anchor in the middle of late as well.

Dallas still can't defend very well, and as I wrote the other day they have not beaten good teams over the past couple of months (5-8 against playoff-seeded Western conference teams over their last 26 total games now).

But they still have Dirk, and they have a leg up on their counterparts in this playoff chase with one more win (48) and only needing to beat one of the Suns or Grizzlies to make the playoffs. Good on the Mavs. Here's hoping that win comes over the Grizzlies, who they are 3-0 against this season.

Going into the second half against the Spurs last night, leading by 13 without Dragic, it appeared the Suns might just run the table on the rest of the season. That's how good they'd been playing by getting up 17 on the Clippers (before losing to Chris Paul's heroics), pasting the Trailblazers, outlasting the Thunder and taking care of business against the Pelicans.

But those last two quarters were dreadful. The Spurs outscored the Suns by 21, and now many of us wonder if the Suns' clock might have suddenly struck midnight and the Mavs and Grizz might embarrass the Suns over the next three days.

Young playmaker Eric Bledsoe nearly had a triple double (30 points, 11 rebounds, 9 assists) but committed big turnovers at inopportune times, showing he's not fully mature yet and really needs the Dragon at his side in these tight moments. After the game, Bledsoe was derided as selfish by some, highlighted by an assist attempt of all things. Such is the life of a fan trying to lay blame somewhere, anywhere after a tough loss.

What a ride, huh?

With 47 wins, the Suns have already won more games than any Suns team in four years and the future is brighter than it's been in almost a decade.

After the Suns lost the game at home against the Clippers, it appeared the writing was on the wall back then (9 long days ago). If you can't hold a 17-point lead at home, you're not a playoff team. But then the Blazers and Thunder found out the hard way the Suns season was NOT over yet. 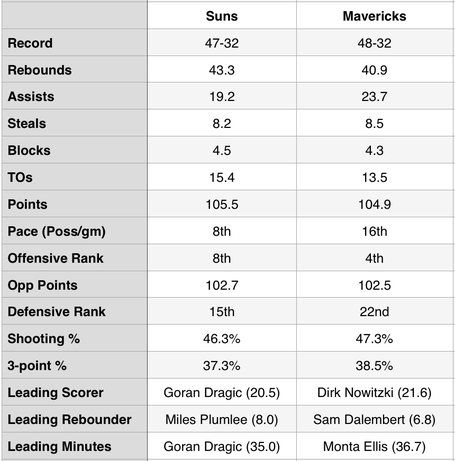 The obvious match-up is to point to Dirk vs. anyone who's going to guard him, or with Dragic/Bledsoe vs. Ellis/Calderon, but I'm going to switch it up here.

All of those guys will get their points, rebounds, assists tonight. The difference in the game will be the supporting players. Just like last night against the Spurs, it's all about who steps up from the shadows.

My matchup to watch is the battle of high-energy small forwards - Shawn Marion and P.J. Tucker - and the battle of microwave shooters off the bench - Vince Carter and Gerald Green.

If Marion and Carter outplay Tucker and Green, the Suns are going to have a really tough time winning the game, and vice versa.

Both Marion and Carter are former Suns who love to run it in the Suns faces that they were let go so unceremoniously. This is the perfect opportunity to lay it on the Suns by cementing their playoff spot and effectively knocking the Suns out at the same time. Both players are on their last legs - Carter is 92 years old while Marion is approaching 100 - so this may be their last chance to do serious damage to their former team.

In the Suns' favor, Dallas is 16-10 since the All-Star break have lost 8 of their last 13 against West playoff teams. They score a lot of points at home, but give up a lot of points too.

The Suns are 17-11 since the break and have won 10 of their last 15 against Western playoff seeded teams.

Expect a barn burner. The Suns and Mavs will fight tooth and nail, dive for every loose ball and will win on who makes the most hero shots.