It may feel like the Suns are just playing out the string after tough losses in Texas over the weekend, but the Suns still have a chance to make the dance if they can beat the Grizzlies.

Hurtling toward the end of an unexpectedly thrilling season, the Phoenix Suns appear to have stumbled in the stretch run just enough to finish 9th in a race with only 8 winners.

Goran Dragic re-twisted his ankle just before the toughest games of the year, and the Suns just didn't have the horses to beat San Antonio or Dallas on the road over the weekend.

For the Suns to make the playoffs, they need the Mac truck called the Memphis Grizzlies to match their stumble. The Suns can cause a bit of a bobble tonight, but they need the Grizzlies to complete the fall on their own on Wednesday night against the Mavericks team with little to nothing to play for.

If the Suns beat the Grizzlies tonight, the 49-win Mavericks will finish no lower than 7th in the West. There is a small chance the Golden State Warriors (also with 49 wins) will give the Mavs a chance at 6th with a win over Memphis, but the Warriors just need one more win over either Denver or Minnesota to secure 6th regardless what Dallas does.

But at least we're saying there's a chance.

The Opponent - The Grizzlies

The Grizzlies did what they needed to do to control their own destiny in the playoff race. They beat the teams they were supposed to beat and pulled off an upset of the Miami Heat in the past week.

The Grizzlies current starting lineup of Mike Conley, Courtney Lee, Tayshawn Prince, Zach Randolph and Marc Gasol is 25-8 together - even better than the Suns' best lineup - and have looked like a playoff team for a while now. The Grizzlies' problem was health - they were pretty bad (except against the Suns) when Marc Gasol missed a few weeks with a knee injury.

Grizzlies are the league's slowest team, ranking 30th in pace as they walk the ball up the court and pound it inside to the post for Marc Gasol and Zach Randolph to eat up the opponent. Unfortunately, this style is kryptonite to the Suns and we might see tonight that the Suns just don't have an answer. The Grizz might score 60-70 points in the paint, and the Suns only chance might be to get on fire from the three-point line.

The Suns have won 11 of their last 14 starts with Goran Dragic and Eric Bledsoe sharing the backcourt, and Channing Frye, Miles Plumlee and P.J. Tucker along the front line. Overall, the Suns are 23-10 with this lineup despite losing three of those games because Dragic was either severely hobbled or left the game due to injury.

This has been such a tough year physically for Goran Dragic even while he's been playing at an All-Star level. No guard in the last 20 years has matched Goran's 20+ points per game on 50+% FG shooting and 40+% three-point shooting. Dragic has suffered a half-dozen ankle injuries, the latest of which may just have put the nail in the coffin of the Suns playoff hopes.

Dragic missed Friday night's loss and hobbled through Saturday's loss, producing only 13 points in 40 minutes on Saturday against a porous Dallas D.

Next to him, young guard Eric Bledsoe has taken over and tried to will the Suns to a win with his elite athleticism and effort but ultimately hurt the team with his inexperience. In the two games, Bledsoe averaged 29.5 points, 7.5 rebounds, 7.5 assists, 5 steals and a whopping 7 turnovers.

On Friday, he had a drive to the hoop that could have pulled the Suns within 2 in the final minute but he chose to pass out to an open Channing Frye for a three-pointer.

On Saturday, he had a drive to the hoop that could have tied the game with 10 seconds left and this time he took the shot but his layup was blocked on a great defensive play by Brandan Wright, who rotated on help defense.

Add in costly turnovers - 14 over the two games - and Bledsoe just didn't have the experience it takes to close out a tough game against playoff-caliber competition. But this year was always supposed to be a learning experience, since Bledsoe had never been "the man" in late game situations before. Expect his decision-making to improve over the years.

The Dallas game on Saturday night was a microcosm of Bledsoe's great potential and costly inexperience. With his team down eight points in the final two minutes, Bledsoe led a 7-0 run with 5 points, 1 steal and another forced turnover to give the Suns several chances to tie or take the lead in the final minute.

All plays borne of aggression and effort, but ultimately showed his inexperience. If Green had hit that runner to take the lead, Bledsoe would be hailed a hero. There would have been 25 seconds on the clock, leaving the Suns with a final-shot opportunity if Dallas had scored on the ensuing possession.

But Green missed, and then Bledsoe got blocked a few seconds later and the Suns came up short. Unfortunately, Goran Dragic was a shadow of himself or he could have helped close out that game.

Now, the Suns have to hope for help to make the playoffs, and they have to figure out how to beat a team they cannot seem to beat - the Memphis Grizzlies. 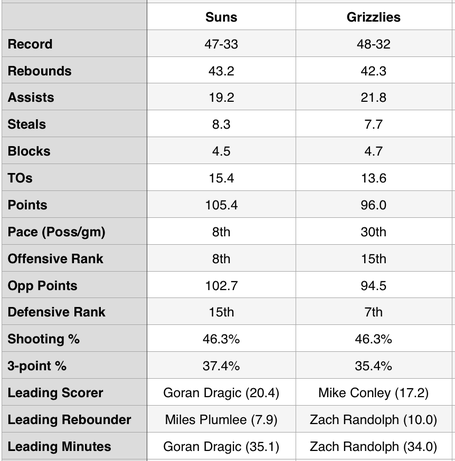 You can bet Dragic will play in this game, no matter what shape his ankle is in. He's too much of a competitor.

There's no other place to watch than the painted area on both ends of the court. The Grizzlies will try to pound it inside with Marc Gasol and Zach Randolph until the Suns yell uncle. The Suns are 0-3 against the Grizzlies, even though the Grizz haven't played their full lineup in any of those games. It's the style that kills the Suns. If not Randolph and Gasol, it's Davis and Koufos killing them.

The Suns will have to find their inner sand bucket and make the scoring somewhat even down low if they are to have a chance to finish the home schedule with a win.

The Suns will be playing for pride and a flicker of playoff hope, but the Grizzlies are the worst kind of team to face right now.

Maybe they should call Alvin or Lindsey for a game plan. Somehow, the Suns won the season series against an even stronger Memphis team a year ago despite suffering their own worst season in 40 years.

I'd love to say the Suns will win this one, but I don't have a good feeling about it.

Yet after watching the Spurs clinch the #1 spot on Friday, and watching Dallas clinch a playoff berth on Saturday, the last thing the Suns want is to allow the Grizzlies to become the third consecutive team to clinch their playoff position by beating the Suns.