The Suns are in great shape going forward, with a 48-34 team and a ton of picks and cap space to add to the fun. Let's review what's to come this summer.

We have all summer to delve into this issue further, and believe me we will do just that. However, on the first day of the offseason it's time to set the stage for what's to come.

The Phoenix Suns finished with a 48-34 record, tied for the most wins by a team not to reach the playoffs. In the automated power rankings on ESPN that factors in recent play, strength of schedule, and offensive and defensive efficiency, the Suns finished the season ranked sixth overall.

But they didn't make the 16-team playoff field.

Minnesota, so far, has kept their top-13 protected pick. But if the Suns somehow jump to the top of the lottery, that would push Minnesota down one rung and... the pick would go to Phoenix.

But let's assume the 98.5% chance the Suns stay right where they are.

The Suns will enter 2014 NBA Draft season with three picks in the first round:

The Suns also are one of only a small handful of teams that still have 2013-14 cap space that can be used to absorb salaries during the draft in trades.

The Suns still have up to 3 first round picks in the 2015 NBA Draft to use in trades as well.

Going into the summer, the Suns will have two starters enter restricted free agency: Eric Bledsoe and P.J. Tucker. Each player will have a 'cap hold' against the Suns' salary cap until they sign a contract with someone, anyone.

That's just over $11.4 million in cap holds - money they cannot spend in free agency even though the players are not under contract.

The only way that number changes is when (a) Bledsoe and/or Tucker sign an offer sheet or contract after July 1 and/or (b) the Suns trade one or more of the picks.

Unless the Suns renounce the rights to Emeka Okafor, they will have a cap hold - money they cannot spend - of $19.18 million this summer. Expect the Suns to renounce his rights.

Frye just might opt out, with the intention to sign a longer-term deal that just might be less per year than $6.8 million in exchange for security. He talked about that this week - wanting security. He did not mention accepting less, money, but that's usually how it goes.

If that happens, the Suns cap space shrinks until his contract is signed, which cannot happen before the moratorium ends in July 11 at earliest.

Dionte Christmas has a deal for $1.15 million that is not guaranteed until July 31. He just might be used a salary filler in a trade in July, where the receiving team can release him after the deal is done.

Or, he might just be kept on the team as a great, great 12th man. There isn't a better cheerleader and locker room presence as 12th man out there.

Ish Smith and Shavlik Randolph are not under contract yet for next season, but the Suns do have the right to give them a contract for the minimum next year just by exercising an option.

The Suns have 8 players on guaranteed deals, including Frye, for the 2014-15 season. Below is a breakdown, in order largest salary to smallest salary of the Suns cap situation, per shamsports.com 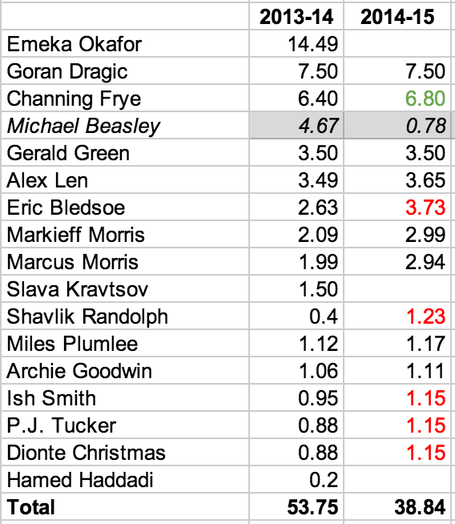 These numbers are a bit misleading, as they include Eric Bledsoe's $3.73 million contract which he will never sign. Bledsoe does have the option to sign that deal and become unrestricted next summer but no player ever does that unless no one wants them and that's their last resort.

As far as guaranteed deals go, including Frye's player option, the cap total is only about $30 million.

But even then, the Suns do NOT have more than $31 million to spend in free agency. You have to discount the cap holds as well. 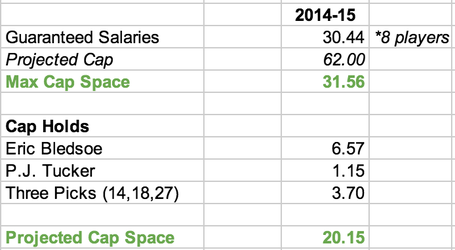 So, that's just about $20 million to spend while Bledsoe and Tucker are still just cap holds. Once they sign contracts, their cap number will change accordingly.

It's possible the Suns would sign a free agent for up to $20 million before Bledsoe and/or Tucker sign contracts/offers.

There you go, Suns fans. Not only do the Suns return their 48-34 pieces, but they can add up to $20 million in new pieces PLUS three more draft picks.