The Phoenix Suns are 5-0 this season coming off a 10+-point loss, and will need to stretch that to 6-0 in order to stay in playoff position with just 8 games left in the season.

Share All sharing options for: Game Preview: Phoenix Suns (44-30) host Los Angeles Clippers (53-22) with their playoff lives on the line

Look, every single day until the end of the season is gonna be a nail biter. Stock up at Total Wine. Hit the Costco for TV-side snacks in bulk. Hunker down.

After beating the Knicks last Friday night, the Suns had a hold on the 7th position in the West on the strength of a 6-game winning streak. Even after losing to the Lakers on Sunday, the Suns still held onto 7th.

Since then, they have not played a game but their playoff position has changed twice. They dropped to 9th on Monday night, then rose back up to 8th on Tuesday. Tonight, the Suns get a chance to resume their control of their own destiny. The playoffs have started, as far as the Suns are concerned. Their next seven games are either on the road, or against Western playoff teams, or both. Only the season-ender - at home against Sacramento - could be considered a "should win" but that only matters if the Suns win at least 3 or 4 of these 7 upcoming games.

The Opponent - The Clippers

The Clippers have managed to string together a great season despite having myriad injuries to their wing players. J.J. Redick has barely played this season, and Jamal Crawford has been in and out of the lineup for weeks. Jared Dudley has had tweaks, and has not made enough shots to justify keeping in the starting lineup.

But the Clippers solution has been to add firepower off the waiver wire - Danny Granger - and start a two-PG lineup with Chris Paul and Darren Collison pushing the pace all game long.

Eric Bledsoe did not play in the two Suns losses, but he also only scored 7 points in the lone Suns win. After seeing the sheer size of the egg Bledsoe laid against the Lakers in LA, and the total of 7 points he's scored against the Clippers this season, you might wonder if Bledsoe will has a soft spot for LaLa Land.

But the Suns did blow the Clips away in LaLa Land on December 30, the last time the Suns were at full strength against them.

Be sure to check out the podcast today - a special edition with ClipperSteve and our own Kris Habbas talking about these teams and tonight's game.

Also coming later is a Q and A with Steve.

We've talked a lot about this for the past few days, so I won't dwell on it. But I still can't understand what Suns team showed up on Sunday in LA to lose like that. What a waste a good opportunity.

Anyway, we move on. The Suns are back in 8th, where they were a week ago. Still 14 games over .500, and still facing season-ending "play in" games against both Dallas and Memphis.

What you can expect tonight, based on performances so far this season, is that the Suns will play a LOT better than they did against Los Angeles.

The Suns are 5-0 this season after losing the previous game by 10+ points, with three of those bounce-back wins coming against Western Conference playoff teams. 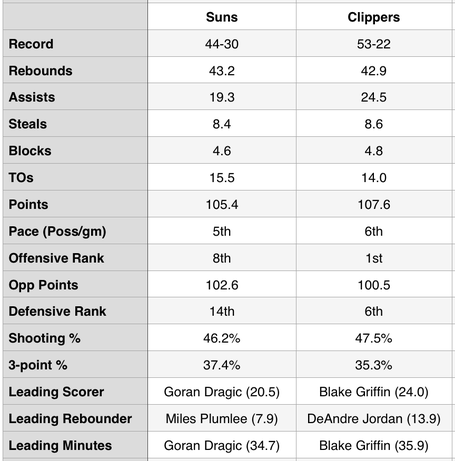 *Jared Dudley started at small-ball PF the other night while Griffin sat out. Griffin is questionable tonight.

It's got to Chris Paul against his former protege Eric Bledsoe. But on a larger scale, you'll notice that the Clippers are starting both of their point guards on a nightly basis, Paul and Darren Collison, just like the Suns start their PGs, The Slash Brothers.

It will be a battle of the two-headed mosters. This is the point where we thank Vinny Del Negro for refusing to play Paul and Bledsoe together last year, prompting the Clippers to trade Bledsoe for peanuts despite having another year under contract for cheap. But their problem is our solution.

The Suns are smarting from that butt-whooping in LA on Sunday, and from two straight losses to the Clippers as well. Look for the Suns to win the back court battle.

The Suns need this win a lot more than the Clippers do. I see the Suns going small a lot tonight, trying to draw Jordan away from the basket with Channing Frye and Markieff Morris at center for most of the minutes. If Frye can break out of his shooting slump and make a few threes to kick off the game, the Suns will coast.