Around the NBA: NBA Awards

Time to hand out some awards.

Share All sharing options for: Around the NBA: NBA Awards

The NBA regular season is officially over. That means it is time to hand out some meaningless awards to players who will never see them. Everyone else is doing it, so I felt obligated to throw my picks out there as well.

My criteria is different for each award and is completely arbitrary. If you disagree with my selections, you are wrong.

Without further ado, here are my awards. I spent a lot of time making these, so I hope the recipients appreciate them.

Coach of the Year

There are a lot of deserving coaches this year. Some of them have been winning for years, while others have impressed in their first season.

Steve Clifford has done a terrific job turning the Bobcats around in one year. They went from a laughingstock to a playoff team and are playing some of the best defense of anybody right now.

Everyone here knows just how good of a job Jeff Hornacek has done for Phoenix. The Suns improved by 23 games from the previous season. They were 28th in offensive rating and 23rd in defensive rating a year ago, and this year they jumped to eight and 15th, respectively. 11 of the 15 players on the roster had a career year (the other four being Channing Frye coming back after a year off, Leandro Barbosa, Shavlik Randolph and Slava Kravtsov). The Suns were one of the best stories league-wide this season, and that's due in large part to the work of Jeff Hornacek.

Gregg Popovich led the San Antonio Spurs to the top record in the NBA, finishing as the only team to crack the 60-win barrier at 62-20. The only three players on the roster to play 75 games or more are Patty Mills, Marco Belinelli and Boris Diaw. The regular starting five combined to miss 75 games, while Manu Ginobili missed another 14. The Spurs are a machine, and Pop is the engineer.

No Derrick Rose, Luol Deng traded away mid-year and Jimmy Butler missing 15 games, yet Tom Thibodeau refuses to let his team lose. The 48-34 Bulls clinched the No. 4 seed in the East. Joakim Noah has elevated himself to All-NBA status and Thibodeau has found a way for his team to win despite having one of the very worst offenses in the league - namely, one of the two best defenses in the NBA.

Doc Rivers has done wonders for the Clippers and their big men in particular as Blake Griffin and DeAndre Jordan have both made big leaps this year. The Clippers hold the No. 3 seed in the West after finishing with a 57-25 record and are in the top 10 in both offensive and defensive rating. They've missed a significant part of their team for much of the year in J.J. Redick an Chris Paul himself missed 19 games. 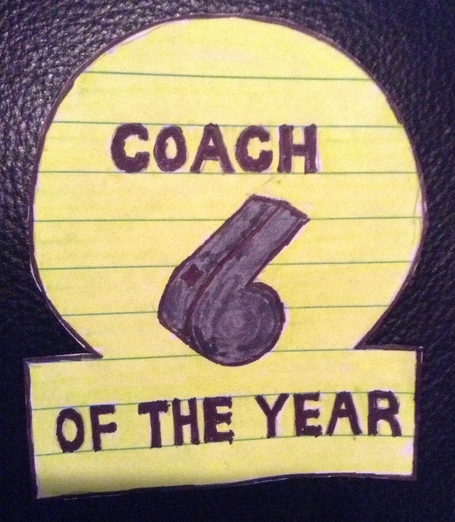 Executive of the Year

Clifford has done a great job with the Bobcats, but Higgins was the one who hired him in the first place. Clifford is also the one who signed Al Jefferson, who has had a monster year and nearly put up 22 and 11 per game. Clifford has also done a solid job of acquiring cheap role players such as Gary Neal, Josh McRoberts, Anthony Tolliver and Chris Douglas-Roberts who have played well. All of these moves have turned the Bobcats into a playoff team, no small feat when you take into account the organizations history and where it's been the last few years.

First and foremost, Ryan McDonough hit a home run by hiring Jeff Hornacek. Second, let's take a look at the net result of what McDonough has done so far. Since taking the job, McDonough has acquired Eric Bledsoe, Gerald Green, Miles Plumlee, Ish Smith, the 2013 18th pick and the 2013 27th pick. In exchange, he has given up Jared Dudley, Marcin Gortat, Luis Scola, Kendall Marshall, Shannon Brown and Malcolm Lee. I'm calling that a big win for McDonough. The Suns have a deep roster with plenty of assets, yet McDonough has maintained cap flexibility while pulling all of this off.

The Blazers had one of the better starting fives in the league a year ago, yet they also had one of the worst benches I've ever seen. This year, Olshey rounded out the starting five by adding Robin Lopez and overhauled the bench by acquiring Mo Williams, Thomas Robinson and Dorell Wright and drafting C.J. McCollum. The result is 54 wins and the fourth seed in the West.

Finally, Masai Ujiri - the reigning executive of the year - moved to Toronto after they threw giant bags of cash at him, and he has continued to be a good GM. He ditched Andrea Bargnani, got rid of Rudy Gay and kept Kyle Lowry. As a result, the Raptors finished with the third best record in the East. 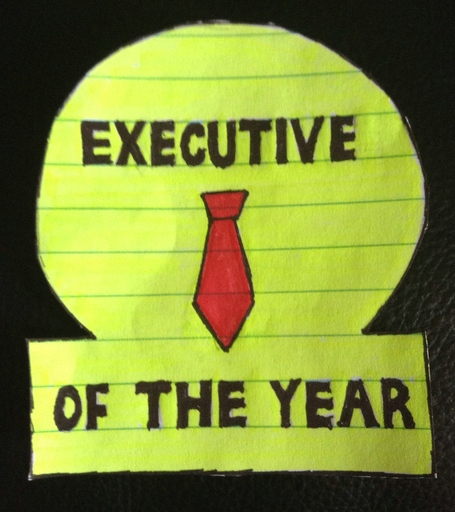 DeMarcus Cousins has always been an enigmatic talent. He put up numbers in his first few years, but they weren't all that efficient or impactful, despite the talent he clearly possessed. Then the Kings extended him, and many were wondering how he'd respond after getting his contract. Turns out, he elevated his game and cut out a bit of the nonsense. He's had a monster year, putting up 23 and 12 while improving his shooting percentage to almost 50 percent.

Goran Dragic made that very difficult leap from solid starting player to a true star in his sixth season in the NBA. He put up a solid 15 and 7 line amid the turmoil that was the 2012-13 Suns season and showed flashes of how good he could be; however, the consistency was lacking. This year, his points shot up to 20 as his shooting percentages went up across the board. He turned himself into a lethal scorer, shooting 40 percent from 3-point range and 54 percent inside the arc. He is one of the best transition players in the league, and his step-back/pull-up jumper has approached automatic status. Dragic was the driving force behind the Suns surprise season.

Gerald Green is another big reason the Suns have done so well. His career has been all over the place, bouncing between the NBA, the D-League and overseas leagues. He cracked back into the Association with a strong 31 games for New Jersey in 2012, signed with Indiana then promptly turned back into the old Gerald. He averaged 7.0 points on 37 percent shooting and only appeared in 61 games. The Suns acquired him as part of the Luis Scola deal, and he has been reborn under Jeff Hornacek. Green is still taking a lot of the same crazy shot he has been his whole career, only they are going in now. He averaged 16 points on 45 percent shooting and 40 percent from deep.

Markieff Morris' career got off to a great start, but took a nosedive after the All-Star break of his rookie year. He was awful for a year-and-a-half following the break. He was a power forward who shot 40 percent from the field. Forty. His offensive ratings were 97 and 96. And it's not like he was a great rebounder or defender either to make up for his offensive ineptitude. He completely turned it around under Hornacek, however, putting up a solid 14 points and six rebounds in 27 minutes per game off the bench. His shooting percentage shot up to 49 percent, he improved to almost 80 percent from the charity stripe and his offensive rating climbed to a very good 111. That's a 15-point bump in points per 100 possessions. That's huge.

Lance Stephenson has been a bit of a media darling, getting plenty of attention for the season he has had. He was hailed as one of the biggest All-Star snubs and is now being thrown around in many MIP discussions. His numbers are up across the board, as is his playing time and usage rate. His rebounding and distributing are up significantly. However, oddly enough, his offensive and defensive ratings are identical from the previous year and his win shares per 48 is only slightly up. Stephensn played a much bigger role this year, but he improved much more from his second to his third season. 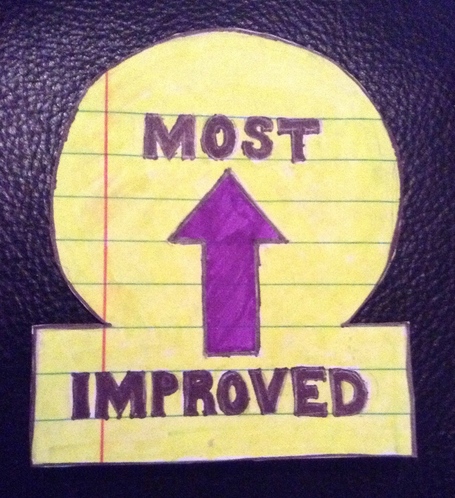 Sixth Man of the Year

Jamal Crawford won the award a few years back while he was with the Atlanta Hawks, but he made his case for a second award this season. He averaged almost 19 points in 30 minutes per game, the best per-minute scoring season of his career. He's only shooting 41 percent from the field and 36 percent from deep, however. He's also started 24 games and the 30 minutes he plays is the most of anybody on the list.

Taj Gibson has had the best season of his career for Chicago and has stepped up offensively with Derrick Rose out of commission. His numbers are very similar to Morris' at 13 and 7, and he's a terrific defensive player. He's a big reason Chicago was able to survive after Luol Deng was traded away.

I've already talked about Morris above. He's been terrific for Phoenix, and his new-found consistency has been key to the team's success. He was the only player on the team that provided interior scoring, and his ability to knock down jumpers as well helped space the floor. There were several stretches where he acted as the go-to scorer for Phoenix this season, and was even named Western Conference Player of the Week early in the season. 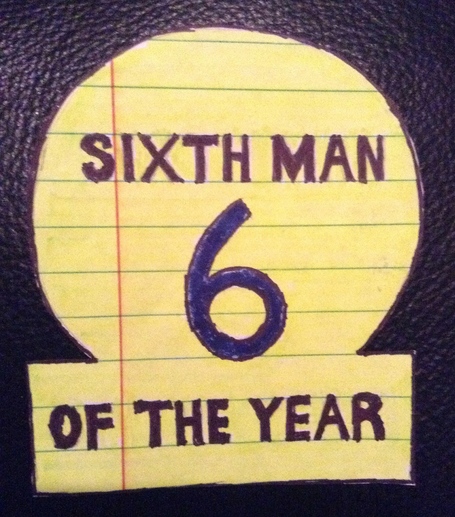 Defensive Player of the Year

Bah, nobody cares about defense anyway. Nobody wins.

As much as I'd like to give this to a Sun - and Goran Dragic's name belongs in the conversation for voters' ballots - Kevin Durant is the only answer here. He has had a phenomenal season. He put up 32 points, 7.4 rebounds and 5.5 assists per game, and he nearly did it on 50-40-90 shooting. His running mate Russell Westbrook missed 36 games, yet Durant dominated and the Thunder won with or without their starting point guard.

Other names that belong on the ballot: LeBron James, Joakim Noah, Blake Griffin,

(He's not a Sun so he can make his own award)

There you have it. My completely unbiased picks for the end of season NBA awards. While the Suns won't win every award, it is a testament to the season they had that the team has legitimate candidates for each of them.