P.J. Tucker was already a valuable player due to his defense and rebounding, but his improvement as a shooter allowed him to take a big step forward this season.

P.J. Tucker was one of the very few bright spots from the 2012-13 season. He went from out of the league to a summer league invite to a roster spot and eventually a starting role. He won over fans, teammates and coaches alike with his heart and hustle.

Tucker was very good in his role as a defender, rebounder and all-around hustle guy. However, at 28 years old with limited offensive skill and physical upside, there did not appear to be much room for improvement for the journeyman. Fortunately for the Suns, nobody told Tucker that.

Tucker returned to Las Vegas for another run with the Summer Suns, and nearly led them to a championship. He provided value to the team as he was, but to play a bigger role he knew he had to become more of a threat offensively. So he determined to turn himself into a shooter.

He locked himself in a gym and came back this season with a new weapon: the corner 3-pointer.

Last year, Tucker took just 70 3-pointers and shot 31.4 percent. This season, he MADE 74 and shot them at a 38.7 percent clip. Tucker nearly tripled his attempts and quadrupled his makes from deep. Adding this one tool to his arsenal opened up the rest of his game and allowed him to be a much more effective player overall.

Tucker started 81 games and was second on the team in minutes, and his scoring and rebounding numbers spiked. Tucker's newfound ability to space the floor and make teams pay for leaving him open allowed Jeff Hornacek to play him more minutes and it paid off or the Suns. 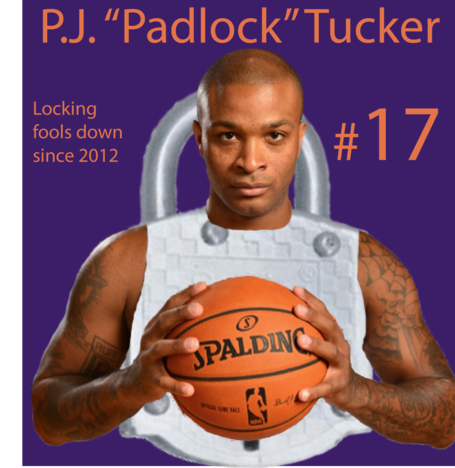 Excluding shots around the rim, the area where Tucker took most of his shots is the right corner. He shot 93 of them and made 33 for a fairly average percentage of 35.5. From the left wing, he only took 73 but his percentage spiked to nearly 50 percent. He was just 6-23 on above-the-break threes.

Unfortunately, Tucker's smart shot selection and knowledge of his own limitations did not extend inside the arc. Tucker's 2-point percentage dropped from 50.3 to 45.0. He shot just 50 percent in transition and 37.5 percent on offensive rebound plays. Tucker is a strong player in the open court and a beast on the offensive glass, but he is still just 6-foot-5 and has trouble finishing against the length one finds around the basket in the NBA. He can definitely get tunnel vision, but considering how hard he plays every second he is on the court, that's a trade-off I think the Suns are willing to make.

Despite his limitations, Tucker's improvement as a shooter means he is no longer an offensive liability. And that's all you're looking for, considering his best asset is his defense and rebounding.

Tucker really is one of the best inch-for-inch rebounders in the entire league. The only player 6-foot-6 or under with a higher rebound percentage than Tucker is Chuck Hayes, who is basically a midget center. The only other two perimeter players in double digits percentage-wise are Lance Stephenson and Russell Westbrook. Tucker is as strong a player as you'll find an he has long arms, great hands and terrific instincts. Toss in his high-intensity motor, and it's no surprise he's such a good rebounder.

Defense is how he made the Suns in the first place, and as his offensive game has improved he hasn't allowed his defense to slip one bit. Tucker was asked to guard the opposing team's best player every night, and not once did he ever back down. He isn't the quickest or most athletic of wings, but his strong, physical style of play and relentless effort allow him to make even the best of scorers work for every shot they get.

Tucker's tendency to get up in opponents's shirts and never leave earned him the nickname "Padlock" from Bright Siders.

Individually, Tucker locks down opponents as well as anyone. Per Synergy, opponents shot 32.3 percent against him in isolation, 35.2 percent as a pick-and-roll ball-handler and 29.3 percent off hand-offs. In comparison, Andre Iguodala - widely considered one of the very best perimeter defenders in the NBA - held opponents to 37.7 percent, 40.8 percent and  43.9 percent on those three play types. Iguodala forced more turnovers, but overall Tucker's results (on a much weaker defensive team) are very comparable.

In summary, Tucker is second on the Suns in minutes played and rebounds, third in 3-point percentage and win shares and the best perimeter defender on the team. And he did all of that for less than $1 million this season, making him the most underpaid player in the league according to Forbes.

Tucker gets a slight downgrade for his transition adventures and struggles to finish among the tress, but taking everything into consideration he maximized his ability and played a huge part in the Suns' surprisingly successful season.