While one highly notable NBA mess is getting rightfully cleaned up, another blight is still left unchecked. The worst officiated professional sport reared its ugly head again as referees butchered a replay and altered the outcome of a playoff game.

Share All sharing options for: Officiating: Another black eye for the NBA - Botched replay costs Thunder game against Grizzlies

Or is it even that much of a well-kept secret? Seemingly every NBA fan I know carries a chip on his shoulder to varying degrees over the way the games are officiated.

I seriously think that many people have developed a psychosis where they think that the referees are out to get them their team. But maybe, through their egregious incompetence, the refs actually are.

The first round series between the Oklahoma City Thunder and Memphis Grizzlies has to be one of the more entertaining matchups in playoff history. Last night's game just set an NBA record by going into overtime for the fourth straight time in the series. Four straight overtime games between two teams.

These games are a grind and have been decided by the slimmest of margins.

After game five the Oklahoma City Thunder find themselves down three games to two after a heartbreaking loss in overtime at home. After a Kevin Durant heave from well behind the three point line bounced off the rim into the waiting hands of Serge Ibaka, Ibaka's last second fling went in just after the red lights lit up on the backboard.

As the announcer on NBATV said, it was an "eyelash" too late.

I knew before the Thunder inbounded the ball for their last possession that the game clock was wrong.  They just showed multiple replays of the previous possession where Zach Randolph was the last player to touch a ball that went out of bounds. NBATV went forward and backward through the play with the clock running in the bottom right corner of the screen so anyone sitting at home could see who touched the ball last and how much time was on the clock.

The referees reviewed the play and reset the clock to the wrong time. In game five of a tightly contested playoff series they managed to put the wrong time on the clock before the last play of the game... Because of course two tenths of a second could never be important in that type of situation.

Their replay process led them to be two tenths of a second off. Let me illustrate how absurd that is.

I took the following pictures with my phone by freezing the replay that NBATV showed while the referees were deliberating. Using my DVR and smartphone I achieved a greater degree of accuracy than the referees could with the "technology" they are using for replay.

Forgive the quality of the shots. Hilariously enough, however, they are crystal clear in their ability to illustrate the correct time that should have been put on the clock. Just imagine that these murky, milky shots are how the game looks through the eyes of the referees... 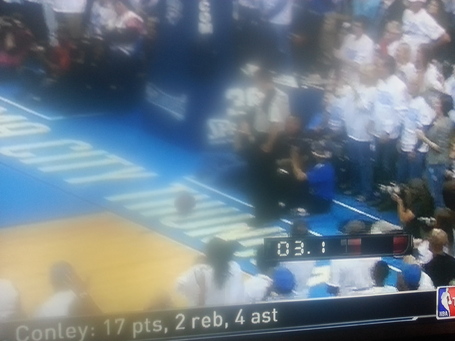 This is before the ball bounces. Notice how it is blocking the middle of the H and is above the left side of the U. 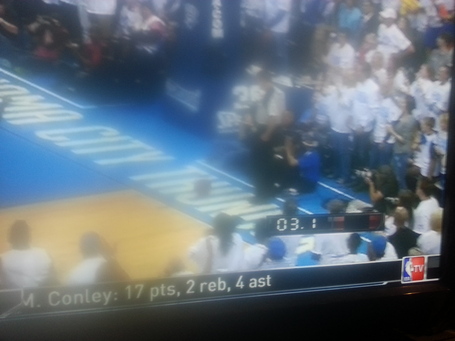 Here is where the ball bounces. This is where the clock should have stopped. Notice how the ball has moved down so that it is completely covering the left side of the U and has moved to the right of the middle of the H. 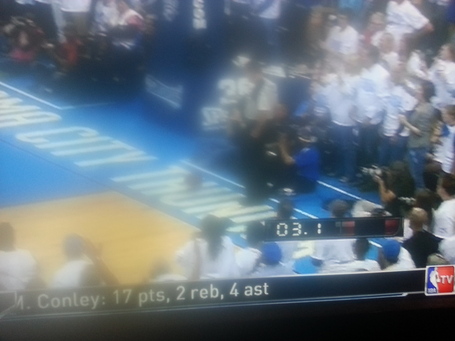 Here's the final shot. The ball has now moved back towards the H and completely off of the U.  Its path has been shown to move from the left to the right and down, then back up.  It has clearly bounced. 100% clear. There is still 3.1 left on the game clock.

I actually considered researching better still frames, but in the end my tv selfies seemed like a great way to toss salvos at the insane inaccuracy of the 2.9 second ruling.

It's pretty interesting that they were able to use the replay technology to conclusively rule Ibaka's shot was too late, but they couldn't get the clock right on the review exactly before that play. Based on the track record from that call, maybe they didn't even review the video of Serge's fling and just flipped a coin to decide the victor.

After the game I ran this error by a few people for feedback. Some were upset about the end of the game. That Ibaka was fouled on that last shot... That Randolph was over the back on the previous possession... That replay should be expanded so that corrections could be made in obvious circumstances.

That Joey Crawford inexplicably ran towards Durant like a crazy man and took the ball from him before he took (and missed) his second free throw that would have tied the game. Oddly enough, it was because he noticed an inconsistency with the team fouls on the scoreboard. How ironic is that?

This week the NBA finally stepped up and did the right thing by taking care of a problem (Sterling) that had gone on far too long.

My advice to Adam Silver would be to maintain that positive momentum and take care of another problem (officiating) that has gone on far too long. He could start by making sure the referees put the correct time on the clock before the final plays in playoff games... 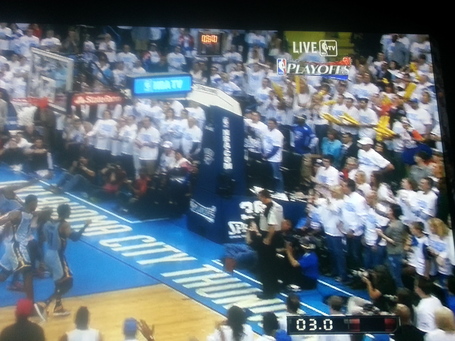 An issue was raised as to whether the clock superimposed on the bottom right hand of the screen matched the actual game clock. Here is a picture that shows the official game clock at 3.0 seconds well after the ball has bounced.