On a team with the least playoff experience, by far, among of the Western Conference hopefuls, P.J. Tucker knows he has to bring his toughness and heart every night for the Suns to qualify for the playoffs.

The Phoenix Suns have exceeded expectations this season and with six games left they are locked in a mortal battle for their playoff lives with Dallas and Memphis for those last two playoff spots.

Among the three teams, the Suns have by far the least playoff experience and the toughest remaining schedule. Collectively, they don't yet know just how hard it is to make the playoffs and win once you get there. Twice in the past three weeks, the Suns have fallen to a much lesser opponent (Cleveland Cavaliers, Los Angeles Lakers).

Even in this playoff push where the Suns have won 9 of their last 12 games, they can shake their heads in dismay at all three of those losses as signs of an experienced team giving away a win. Especially the last two.

"That was probably one of their worst games of their year," coach Hornacek said of the lack of effort shown against the Lakers last Sunday night. "They got a little confident winning those six games in a row and they thought they were just going to show up and beat [LA] and it doesn't work that way."

Then on Wednesday night, the Suns grabbed a 17-point lead late in the third quarter but allowed the Clippers - 3rd seed in the West - to rip off a 38-17 closing run to end the game and drop the Suns to 9th in the standings. The run began with a Clippers second unit that went on a 10-0 run to cut the deficit and allow Doc Rivers to bring back his starters to close out the game.

"It’s like a broken record," Hornacek said. "We tell them all the time, we can’t have a two to three minute lull against these top teams.”

That's inexperience. Maybe the Suns learned their lesson. On Friday night, they flipped the script against 5th-place Portland, ending the game on a 52-22 run.

While Tucker wasn't a big part of the game-ending run, his presence all season long has helped put the Suns 14 games over .500. Hornacek played three point guards a lot, and Gerald Green got hot for 32 points.

But they will need Tucker again if they're going to finish ahead of either Dallas or Memphis. None of these Suns has been been a starter on an NBA playoff team. But Tucker has twice been a league MVP and led his team to championships overseas. Most recently, Tucker led Brose Baskets (Germany) to their league title in 2012, just before joining the Suns for their summer league.

"I was the big offseason acquisition," he told me at practice earlier this season. "We had expectations there to win the championship. I was the focus of the team, but at the same time I did all those little things to help win more games than we would have."

Since returning to the NBA, P.J. Tucker has found a way to earn his coach's trust three times over. Alvin Gentry, Lindsey Hunter and now Jeff Hornacek - all with different expectations on them - have turned to Tucker to give him big minutes. Tucker is second on the team in minutes played this season (would be third, but for Bledsoe's injury) and never seems to run out of energy. The same cannot be said for the other guys on the team.

Hornacek lamented his inability to leave his best players on the court for 40 minutes a night like other teams can.

"They’re not able to play the 40 minutes like some of these other guys," Hornacek said after the Clipper loss, of regressing to one-on-one play when they get tired. "But it looked like Chris Paul had all the energy in the world at the end of the game. Maybe that’s our fault for not getting them in better shape.”

For his part, Tucker just wants to win games any way he can. He's not the most talented, or physically gifted, or tallest player on the court. But he's got heart.

"We just need to win games," he said after losing to Cleveland. "We need to win."

*Basketball-reference.com does not filter for small forwards, so I defined it as players 6'5" - 6-8" who have taken at least 150 three-pointers this season (2 per game). The results are still dirty, because you have to ignore guys like Paul Millsap and Thad Young who normally play other positions. And, they don't include SFs who are taller, like some kid named Kevin Durant. But still, it's a frame of reference.

Just watching Tucker makes it clear how he is the best rebounder in the league under 6'6". While other players are inconsistent with their effort and arm extension in traffic, Tucker gets both arms outstretched to their maximum length and grabs that ball with authority even with other players draped all over him.

The team as a whole has improved one of their worst areas on defense, despite their leading rebounder (Plumlee) seeing a drop from 28 minutes per game in December to 20 minutes per game since the break.

As a team, the Suns remain middle of the pack defensively since the break, even with that horrible stretch at the end of February of allowing 50%+ shooting several games in a row.

Of course, rebounding is not the only way to quantify the value of a small forward. In a Suns offense designed to attack the defense with penetrating guards who kick out to three-point shooters, the small forward must possess the following qualities:

Tucker has turned himself into a very good corner three-point shooter this season. 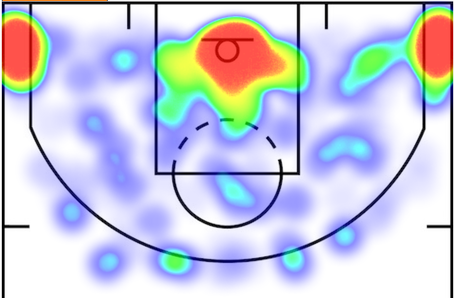 He knows where he can be effective and he stays there. Yes, we've seen him take too many interior shots, forgetting that he's only 6'5", but Tucker knows how to convert more than a player of his size should be able to convert.

Best of all, Tucker gets better at finishing his shots in the fourth quarter than in any other quarter. He's a money-time player.

Of course, the Suns could do better. They could have a guy who is a bigger part of the offense. Tucker is 74th on that b-ref list in offensive usage rate among "small forwards". He can't pass well, and whenever he dribbles the ball it's an adventure.

Carmelo Anthony is clearly the best of this mold of player, but he makes north of $20 million a year.

Take a look at the list of small forwards out there on the link. Among the good rebounding SFs who make a high percentage of their three-pointers and can defend the other team's best big wing player, you see names like Carmelo Anthony, Kawhi Leonard, Lance Stephenson, LeBron James, Nicolas Batum and Paul George.

The other guys on the list fit the mold but come up short in one or more areas: Mike Scott doesn't make many threes. Neither does Thaddeus Young. Mirza Teletovic, Jordan Hamilton and Dorrell Wright can't defend as well as P.J.

Trevor Ariza is probably the best example of a better version of Tucker, and he made $7.7 million this season.

If you look hard enough, you'll see offseason darling Gordon Hayward way down this list. He is 25th in total rebound percentage (30% less than Tucker) and makes only 31% of his three pointers.

He passes very well (24.4% assist rate would be third on Suns by wide range) and handles the ball well, and maybe you bank on Hayward's higher three-point % in prior seasons (47%, 35%, 41%) and discount the rebounding issue as a byproduct of playing on a good rebounding team.

Jeff Hornacek was his shooting coach in Utah when Hayward was a good three-point shooter, and we have all seen this season how Hornacek puts every player in position to succeed.

Still, that's a gamble to pay any free agent based on future potential rather than current production.

The Suns best possible target, in terms of talent, productivity and likelihood, would be Indiana Pacers guard Lance Stephenson.

Stephenson, 23, defends very well, rebounds very well, and makes enough threes to keep teams honest. In addition, he passes well (as good as Hayward) and handles well enough to run the offense as a change of pace.

In the Suns offense, he would play small forward just like P.J. Tucker (both are 6'5") in the mold of Dan Majerle back in the late 80s around Hornacek and Kevin Johnson. The Suns offense would improve, and the defense would potentially improve as well.

The downside is that Stephenson is a wildcard who had red flags coming out of college and is seen as someone who fits best on a veteran team with leaders who can keep him on the straight and narrow.

Stephenson is an unrestricted free agent, meaning that the Pacers cannot just match any offer this summer to keep him. But the Pacers can still offer larger raises and one more year (five years vs. four). For a player of Stephenson's age and talent, the fifth year would be an easy decision.

The Suns would have enough salary cap space to make Stephenson an offer of any size (he can make up to nearly $14 million in his first year), but like other teams can only offer four seasons.

In the NBA, talent wins out. Stephenson would make the Suns a very dangerous opponent to any team in the NBA on both ends of the floor.

Back to the present

The Phoenix Suns are in the playoff picture this year in part because of the intensity and effort of P.J. Tucker. On a team whose veteran leaders are quiet (Goran Dragic, Eric Bledsoe, Channing Frye), Tucker has stepped up this season to be the voice of effort and hustle in the locker room and on the floor.

The coach and players all point to Tucker as their vocal leader and their bellwether of effort. He doesn't have the greatest offensive skillset. Rather he maximizes his talent more than most players in the NBA can do.

Seeing how hard he works has helped other players tap further into their own talents.

P.J. Tucker will cash in this summer. The question is whether the Suns will pay him, roll the dice to find a cheap replacement, or pay someone else more money to be an even bigger factor on the team.

But if those other avenues are murky, or the Suns spend their money elsewhere, they can do a lot worse than P.J. Tucker next season at $3-5 million per year.