The Phoenix Suns are already in their playoffs, trying to keep pace in the midst of a grueling schedule. Tonight, they face the 2nd-seeded Oklahoma City Thunder while trying to rise from 9th in the West.

After holding a 17-point lead against the 3rd-seed Clippers before losing on Wednesday, and then rolling over the 5th-seeded Trail Blazers on Friday, the gauntlet continues with hosting the 2nd-seeded Thunder tonight at US Airways Center in downtown Phoenix.

Overall, the Suns have lost 2 of 3 since a 6-game winning streak and now sit at 9th in the Western Conference standings with only 6 games to play. They are tied, but lose the tiebreaker, with Memphis and are half-game behind 7th-seeded Dallas who have a couple of cream puffs on their schedule this week.

The Suns cannot afford to waste an opportunity at home against the Thunder, with only one more home game left on the docket after this (Memphis, to whom the Suns have lost all three previous games) versus road games against two winning teams (Mavericks, Spurs) and two losing teams (Pelicans, Kings).

It's a gauntlet for sure.

The Suns have not helped themselves with egregious losses to the lowly Lakers last week and lowly Cavaliers two weeks before that. But overall, the Suns have won 9 of 12 since Eric Bledsoe re-entered the starting lineup and are 17-0 this season when Bledsoe and Dragic each score 16+ points.

The Opponent - The Thunder

Since losing to Phoenix and the LA Lakers in consecutive games a couple of weeks ago, the Thunder have won 7 of their last 8 games with Russell Westbrook starting at point guard. Westbrook has been resting on the second night of back-to-backs, including their loss to Houston on Friday, so he is well-rested for tonight's game in Phoenix.

When the two teams last played, the Thunder's biggest problem was their inability to stop other teams from scoring. In those last 8 Westbrook games, they have kept their opponents under 100 points 5 times. Progress.

Kevin Durant has now reached 40 consecutive games with scoring 25+ points. One more will set an all-time high in the NBA, eclipsing Michael Jordan. In the past ten games, Durant has poured in 33.7 points a game, with 7.2 rebounds and team-leading 6.0 assists.

Right behind him on assists are the point-guard tandem of Russell Westbrook (5.7) and Reggie Jackson (5.6) over the last 10 games. Westbrook and Jackson are putting up Bledsoe-type numbers recently - both exceeding 15 points, 5 rebounds and 5 assists. Westbrook does it on 26 minutes a game, while Jackson plays 34.

The Thunder have resorted to a ton of small-ball lineups lately. The only big man averaging more than 18 minutes per game in the 10 games has been PF Serge Ibaka. Adams (16), Collison (18) and Thabeet (8) play sparingly.

By comparison, the Suns will look normal-sized. The Thunder's Durant (6'11" shooter) and Ibaka (6'10' shotblocker) are often the tallest in their lineup.

The Suns have to play every game like a play-in game and cannot afford any more letups. But can they actually stay consistent over the last six games, four of which are against teams equal to or better than them?

We've talked often about how the Suns don't have anyone in their lineup who played a major role on a playoff team before. Dragic, Bledsoe and Frye have tasted that pressure, but weren't counted on to deliver as the primary scorer in any of those games.

We won't know if the Suns have "grown up" until it's already happened. Let's hope it happened against Portland on Friday, when they overcame a 10-point deficit to close the game on a 55-22 scoring margin, because we know now that it hadn't happened as of last Sunday's Laker game.

Coach Hornacek has commented periodically this season that (unnamed) players on the team get tired and can't play 40+ minutes of inspired ball like Chris Paul or Kevin Durant can for their teams.

Dragic leads the team with 34.9 minutes per game, which ranks only 33rd in the league. Second in minutes per game is Eric Bledsoe at 32.8, ranking 59th. No other Phoenix Suns player ranks higher than 94th (P.J. Tucker, 30.7).

Those aren't terrible numbers, but it's clear Hornacek feels he has to coach around fatigue and make sure he's rotating in fresh bodies no matter the score. Bledsoe lacked energy against the LA teams, but returned with a vengeance against Portland (career high 30 points, 7 rebounds, 3 assists), while Dragic has flipped his shooting numbers recently (missing most of his field goals attempts, but making most of his free throws).

Ish Smith is the primary backup to Dragic/Bledsoe but has been hot and cold over the past week. He was absolutely embarrassed by Darren Collison on Wednesday night, but helped change the game in the Suns favor on Friday in Portland.

The Suns need all three players to play their best basketball to beat the Thunder. 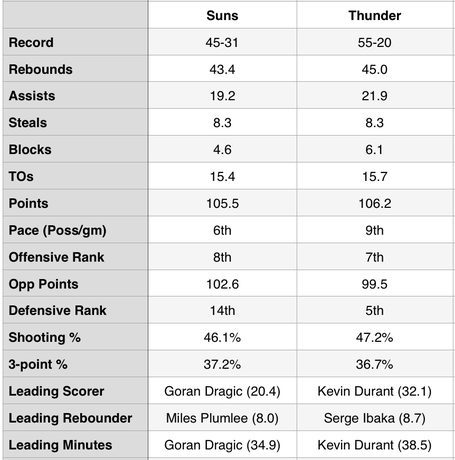 With Sefolosha out, the Thunder first turned to Jeremy Lamb but have since turned to Andre Roberson and Derek Fisher to rotate in around Westbrook, Jackson and Durant. The Thunder don't need a scorer around those players - they need a smart veteran who will defend the other team's medium sized wing player and set up on the weak side for spot-up shots.

Last time these teams played, the Suns won behind the hot hand of Gerald Green (career high 41 points), supplemented by Markieff Morris and Marcus Morris (39, 9 and 5 between them) and point guard Goran Dragic (22, 4).

Eric Bledsoe did not play in that game, and Russell Westbrook was held to 30 minutes despite being a hot, hot shooter (36 points on 13-22 shooting).

Definitely, the matchup to watch is Bledsoe vs. Westbrook. Can the Suns win this matchup tonight? If so, that will go a long way to deciding this game.

You could also go with a matchup of shooters - Durant vs. Green. Last game, Green outscored Durant 41 to 34. But if you're hanging your hat on this happening again, you probably should move your hat.

This does look like a game that will be dominated by small-ball lineups where the Morrii, Green, Dragic and Bledsoe will likely get the lion's share of minutes. You'll see a lot of Thunder lineups with Durant and Ibaka playing the 4/5, with Westbrook, Butler and Jackson/Fisher on the wings.

While it seems obvious that this game will be a high-scoring affair, something tells me it won't approach the 128-122 totals (in regulation!) of the game a couple of weeks ago.

Look for the Suns to play inspired, helter-skelter all night - much like Friday's game in Portland. Sometimes that will work, and sometimes it will look ugly.
But the home crowd should help the Suns rise above the Thunder in this one. Cross your fingers, toes, arms and legs on that, okay?