The Phoenix Suns have been at the Draft Combine for two days now. In that time, they have apparently met with 4 combo guards and no one else.

Miles Plumlee had better watch out. Same for Markieff Morris and Channing Frye. Those guys are just too big to play for the new Phoenix Suns anymore.

The Suns have already moved point guard Goran Dragic to most-of-the-time shooting guard, and Dragic responded with a season only league MVPs have produced in the past twenty seasons: 20+ ppg, 5+ apg, 50+% shooting, 40+% 3-pointers.

At point guard, the Suns have All-Star-to-be Eric Bledsoe, as long as he can stay healthy. In 43 games this season, Bledsoe filled the stat sheet and figures to annually produce 18 points, 6 assists, 5 rebounds and 2 steals per game while vying for the All-NBA defensive team.

With both starting, the Suns were 23-11 this season. So why stop there?

GM Ryan McDonough is a master at picking out undervalued, future star combo guards and point guards. He is responsible for Rajon Rondo and Avery Bradley in Boston. Last year, he drafted high-ceiling Archie Goodwin and traded for Bledsoe in Phoenix.

This year, he's spent every waking minute at the NBA Draft Combine apparently talking to no one but point guards and combo guards. 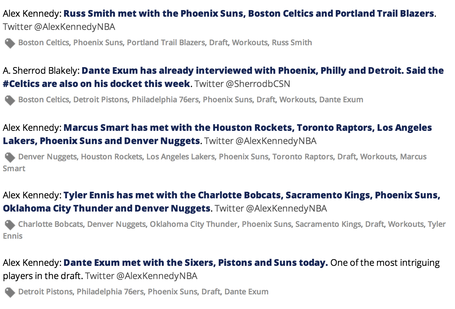 Who needs Adreian Payne or Markieff Morris or Channing Frye when you can play the 6'6" Exum as a combo PF/C?

Why bring back P.J. Tucker when you can play the 6'4" Marcus Smart at the combo SF/PF spot?

Nay, the Suns are trying to build an army of point guards.

There you have it, Suns fans. Goodwin can swing to just about any position. Avery Bradley is a free agent waiting for a big offer, so McD could bring him to Phoenix to play combo minutes in the back court. PG Shaun Livingston (6'7") is a free agent who can fill the "big man" void and give Smart and Exum a breather.

Pray for that lotto ball to give the Suns a top-3 pick, and then hope McD can swing all the big guys on the Suns roster for another top-10 pick or two.