Alex Len comes from what was maybe the worst draft in a decade. When Mason Plumlee, he of 7.4 and 4.4 rebounds per game, is a finalist for Rookie of the Year, it was a bad year for rookies.

While fellow rookie Archie Goodwin ran up the score on Sacramento with 29 points in the season finale, 7-1 center Alex Len had a much worse final game: 0 points, 4 rebounds in 12 minutes. This from the #5 overall pick in the 2013 NBA Draft.

I mean, if you're the 5th overall pick in the Draft and you're taller than 95% of the players in the league, you ought to be able to dominate. Or, at the very least, score a few points against a team missing their best center, DeMarcus Cousins, right?

But hey, at least he gave Nick Young his favorite moment of the season.

Len finished with the worst PER on the team at 7.2, indicating that the average NBA player was twice as valuable as him this season (league average = 15.0 PER). Len made only 42.3% of his shots, nearly all of them within a couple feet of the basket. 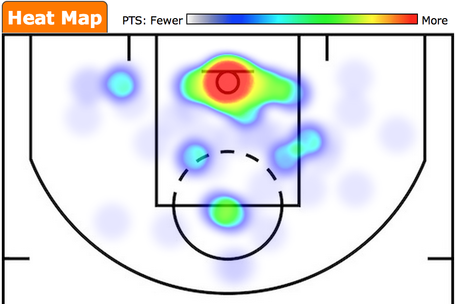 Len did have a late start on the season due to the foot injury (stress fracture requiring surgery) in college, and only played 42 games. When he did return to the lineup, the Suns were in a playoff chase that went down to the very last game of the season, so a rawrawraw 20-year old rookie center was not going to get much time off the pine.

Still, he did what he could on the practice court and between games to show the coach he was ready.

"From the time he came in, after his ankle issues," coach Jeff Hornacek said of Len. "He did a great job of working hard."

A closer look at Len's shot chart shows he was fairly effective as long as he stayed right at the basket. 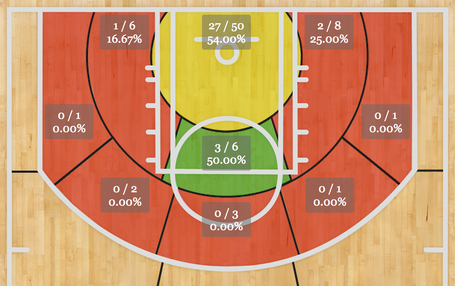 Len was slightly below league average on shots at the rim, which is saying a lot for a rookie. Remember how Markieff Morris and even Goran Dragic were terrible at scoring at the rim as rookies but got a lot better in after two seasons.

"Both guys have a good feel for the game," Hornacek said of Len and fellow rookie Goodwin. "They will figure out the speed of the game. Those guys are two of the hardest working guys on the team. They are in there in practice every day, they’re in the weight room, they stay after."

But I won't take any more time sugarcoating Len's rookie season. It was bad. Real bad.

"It was frustrating," Len said of injuries impacting so much of the season. "But it is what it is. I'm looking forward, I don't look back."

The good news is that it's over.

This summer will be a big one for Alex Len. He certainly can't get any worse. Let's see him go to Summer League with a lot more rope, minutes and opportunity to succeed.

"I’ve always felt that the offseason between your first and second year is the biggest summer of your career," GM Ryan McDonough said of the rookies. "We knew we drafted two of the younger guys in last year’s draft and it was going to take time. You saw flashes of potential this year. Summer league will be big for them. It’s a big summer for those guys."

Len said he will stay in Phoenix this summer.

"It's going to be a huge summer," Len said in his exit interview. "Getting healthy, getting stronger, getting better. I'm going to stay here this summer."

"I just need to play a lot, I'm going to try to play as many pickup games as I can," he continued.

I could discuss his pros and cons, but all you need to do is look at his scouting report from college. It's all still true and all still relevant. In case you've forgotten, here it is.

Alex Len can get a lot better this summer. We didn't see that Alex Len this year - the one on the video from Maryland (at least, in the strengths section!). That Len was much more mobile than the one we watched in Phoenix. And most of that video was WITH playing with that stress fracture before he was shut down for surgery.

"The game was too fast for me this year," he said. "For me, the game just needs to slow down."

He's going to turn just 21 this summer and it generally takes big men longer to develop than little men, especially when recovering from injury. He's lifting weights and getting his mobility back as the ankles recover.

He has the benefit of offseason coaching from the staff that brought you Miles Plumlee, who'd logged only 55 minutes as a rookie for a team in a playoff chase. Len got 362 minutes, so there's a big plus.

He has the benefit of a coach who put every single Suns rotation player in a position to succeed this past year - he played to their strengths and hid their weaknesses. Hornacek can do that for Len too.

Len just needs to stay healthy, gain 20-30 pounds and mature into his NBA skill set. All that takes time and patience.

But once Summer League starts, the clock begins to tick.

One thing ESPN Insider/NBA scout Amin Elhassan said since day one, and repeated even before the preseason scrimmage in Flagstaff last September, is that Alex Len is not a natural fit in the Suns offense.

Len is more of a lumbering guy than gazelle. And in the Suns offense, he will always look slow by comparison. This is no Amare Stoudemire, though a Maryland blogger suggested as much last summer.

But he is really long, and really talented. Maybe he'll be a taller, slow-motion Amare who can dive to the basket and finish? Maybe.

More likely, he's more a Marc Gasol type with a good midrange range and eventually a good postup game. Except that Hornacek said guys hanging around the 15-foot mark clog the lane too much. He already moved the Morrii out of there.

So Len will likely be a close-to-the-basket guy who CAN step out, but spends most of his time near the hoop.

Does that fit the Suns offense and defensive schemes? I hope so.

Depending on your mood today, you're either thinking I'm dumping too much on Alex, or that I'm being realistic. I mean this article to be realistic.

Alex did not have a good season. He showed flashes of potential, and in a handful of games he made his mark. But he really is unpolished, and he needs to stay healthy for a while to break out of his shell.

I'm really hoping my post-Summer League score is an A, though.