The NBA Draft Lottery takes place tonight, and the Suns are gambling for more than just one lottery pick. Here's a break down of the odds and what the Suns have at stake.

Tonight, the Phoenix Suns find themselves in relatively familiar territory, unfortunately; vying for a chance at a top three pick with the odds stacked against them.

The Suns are slotted at the 14th and final lottery slot, their third time in the last four years that they have been in the 13th or 14th position heading into the lottery.

So far, they've yet to hit it big...In fact, in the history of the NBA Draft Lottery there has never been a team pre-slotted as the 14th pick that has ever moved into the top three.  Then again, the NBA lottery has only included a 14th slot since 2004...before that, there were only 13 lottery teams.  Even so, a 13th slotted team has only moved up once, when the Charlotte Hornets moved up to the third overall pick in 1999.

But there's a first time for everything right?

The way it's set up is that there are 1000 possible combinations of the four ping pong balls numbered 1-14, disregarding the order in which they are picked.  The teams are assigned a number of possible combinations depending on their win-loss record...which determines their pre-slotted position.

Here's a break down of the odds for each position of getting the number one pick overall:

The ping pong balls are then placed back in the process is then repeated for the second and third picks, and the odds are readjusted accordingly. 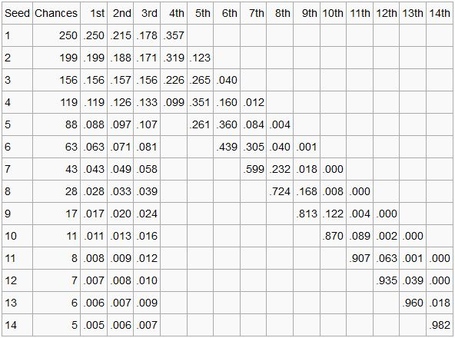 So you're telling me there's a chance...

Although the Suns have only a 1.8% chance of landing a top three pick, which has never been done, this would certainly be the time to do it.

Not only is this draft absolutely loaded with elite talent, the Suns are actually gambling on a two-for-one win.  If the Suns somehow manage to make history by being the first team to ever move into the top three from the 14th position, they also push the Minnesota Timberwolves back from the 13th pick to the 14th.

If the Timberwolves end up picking 14th, then that pick is conveyed to the Suns, per the conditions of the trade that sent Wesley Johnson to Phoenix in 2012.

So not only are the Suns hoping to land a top three pick, they are hoping for an additional lottery pick from Minnesota as well.

In other words, this is the time to break out your voodoo dolls, good luck socks, prayer beads, lucky underwear, etc...The Suns need this one!