Are Goran Dragic and Eric Bledsoe expendable in the Suns' search for a superstar?

The Suns unexpectedly assembled one of the most dynamic, explosive backcourts in the league last season, but is it the linchpin to a future title run or just a means to an end?

Share All sharing options for: Are Goran Dragic and Eric Bledsoe expendable in the Suns' search for a superstar?

All of the hullabaloo surrounding Kevin Love's announcement that he would opt out of his contract in the summer of 2015 resonated with me on several levels. First, I've been a proponent of him becoming a Sun since the first hint of him becoming available at some point. Second, I have no doubts that the asking price will be high and the Suns still might struggle to put together a competitive package despite their recent sorcery in terms of asset collection.

While the Suns have completely unproven nice young pieces in the form of Alex Len, Archie Goodwin and multiple midrange first round picks, front offices around the league aren't slavering over them. Likewise, nobody is eyeing the likes of Markieff Morris and Gerald Green with cupidity as key components in a deal for a superstar. Those are nice embellishments, but it just doesn't seem like any combination of those assets could be the crux of a blockbuster trade.

While McStiltskin may very well leave me nonplussed by spinning the straw of his trade assets into superstar gold, it would seem that Eric Bledsoe and Goran Dragic have to be in the conversation if the right deal presents itself. Not only that, but people should be resigned to the fact that one of them will be included in such a deal.

That shouldn't necessarily shock anyone since last season was a rebuilding process. It was never intended to be close to a finished product. Sure, keeping Dragic and Bledsoe together while adding another piece better than either of them would be outstanding, but is it really feasible? After all, neither is the piece to build around, but an excellent adjunct to put around that piece.

And while it would be great to keep them together is it really even necessary?

Or even great, for that matter?

Maybe this was a star-crossed pairing from the outset. Let's take a look at the backcourts from NBA champions since the 1999 CBA.

The Suns proved this past season that their two point guard lineup was more than a gimmick as Phoenix jumped from the dregs of the league to a playoff contender in a deep Western Conference. Injuries played a part in derailing the team's playoff aspirations with the tandem of Dragic and Bledsoe playing together in just 37 games, but even in that limited sample there was plenty of evidence they complemented each other well on the court. The team went 24-13 in those 37 games and it seems reasonable to speculate that more time together might further galvanize the duo.

While it would seem like a boon for the Suns to have two upper echelon starting point guards, this hasn't traditionally led to success. Of the last fourteen championship teams, only Tony Parker (three times) and Chauncey Billups were top flight point guards during their team's title runs. Chauncey Billups is the only point guard on the list that could even be arguably considered the best player on his team, since Parker's championships came earlier in his career when Duncan was undeniably the team's best player.

This list shows that premiere shooting guard play has been much more vital to winning championships, with Dwyane Wade and Kobe Bryant combining to play on eight of the 14 champions.  Throw in Tim Duncan and that number balloons to 11.  Obviously running mates like Shaquille O'Neal and LeBron James made several of these titles possible, but that still feeds into the leitmotif that top five (and especially top one or two) talent is nearly indispensable in winning a championship.

Notice how none of those players listed is a point guard. Why don't we look back a little further... 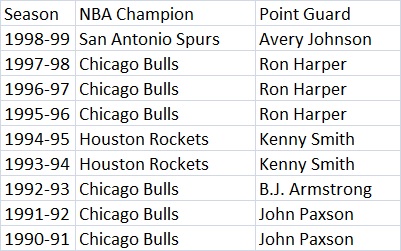 This continues a list of solid, but unspectacular point guard play. In fact, the last premiere point guard prior to Tony Parker or Chauncey Billups to win a championship in his prime was Isiah Thomas on the 1989-90 Detroit Pistons. This would become even more unique if qualified under this criteria - 1989-90 might be the last time that the best player on a championship team was its point guard.

23 years since a point guard has been the best player on a championship team. It's pretty hard to argue otherwise, except possibly in the case of Billups. Point guard just doesn't seem to be that important of a position.

After all, if point guard is such an important position then why can't/couldn't players like Chris Paul, Steve Nash, Deron Williams, Jason Kidd, Allen Iverson, Gary Payton, Tim Hardaway and John Stockton lead teams to championships in their primes?

The best players haven't traditionally been point guards in a long time. 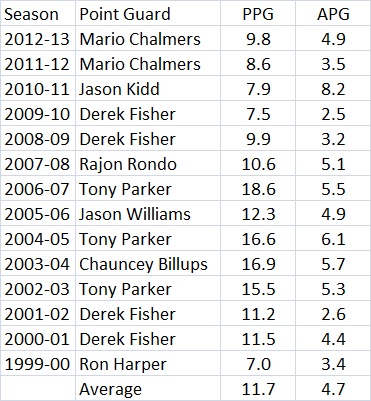 Now let's flip back to the last 14 seasons when teams were playing under the rules of a more current CBA. What does a team need from the point guard position over this period of time?

About 11.7 points and 4.7 assists per game. Hmm... not exactly overwhelming. This is mostly a list of role players that aren't/weren't even great distributors or primary ball handlers. Jason Kidd was in the twilight of his career when he piloted the Mavericks squad and Rajon Rondo was still a 21 year old neophyte when he won in Boston. The Celtics came up just short while Rondo ascended to All-Star status and the veterans aged in later years.

This last piece shows a breakdown of the salaries of the backcourts over the last 14 seasons and their percentages of the team's salary cap. Ten of the 14 point guards made less than 10% of the team's cap number. That would equate to less than ~$6 million under the current cap. Teams just haven't traditionally invested that much money in that position.

While many of these teams paid a large share of their money to their backcourts that was almost exclusively earmarked to Bryant and Wade.

*Although this does show that it is possible for a team to win paying over a third of their cap to their starting backcourt. The Suns will be giving that to Dragic and Bledsoe if they are both on the roster in two years.

I want the Suns to win a championship and I'm confident that is the team's goal. Keeping the pairing of Dragic and Bledsoe may very well be incommensurate with that aspiration.

A team ultimately needs a transcendent talent (and maybe more than one) and point guards just don't seem to fit that bill. I was wrong before in thinking that Goran Dragic would never become an All-Star caliber player, but I'm still not banking on him joining the ranks of LeBron James. Dragic and Bledsoe may very well be great players (still want to see more of Bledsoe), but they aren't the cornerstone.

The Suns best trade assets are Goran Dragic and Eric Bledsoe and should absolutely be in play to bring that type of player to Phoenix.

In fact, the Suns almost succeeded with this strategy before. They traded away part of the  two point guard backcourt the current team has used as a model to demonstrate how the current incarnation can work. Hornacek and KJ were coming off of a season where they averaged a combined 40 points and 16 assists per game, but the organization felt that the team was missing something. Hornacek has even told the story ad nauseum that he felt the team was missing the type of presence that Charles Barkley ultimately brought. Unfortunately, at his expense.

Ultimately, the Suns failed to win by acquiring a bonafide top five talent, but it did lead to the team's second NBA Finals appearance and a truly great time to be a Phoenix Suns' fan.

Now the Suns may have another chance to land an elite power forward. One who can put up 25 and 12 in his sleep, but isn't going to make any All-Defense teams. One who can't seem to put the team that drafted him on his back and propel it to the playoffs.

But whether Ryan McMiracle has his eyes set on Kevin Love or some other player that's not even on my radar that he thinks he can build a championship team around he needs to go after him with an unparalleled zeal.

And he definitely doesn't need the insistence of keeping Dragic and Bledsoe together to get in the way.