Phoenix Suns trade chips not as golden as hoped

The Phoenix Suns were supposed to be entering the 2014 offseason with multiple top-10 picks and an All-Star caliber point guard headlining any trade packages for a star. But what they actually have to offer is a lot less than that.

Share All sharing options for: Phoenix Suns trade chips not as golden as hoped

With the rumors of Kevin Love's availability swirling around it's like winter came early and everyone is desperately plucking their harvest to sell at the market a month earlier than planned.

Unfortunately for second-year GM Ryan McDonough, the Phoenix Suns assets are not yet ripe enough to fetch the highest asking price. 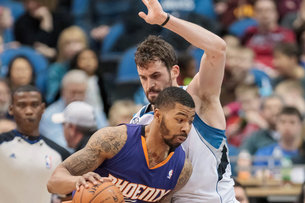 Breakdown of the Suns trade assets

The Suns do have good assets, but those assets lack enough star-power to use as leverage in a trade. Suns assets include two high-upside players under 21, five or six more first round picks in the next two years, a potential pair of All-Stars in Goran Dragic and Eric Bledsoe, and a handful of rotation-quality NBA players on good contracts.

That's a good haul. But not quite good enough, especially if the Suns now want to win big next year. To win big in 2014-15, the Suns will likely need to keep their best two assets - Dragic and Bledsoe - while trading the rest for that third star.

But outside of those two, the Suns trade assets lack any current star power. In the harvesting analogy, the Suns assets are still green. Under-ripe. Only one of those first round picks has a strong chance of being inside the top 10 (Lakers' in 2015).

This wasn't the plan a year ago.

A year ago, the basketball world expected the Suns' bevy of assets to be more top-heavy. We expected the 2014 treasure chest to include several top-10 Suns picks, more seasoning from the under-21 rookies Alex Len and Archie Goodwin and a conundrum at point guard that begged of a break up.

A year ago, Dragic and Bledsoe were supposed to audition for the "future Suns point guard" position, with the loser being shipped off in a trade for a star at another needed position.

A year ago, the Suns were supposed to lose a ton of games to have that top-10 pick in their back pocket.

A year ago, McDonough hinted that the selection of Alex Len was partially because a look at the 2014 Draft - while star-heavy - lacked many Center prospects. Joel Embiid was not seen as a Top-5 pick yet, and even a year later there are no other sure-fire lottery talented centers. Len was supposed to be good trade bait as a high-end center prospect.

A year ago, McDonough said that Archie Goodwin was talented enough to rank in the lottery of the 2014 Draft if he'd stayed in school and had a good rotation situation with Kentucky. Goodwin showed that talent in Summer League, leading the 7-1 Summer Suns in points.

But a year later, the Suns' top-end assets have diminished.

They knocked their own picks out of the top 10 by winning too much. And, they had little no chance to develop Len and Goodwin as planned.

Now the cherry on top is the Lakers' 2015 pick, which is only Top-5 protected for three seasons and then unprotected thereafter. No one knows what the Lakers will do next year, but they did re-sign Kobe Bryant to a two-year extension so the expectation is they will try to win. Maybe that fails, and they end up with a primo (but not top-5 pick). But maybe the Lakers string a few wins together and knock THAT pick out of the top as well.

In addition, what was supposed to be 6 first-round picks in 2014 and 2015 is now likely only 5, with the Timberwolves about to embark on more losing (after trading Love) and thus likely turning their protected first-round pick into a pair of second-rounders in 2017 and 2018.

What was supposed to be six first-round picks with three of them in the Top 10 may now be five first round picks, none better than 14.

What was supposed to be six first-round picks with three of them in the Top 10 may now be five first round picks, none better than 14.

Complicating matters further is that their ready-now trade asset - Goran Dragic or Eric Bledsoe, whoever lost the PG battle - may not even be on the table any more. The Slash Brothers proved to be lethal together, compiling a 23-11 record when starting alongside each other in a slashing, scoring and defending back court that shows promise for years to come.

These developments add up to a big kick in the gut to the Suns' hopes of trading for a coveted player like Kevin Love.

Armed with up to $20 million in cap space (including cap holds on Bledsoe and Tucker, but before they re-sign) the Suns will likely have to hope they can entice a free agent to come to Phoenix instead of trading for Love.

Chris Bosh could opt out. He probably won't, but he could. So could LeBron James, for that matter.

Also out there are small forwards Luol Deng and Trevor Ariza and restricted free agent Gordon Hayward who could all improve the Suns chances of making the playoffs in 2014-15.

But if you're looking for Love, you've just got to hope that good is good enough.