After years of proving himself as an assistant on the sideline, Phoenix Suns' Mike Longabardi is one step away from taking over an NBA team as their new head coach.

The Phoenix Suns turnaround last season was credited to rookie head coach Jeff Hornacek and rookie GM Ryan McDonough. Any mention of the work of assistant coaches toward the Suns' success was offered unprompted from Hornacek himself.

Assistant coach and defensive coordinator Mike Longabardi is one person who should get a lot more credit for the Suns' success last season.

Gortat spent three years with the Suns after leaving Orlando, often commenting about the lack of discipline on defense the Suns exhibited during his tenure. He was treated to a single training camp with Longabardi as the defensive coordinator before being shipped to Washington before the season started.

The Suns shot out of the gate with nearly a month of top-10 NBA defense, as astounding feat considering that nearly the entire roster was new to the team and none of them had used this system before.

"The Suns have really shined on the other side, where they're fifth in points allowed per possession [through mid-November, 2013]. Mike Longabardi, an assistant coach who worked under Tom Thibodeau in Boston, has Phoenix playing a standard Thibodeau system with shocking success. Everyone is following the rules, Bledsoe is a freaking menace, and opponents are shooting only about 40 percent on close-range shots when Channing Frye, Morris, or Miles Plumlee is near the rim, per SportVU. That's not quite Roy Hibbert-level intimidation, but Tyson Chandler-level work is a giant surprise for this frisky bunch."

Sadly, it was at this point people stopped talking about the Suns defense, instead focusing on the players (Dragic, Bledsoe), the offense and the rookie coach.

But while the Suns didn't quite maintain that top-5 defense, they did finish the season in the top half of the league for the first time since the mid-2000s.

Last fall, Bright Side got an exclusive interview with Mike. And just like our interview with Hornacek, a look back at the Longabardi interview shows that he followed through with everything he said he would do, and then some.

"Teaching defensive values will be a day-to-day effort," Longabardi told Sreekar. "There's no magic wand to immediately get there. That goes for offense too because both sides of the court are connected. If you don't take a good shot on offense, it's going to hurt you on defense. Likewise, if you don't play good defense, you're going to get a worse shot on offense. We're going to have to get consistent effort. We know that there are going to be some nights that we might lose because we're overmatched with talent. But the important thing is to give effort and see progress."

Anyone who watched the Suns last season saw a team displaying those principles on a nightly basis. Every single player was bought into the system. Every one of them.

Mike talked about the pairing of Dragic and Bledsoe in particular, due to their relative lack of size at the 2-guard position.

"Hopefully, their quickness and talent makes up for it. Those guys will learn to be prepared defensively and I will help them prepare. If for some reason we find that the pairing isn't working defensively at some point, it's our job to find a fix. And that goes for every player. Every man will have to be prepared defensively and will have to help cover guys on defense. But the hope with this backcourt is that their quickness and speed provide an advantage for us, making the other team adjust first."

He found a way to make Avery Bradley and Rajon Rondo effective in Boston. Before that, the Celtics made Ray Allen look like a quality defender thanks to team defense that supports each other on every play.

And as we saw, he made Dragic and Bledsoe highly effective on defense as well as offense - just as he predicted before the season began.

The Suns have a keeper in Mike Longabardi as the Suns defensive coordinator. He helped a team devoid of a real "stopper" become a solid defensive team that won games by holding the other team to fewer points per possession than any Suns team in nearly a decade.

Another year under their belts can only help the Suns' returning players improve from where they left off, and help teach the new players acquired this summer how to execute the rotations.

Coach Jeff Hornacek talked at the end of the season how the Suns need to progress on defense next season, and Mike is at the center of that progression.

"We have to really be more solid on the rotations," Hornacek said in the closing press conference. "Not having the breakdowns, especially defensively. To beat the big teams, you can't have 20% of the time going ‘oh yeah I forgot my rotation' or ‘my bad'. It's got to be in that 95-100% you're doing the right thing. You look at these top teams, they are in the right rotation all of the time."

Longabardi said before the season it would be a work in progress. I'm not sure if he expected a building block of a 15th rating in year one, but that's what he got.

Next year should be even better. Longabardi had the Celtics ranked 6th and 2nd in his two seasons as the lead defensive coordinator - at that was with Kevin Garnett, Ray Allen (for one of them) and Paul Pierce aging less than gracefully, while Kendrick Perkins was no longer manning the middle and Rajon Rondo was hurt a lot.

The only question is whether Longabardi will make that next step and become someone's head coach. So far, he has not been named as a candidate at any of the spots currently open. 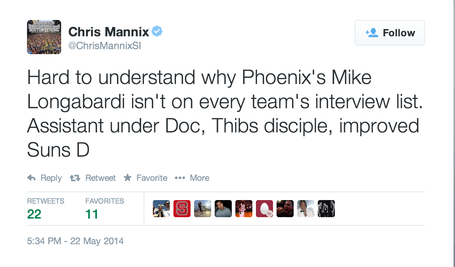 There is conjecture that his name will appear on some lists, and certainly he's got the pedigree. Lately, NBA teams have promoted assistant coaches to their first head coaching spot with success: Tom Thibodeau and Erik Spoelstra started it. Frank Vogel, Indiana, continued it. Last year, nine rookie coaches took to the sidelines and four of them made the playoffs (Dave Joerger, Jason Kidd, Steve Clifford, Mike Budenholzer). Our own coach Hornacek won 48 games but barely missed the cut on the playoffs.

Now Joerger is looking to jump to Minnesota just a year after taking over Memphis' sideline, and other current assistants are getting looks (Tyronne Lue, among others).

Will Longabardi get the call?

We can only wait and see. And hope, selfishly, that he's on the Phoenix sideline again in September when training camp opens.