When the Phoenix Suns surprised everyone in the NBA by masterminding the trade that brought them Eric Bledsoe, the internets exploded with hugely positive Suns transaction news for the first time in years. After years of talk-yourself-into-it deals, the Suns turned Jared Dudley into one of the most exciting young players in the league.

Just that morning, day two of free agency, I had posted an article preaching patience for the new front office while they waited for late-July bargains. Four hours later, the Wojbomb dropped.

Emboldened by my power of persuasion, I had to predict the rest of the summer for us...

Let me try this power out...

Does that work, BSotS fans?

The acquisition of Eric Bledsoe kicked off the new era of Suns basketball with a big bang. From that point on, the future was clear. Convert veterans into youth, and have their teach-first coach learn them the game of basketball.

Bledsoe was one of the first to model the new Suns jerseys, which were rolled out in August to quite the mixture of 'meh' and hate that eventually dissipated into love for the regular home and away unis. 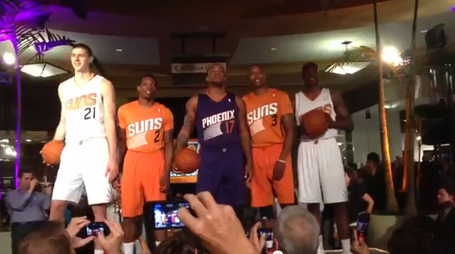 Still, we didn't know what kind of player Bledsoe would become. His career per-36 averages were 12/5/5 with a crazy rate of steals and blocks, but that per-minute rate was in only 20 minutes of playing time. It's much harder to produce stats in every category on 32-36 minutes every game.

At the end of August, Jacob did a Phoenix Philm study on Bledsoe's game, using data and video from mySynergySports.com to detail Bledsoe's game in LA. Jacob had so much to say, he even did a Part II a few days later.

Jacob had some great observations:

Bledsoe's shot is almost more of a set shot than an actual jumper, but if defenders go under and give him plenty of space, he can knock that shot down.

Bledsoe really doesn't have any sort of in-between game. He doesn't really have a pull-up jumper and his floater is far from reliable at this stage. He also doesn't have the patience or savvy of Nash and gets himself out of control too often. His drives are often reckless and his passes wild.

Jeff Hornacek wants his team to run, run, run this year, and Eric Bledsoe seems perfectly suited to do so. Once again, he is incredibly explosive in the open court and can get down the floor in a hurry.

Jared Dudley was skeptical that Bledsoe and Dragic could start together (at the bottom of Jacob's article), but coach jeff Hornacek was always a fan.

It is easy to point out that Bledsoe had career highs in just about every category this season, since his minutes per game jumped by more than 50%. He averaged 17.7 points, 5.5 assists and 4.7 rebounds with a True Shooting Percentage of 58.7% (factoring in three-pointer and free throws).

After putting up per-36-minute numbers of 12/5/5 for his career on short minutes, Bledsoe improved even more than most were willing to hope.

How Eric Bledsoe evolved into a full-time starter was summed up perfectly by our guest writer Bryan Gibberman in early April.

"I'm a little bit more patient than I was coming off the bench," said Bledsoe told Gibberman. "I had to do everything in one stretch and now I can pick my spots."

He points out that, in the Suns offense, Bledsoe takes more spot-up threes than ever before, while still limiting his midrange shots. He also points out that Bledsoe's insane steals and blocks rates declined a bit.

"Some of that is we don't want him to crash the boards," stated Phoenix head coach Jeff Hornacek to Gibberman. "He's got to be one of our defensive guys back there. We say every once in a while if you see a wide open one go for it, but you got to be a little more selective. Same thing defensively, him scrambling around looking for steals, sometimes the gamble pays off, sometimes it doesn't.

"I think early in the season he was just gambling for all kinds of steals and got us into trouble. Recently since he's come back, he's been very smart about when to go for something and when not to, and he's made some big plays that way."

Bledsoe's free throw rate is the highest on Suns out of any player that gets regular rotation minutes helping them rank 11th in the league for free throw attempts per field goal attempts according to basketball-reference.com.

In the 20 games available from last year's SportVU data, (Clippers didn't have the technology and they only played 20 games in arenas with it) his average speed was 4.2 miles per hour and he traveled 3.33 miles per 48 minutes.

--Gibberman, The Evolution of Eric Bledsoe

Taken liberally as a variation of the Splash Brothers in a December game preview, the Slash Brothers nickname stuck for the rest of the season to the point that NBA.com used it several times during promos of late-season games on NBATV.

Both Bledsoe and Dragic attack the basket on the pick-and-roll to either finish at the rim, take a midrange spot-up from a favorite area, pass to popping big or dribble around and pass off to restart with the other. The Suns were very difficult to defend with both in the lineup.

The Suns were 23-11 with both Bledsoe and Dragic in the starting lineup this season.

The presence of Eric Bledsoe to take pressure off, and the schemes of coach Hornacek allowed Bledsoe's backcourt mate Goran Dragic have a career year that won him the league's Most Improved Player award and will likely result in an All-NBA selection.

Bledsoe handled the ball the most when the two shared the court, with Dragic shifting to off-guard and secondary playmaker. Still, Dragic led the team in assists, scoring and shooting in a role very reminiscent of Manu Ginobili in San Antonio.

But he only played 43 of 82 games, due to a shin bruise early in the season and then a torn meniscus that required surgery and a two-month recovery.

The Suns were only 20-19 in games Bledsoe missed.

This marked the second time in four seasons that Bledsoe missed half a year with a knee injury, so there has to be a bit of concern going forward in that area.

Summing it all up

Bledsoe still has a few warts - inconsistent shooting percentage, injuries, quiet personality full of platitudes and inanity - but at 24 years old he is one of the brightest young stars in the league.

He is the complete package: he can score, pass, rebound and defend like few points guards the league has to offer. Westbrook scores better. Curry shoots better. Paul passes better. Conley and Rubio defend better.

But none of them do everything on both ends of the court at the level that Bledsoe offers.

Eric Bledsoe will get paid this summer. It's only a matter of how much.

"The only real unknown for fans is how much money are we going to pay Eric Bledsoe," Suns managing partner Robert Sarver said on KTAR last week. "It's not whether he's going to be here or not."

"I did learn from the Joe Johnson deal that it's just part of the business," he said. "There's an ugly part of this business in terms of how things are negotiated. But that's separate and apart from who the individual is, the basketball part.

"We know Eric works well in our system, we know he and Goran play well together, we know Eric's a competitor, we know Eric's got big cajones and will take that shot at the end when he needs to. And we know he's a really good person and a good teammate, so we don't need to know anything else."

Anything less than an A+ would have to factor in his injury history or his potential contract amount. But the 28-15 Suns record with Bledsoe in the lineup, and his career highs in just about every category are impossible to ignore when it comes to grading his 2013-14 season.