Suns Swag 6/13: Phoenix Gear and the Legal Tender to Buy it With

You just won't look right on your Harley without this jacket.

Share All sharing options for: Suns Swag 6/13: Phoenix Gear and the Legal Tender to Buy it With

Truly some Phoenix Suns (stuff, gear, crap, memorabilia?) that I've never come across before.  There's a buyer out there for everything I suppose.  If you've got a 10 dollar bill in your pocket, there's something you can add to your collection.  Your Suns Swag for June 13th: 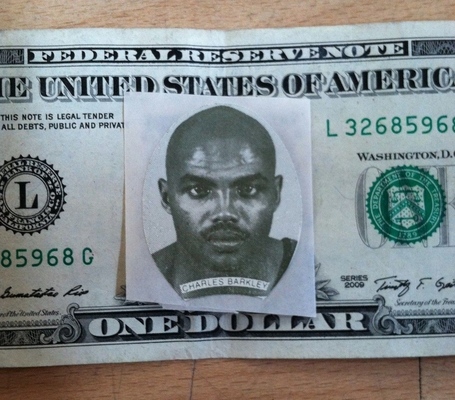 "It is mint condition.  It is legal tender."  It is....a sticker.  Show your appreciation of offensive rebounding and consumerism with a $25 purchase of "Barkley Bucks."  This 1993 offering went to benefit the Auburn University Foundation and the Charles Barkley Minority Scholarship Fund.  Obviously this holds no actual monetary value, but there's no better way to show the drive-thru attendant at In-And-Out that you're not there to mess around.  Hustle up with that double-double.  Just like Sir Charles. 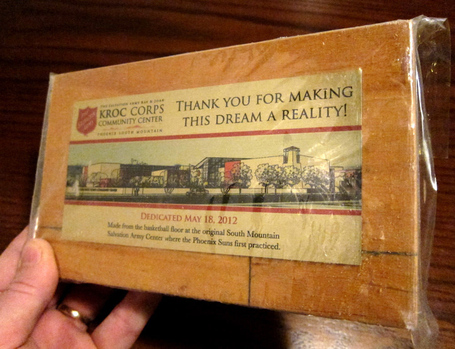 A very cool piece of Suns memorabilia here.  This is a genuine piece of the floor from the original Phoenix Suns practice facility at the Salvation Army Kroc Corps Community Center in South Mountain.  These were presented at the dedication for the new facility on May 18th, 2012.  The item has never been removed from the plastic package, and it's the bargain of the week.  It's available as a "buy it now" purchase for just ten dollars, after shipping. 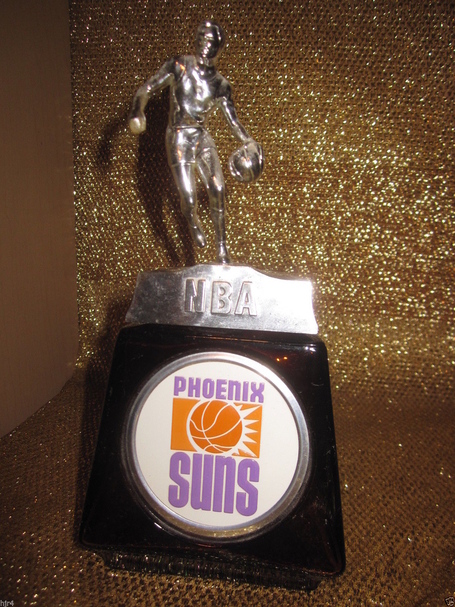 Further evidence that you can take any seemingly worthless item, slap an NBA logo on it, and it's instantly sellable.  This can be the strangest part of your Suns collection for just 45 Barkley Bucks.  This decanter was at one time filled with Avon cologne.  A little research shows that Avon cologne is relatively inexpensive if you're so inclined.  We know what you won't fill it with though.  You won't fill it with Michael Jordan cologne. 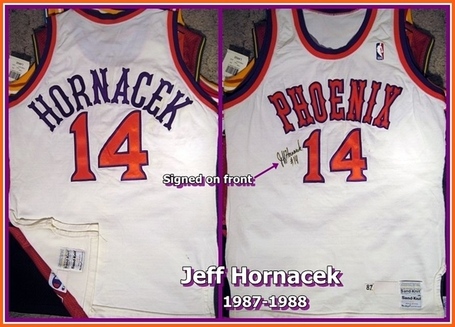 Game used, signed jersey from the current head coach of your Phoenix Suns, Jeff Hornacek.  At $744 this piece checks in considerably cheaper than many of the other game used Phoenix jerseys, and if you click the link, you'll notice the last listing has expired.  Expect this to be reposted at a little bit of a discount.  The '88-'89 Suns won 55 games, and knocked off Denver and Golden State before being swept by the Lakers in the Western Conference Finals.  The 25 year old Hornacek appeared in 78 games, starting 73, and averaged 13.5 points and 6.0 assists.  The Suns were the highest scoring team in the league that season, averaging north of 118 points a game. 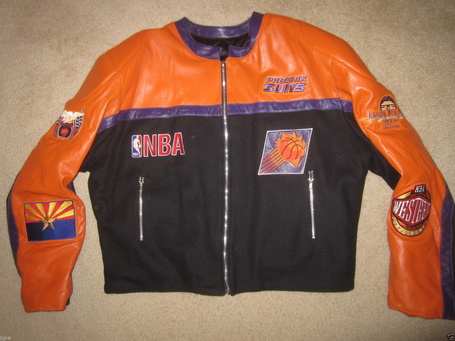 This is the sort of hideous memorabilia truly only sought after by the crazed collector.  If there is in fact a motorcycle enthusiast who is as passionate about his Suns as his Harley Davidson, he has to make an appearance on BSOTS.  $175 bucks and it's yours.  I'd be unqualified to tell you if that is a good price or not for something like this.  I can tell you it's a XXL and "Jeff Hamilton" makes many similar items.  No doubt this was one of their best sellers.  Right?  No?  Maybe not?  Maybe not.