The Phoenix Suns have only three players under contract for more than the next 13 months. To keep or replace most of their roster, the Suns can pay market price in free agency or bring on more rookies. Here's an argument for the latter.

Share All sharing options for: Why the Phoenix Suns should consider keeping three first round draft picks

The Phoenix Suns don't want three rookies on their team this year alongside Alex Len and Archie Goodwin. That makes a ton of sense. If you're looking to win more than a few games and you want to properly develop young players, you can't handle five relative rookies at once.

And I am not advocating turning away from the playoff chase just yet. But the Suns might want to take heed from lessons learned by other teams who rode their cinderella team for too long and ended up right back in the mire of mediocrity. You have to keep cultivating youth on rookie contracts at the same time you're trying to increase the talent base of your veteran roster.

Just look at the San Antonio Spurs, who had only one lottery pick on their championship team this year (Tim Duncan). Otherwise, they wisely used the draft the retool their team on the fly. Most recently, they hit on Kawhi Leonard in the 2011 draft after getting booted in their last two playoff series.

A year ago, the Suns only had two very young players on rookie contracts - Archie Goodwin and Alex Len at 19 and 20 years old respectively. Everyone else on the roster was 24 or older.

Let me repeat that for those who believed this Suns team was really, really young last year: Only Len and Goodwin were under 24 years old. Sure, the Suns had the second-least NBA experience in the league, but they were just middle of the pack in average age of its rotation players (26.1 yrs old). They're no spring chickens.

Len and Goodwin both have 3 more years on cheap rookie contracts before hitting free agency.

GM Ryan McDonough recently said that the best teams have three levels of players on their roster - the really young guys not yet ready for the rotation, the mid-20s guys who get the most run and the 30-ish veterans who lead the locker room.

The Suns had some breakthrough years from their mid-20s guys in 2013-14. Fourth-year PG Eric Bledsoe (24) proved he's a difference maker in the starting lineup with 18 points, 5 assists and 5 rebounds as his new baseline. Third-year players Markieff Morris and Marcus Morris (both 24) put up career high numbers. Markieff came in fourth in the Sixth Man of the Year award. And second year player Miles Plumlee, the oldest of this group at 25, proved himself a starting caliber center in the league.

The great thing about these guys and the young guys is how cheap they are, thanks to the rookie scale contracts for their first four years.

Bledsoe and Morrii are up for extensions in the next 13 months, potentially skyrocketing their cap hits. Bledsoe could get 600% raise, while the Morrii could easily double their contracts.

Their collective cap hit could rise from just under $7 million to a whopping $30 million in the next 13 months.

Plumlee still has two more years before he's due an extension, but at that point his salary could increase tenfold. Rim-protecting centers get paid.

In their prime, outplaying their contracts (3)

This group is not on rookie contracts and all are looking for big raises in the next 13 months. Tucker might quintuple his $800,000k contract (or more) this summer, while Dragic and Green could both get 50% raises as soon as they hit the market in 2015.

These three could see their current cap hit rise from a collective $12 million per year to $20-25 million.

Sorry Channing Frye. You're still 15 years younger than me, but you're old in NBA years. Frye is the only guy on this team with a downhill view of his NBA future.

Still, Frye is free agent either this year or next, depending on whether he picks up his player option. HIs decision is due Monday.

Just simply keeping the band together could cost way too much, given that it's hard to see this current team's ceiling much higher than 50 wins and a first-round playoff trip. Maybe 55 wins and a second round appearance? But not contender-worthy.

The Suns have to expect turnover, and have to keep churning out guys who are outperforming their contracts. You can't do that without bringing in new, young blood.

By July 2015, every player on this roster not named Goodwin, Len, Plumlee or "2014 and 2015 first round pick" will be a free agent looking for a new contract. 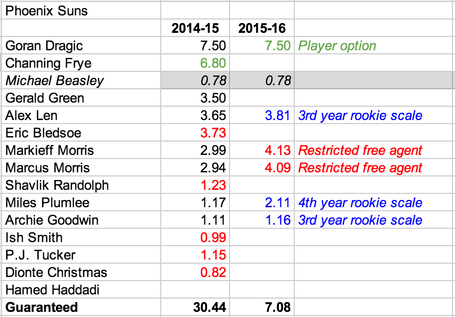 Black and blue: Numbers denoted in black are guaranteed salaries, while the ones in blue are rookie scale team options almost certain to be exercised.

Green and red: The items in green are player options, and the items in red are non-guaranteed years or 5th year qualifying offers unlikely to be signed in lieu of restricted free agency.

While we only talk about Bledsoe and Tucker this summer, just seven players have guaranteed deals for next season. And then a year later every other player could leave either at their discretion or the Suns'.

This is not to say there will be complete roster turnover in the next 13 months. It's to say that if these guys stay, they will be a lot more expensive.

Frankly, if every Suns free agent signs a deal to stay in the valley long-term, the Suns will nearly double their salary obligations in the next 13 months and almost reach the salary cap without adding a single new player.

That's why you need to keep bringing in guys on the 4-year rookie scale contracts. Otherwise, you'll never be able to afford that top end guy you want to put you over the top. The Suns won't bring in three first round picks simply because of logistics and difficultly in proper player development alongside Archie and Alex.

And they won't be down to 3 players next summer because this summer they will commit long-term money to a couple of veteran free agents and, no matter what, they figure to have at least 2 draft picks out of this year and next even if they trade most of them away.

But rookies are cheaper. And in a year, your entire PG, PF and SF rotations could be gone to other teams. They won't be gone en masse, but they COULD.

It would be smart for the Suns to draft players who could someday earn those minutes so when a free agent leaves there is a replacement already in-house for them.

Just keep that Suns' contract situations in mind when you suggest trading away draft picks. Draft picks are cheap. Market-price free agents are not.