14. 18. 27. The Suns are in an enviable position heading into what is widely considered a deep draft with three first round picks. Fans are brimming with confidence in their new GM's ability to pluck talent from the crop of draftees, but what are the odds of those players being NBA ready in their first seasons?

Share All sharing options for: History shows the Phoenix Suns may not get immediate contribution out of their first round draft picks

The Suns will likely be in for some roster attrition in the coming days. Eric Bledsoe and P.J. Tucker are restricted free agents. Channing Frye may have opted out of his contract by the time this story shows up on your box of everything. Ish Smith doesn't have a stranglehold on the backup point guard duties and the end of the bench features some eminently replaceable players.

The Suns roster is likely to go through a significant permutation. It needs to. Last season was part of a renascence, but one that saw the team fall short of the playoffs. The team needs to get better and internal improvement isn't going to be enough.

Part of the evolution of the team will be the addition of rookie players through the upcoming draft. The exact degree of that addition is still lent to caprice, with a tempest of rumors swirling and Ryan McDonough's own admission that the team doesn't want to add all three of their current picks to next season's roster.

Another harbinger of Thursday's selection process is McDonough's stance that he will select the players he feels have the ultimately highest ceilings. He's looking to win the draft years down the line, irrespective of immediate gratification. He can't perform McMiracles by being shortsighted.

Obviously that was his strategy last season, as he drafted players that showed glimpses of what they may eventually evolve into... but made very little immediate impact.

Will that translate into another draft with similar returns? Is it very likely that there is even a choice?

I will curtail the rest of the analysis and get down to brass tacks (an idiom with its own shrouded beginnings). The rest of this story relies heavily on charts, so for those of you with an aversion to factual research used to back up observed trends... at least I tricked you into reading this far.

The following chart (well, it's a little ways down) is a list of all the rookies that played for Western Conference playoff teams in the past six seasons. Why six? At first I was going to go with five, but then it occurred to me that I didn't want the lockout season to skew the data. It turned out that it didn't, but I still stayed with six because it gave me another season of how the Suns' adversaries were drafting.

Why playoff teams? Because I'm assuming the goal is for the Suns to challenge for a playoff spot next season... which would make this examination very relevant to the rookies on the team.

Out of the six seasons the Suns were included only once... and they picked Earl Clark (14) and Taylor Griffin (48). Ouch. I'm not sure which stings worse, that the Suns have made the playoffs only once in the past six seasons or the putrescence of those picks.

Glad to brighten up your day.

So, how much production did playoff teams get out of their first round draft picks?

I looked at first round picks that played at least 1,000 minutes in their rookie season. That's a little over 12 minutes a game extrapolated across an 82 game season. I didn't factor in the quality of those minutes. A player could have had a net negative on the team, but if they still played him it counts.

2008/09 - This season George Hill (26) and Nicolas Batum (25) met the requirement. The Blazers actually got contributions from three rookies, but two of those (Rudy Fernandez and Greg Oden) were drafted in previous seasons and don't fit the criteria.

2009/10 - Ty Lawson (18) and James Harden (3) qualified. Wesley Matthews was undrafted, and incredibly beat out the rest of this class. We also see that Serge Ibaka was drafted previously and DeJuan Blair (37) went in the second round (we'll touch on some of these players later).

2010/11 - This one is a vacuous void of first round production. Gary Neal led the class despite going undrafted. That's two years in a row that a guy off the street led all rookies in minutes played on playoff teams.

2011/12 - Here are a couple standouts that give the Suns a lambent hope. Kawhi Leonard (15) and Kenneth Faried (22) both made an instant impact after being drafted in a spot similar to where the Suns currently stand. Unfortunately, the Suns whiffed in that draft.

2012/13 - Harrison Barnes (7) and Festus Ezeli (30) helped propel a surprisingly potent Warriors team to an exciting playoff run. Draymond Green (35) also joined that precocious duo, but was selected in the second round. The Warriors had a pretty decent draft.

2013/14 - Steven Adams (12). That's it. Adams was also notably effective for periods in the playoffs and seems to have some good basketball in front of him. Nick Calathes would have joined him, but was a holdover from a previous draft.

So... Out of 48 team seasons nine first round picks made an impact according to the (admittedly simplistic and arbitrary) minute mark I chose.

But, you surmise, those playoff teams probably didn't have multiple picks, or any at all for that matter. They did have 39 combined, though.

There were also two undrafted players, four holdovers and two second round picks. Eight more. Put that at 17 total and those playoff teams only had about a 35% chance of finding a contributing player by exhausting all resources.

Check out the data I complied in the chart below. Labor of love and whatnot... 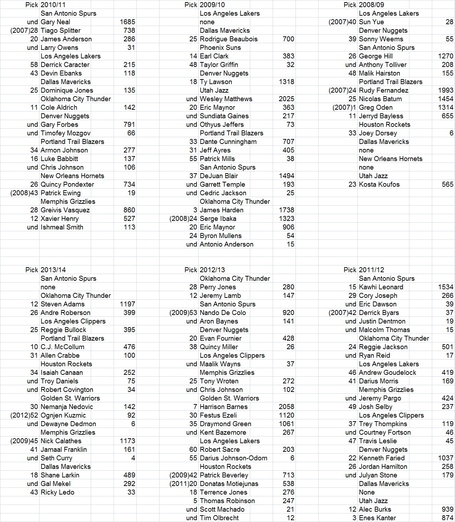 Now let's perambulate through another set of data I complied, this one a look at the recent history of the 14th, 18th and 27th picks. Only seven out of these 18 met the 1,000 minute mark... completely irrespective of the team's record that season.

Interestingly, Eric Bledsoe led the charge, but his numbers were pretty underwhelming. Despite that, none of the other 17 players bested his 3.6 assists per game. Only Jordan Crawford scored in double digits (11.7) and nobody managed even six rebounds a game.

The composite below shows that the mean player in this range over the last six seasons is basically a scrub. 14.4 minutes, 5.2 points, 2.9 rebounds and one assist per game.

That's not good, either. 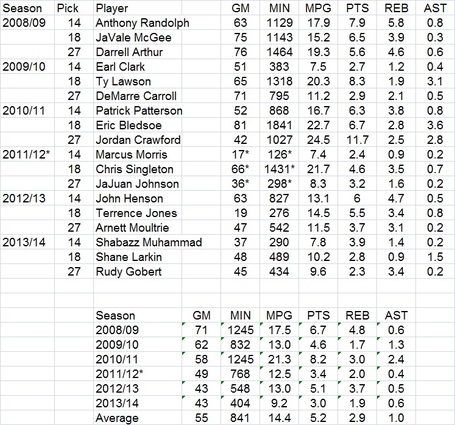 But how does that compare to last season's draft darlings?

Ryan McDonough wasn't drafting for NBA ready players last season and he isn't going to be this season. There's always a chance of pulling a Kawhi Leonard (who still only averaged eight points and five rebounds a game in his rookie season), but there's also a real chance that it will take a couple years (like with Markieff Morris) to get anything legitimately positive out of these guys.

So go in to the draft full of hope, but don't expect an instant rotation player to pop on a Suns cap on Thursday. That's why Ryan McDonough doesn't want a roster full of rookies and tyros.