Roundup of the knee-jerk morning-after grades for the Phoenix Suns draft, in which they selected T.J. Warren, Tyler Ennis, Bogdan Bogdanovic and Alec Brown.

Share All sharing options for: 2014 NBA Draft Grades for the Phoenix Suns

I know, I know, morning-after draft grades are a total crapshoot. We haven't spent the past year heavily evaluating these guys like each team's front office has done. Many of these guys have been scouted for several years by now.

But we all like to judge other people, so let's stop fooling ourselves that these grades mean nothing to us. It's human nature to pass judgment.

So let's see what national outlets are saying about the Suns draft this morning. Click the link on the outlet's name to see grades for all teams. 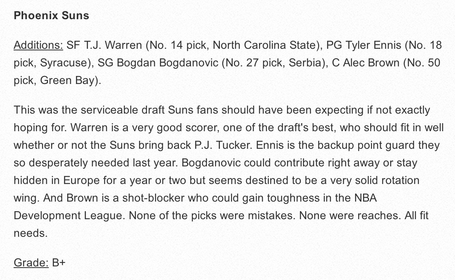 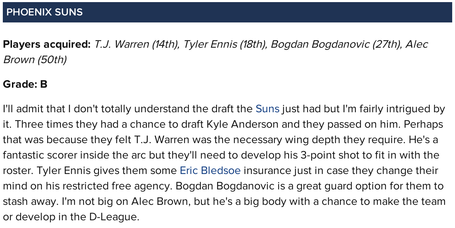 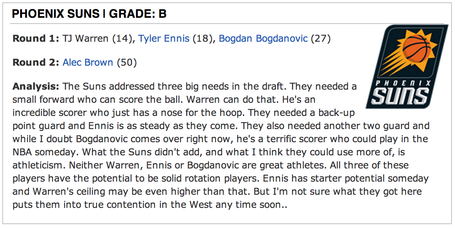 There you have it, folks. If you woke up feeling meh, you're as unsure as the rest of the nation. This was an unexpected draft, to be sure.

But how unexpected was it?

According to the Suns, they got the guys they wanted. They made a promise (reportedly) to Warren and they really liked Ennis. Bogdanovic was the best "stash" player on the board at 27.

While it will be years before we know the actual outcome of this draft, can we at least wait until Summer League in two weeks to decide if any of these guys is a bust?