Start Your Engines! Phoenix Suns owner plans to spend way over the cap this summer

In a radio interview with John Gambodoro of Arizona Sports just before the 2014 Draft, Suns managing partner Robert Sarver expressed an expectation that the Suns would spend big this summer in free agency.

Share All sharing options for: Start Your Engines! Phoenix Suns owner plans to spend way over the cap this summer

The Phoenix Suns enter the free agency period, which starts on July 1, with a ton of cap space available to spend on free agents this summer.

But with a limited talent pool from which to choose, do the Suns plan to spend it?

"Yeah I think we will spend it," said the man with the money, Managing Parter Robert Sarver told John Gambodoro on Thursday. "Hopefully we will spend a lot more than that."

Wait, what? How can you spend more than the the salary cap?

The only way to spend more than the cap is to keep Eric Bledsoe and P.J. Tucker. Read on.

For teams that are under the salary cap, the Collective Bargaining Agreement (CBA) provides a ceiling of player salary commitments each year. For the purposes of signing new contracts, a team cannot spend more than that ceiling to sign a new player.

For example, if you have $10 in your pocket, you can't buy a new set of 'Beats by Dr. Dre' with cash. That's the idea of the cap. You can buy nine items off the dollar menu at McDonalds (because you have to figure in sales tax) but you can't buy nine Happy Meals.

Fortunately, the NBA devised some loopholes called 'cap exceptions'. For teams who start the summer UNDER the cap, like the Phoenix Suns, there are only two exceptions at their disposal:

Let's talk about these further.

Named after the guy this exception was designed for, Larry Bird, this exception allows the incumbent team to re-sign its own free agent to a market-price salary without regard to the salary cap.

Terrible analogy, I know, but it explains the point.

In the case of the Suns, this rule applies to three players whose contracts expire on Monday: P.J. Tucker, Eric Bledsoe and Channing Frye.

The Suns can re-sign those players at market prices, without regard to the cap. However, its not that easy.

Here's the trick. Before the players are re-signed, there is a 'cap hold' on them. The cap hold is a factor of their last contract, and is generally designed to be bigger than their market value. The idea here is so you're not allowed to buy those nine dollar menu items and THEN renew your lease on the Beats headphones. You're supposed to have to choose.

In Channing's case, his cap hold is bigger than anything he will get on the open market. So, the Suns will have to choose between him and another player or players.

But in Bledsoe and Tucker's cases, their cap holds are smaller than their market value. So the Suns don't have to choose. The Suns can spend a lot of money, and THEN re-sign them to deals bigger than their cap hold after having already signed other guy(s).

How much can they spend?

Spending right up to the cap

If the Suns decide to completely move on from all non-guaranteed players and all their free agents, they could spend as much as $36.14 million in first-year salaries for new players on the open market starting July 1. This would put them RIGHT AT the new cap, not exceeding it this year. 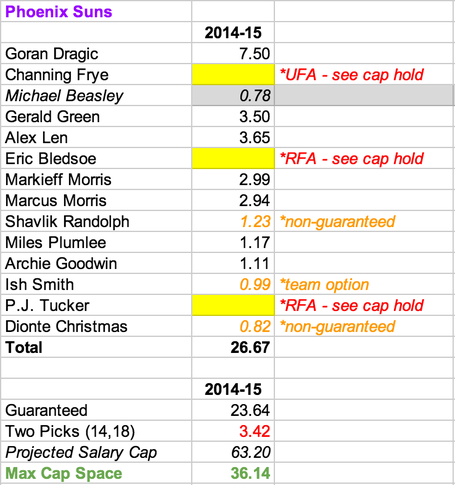 The Suns have nine players, including two draft picks, with guaranteed contracts in 2014-15. But those nine players only cost just over $30 million in 2014-15 thanks to mostly rookie-scale contracts.

To spend all that money on new players, the Suns would have to renounce their Bird Rights (ability to exceed cap to keep them) to all three of Bledsoe, Tucker and Frye. That's giving away three starters from last year's team, but if the Suns decide there are better options out there, they can do that.

So, if LeBron James says "hellz yeah, as long as you gimme the max and sign another big-name guy for the other 10 mil I don't want Bledsoe, Tucker or Frye", the Suns can say, "Cool, cool, cool. Let's do it!"

But by keeping Bledsoe and/or Tucker, the Suns can spend more money than any other scenario.

"This would be a good year for us to do that," Sarver said, of exceeding the cap, "Given the situation with the cap holds. We have an opportunity with the right players to spend that."

Likely, even a LeBron James will want the Suns to be able to keep one or more of Bledsoe, Tucker and Frye.

The likely "working number" for the Suns, in order to retain their Bird Rights on all three guys, is just over $17 million.

That $17 million still gives them a lot of money to spend while retaining their ability to exceed the cap to re-sign Bledsoe, Tucker and Frye to salaries larger than their cap hold.

But it won't get you a max player.

However, there's no reason to think Frye will get more than $9.6 million in 2014-15 from ANY team, so it's quite possible the Suns will renounce his Bird Rights if they need more than $17 million in early July. They could still re-sign Frye, but just using whatever room is left under the salary cap at the time.

So, a reasonable number to sign some combination of new players AND Frye to market price would be just under $27 million, while retaining the right to exceed the cap Bledsoe and/or Tucker.

That's enough to sign LeBron James (for example) off the street and still come back after that and re-sign Tucker AND Bledsoe to market prices.

Or, the Suns could sign a couple of $10 million/yr free agents THEN re-sign Frye THEN Bledsoe AND Tucker, in that order.

Once the Suns have reached the cap with signings and/or trades, they will get access to this thing called the 'Room' Exception.

If they still don't have enough players under contract, they can sign spend up to another $2.5 million in salaries over and above what they've already spent.

Adding all these exceptions together, the Suns could end up having exceeded the cap by as much as $10 million per year.

Will they do it?

"You can't spend to spend," Sarver said, possibly recalling the summers of 2010 and 2012. "You've got to make sure get the right people in there. You can't use all your powder just to use it."

Sarver says he's learned some lessons the hard way over the years.

He says he's learned some lessons.

"Two big things I learned," he said to Gambo. "Sometimes if you have something really good, you think the grass is greener somewhere else. You try to get better but you also have the chance of getting worse in trying to get better."

His second lesson was interesting.

"How you look at situations always depends on what seat you personally sit in," he said. "As an owner, I'm better at balancing out the desires of the coach, the GM and the owner. Right now versus short term vs long term."

So now he understands that it's a delicate balance between improving the team and making it worse. And now he's ready to listen to a good front office giving him advice.

In McBabbaRobacek I trust. I have to.