How the Phoenix Suns could get LeBron James, Kevin Love and Eric Bledsoe together

You thought the Phoenix Suns would be happy with just getting second tier guys? Think again.

Share All sharing options for: How the Phoenix Suns could get LeBron James, Kevin Love and Eric Bledsoe together

Draft night has come and gone, and whether or not you're feeling good about the Phoenix Suns's haul of T.J. Warren, Tyler Ennis, and Bogdan Bogdanovich, there is at least one small silver lining to take away from the night; Kevin Love has still not been traded, which means that we can still entertain the possibility of the power forward making a new home in the valley. Tweets like these, from Minnesota sports beat writer Darren Wolfson, only add fuel to the fire: 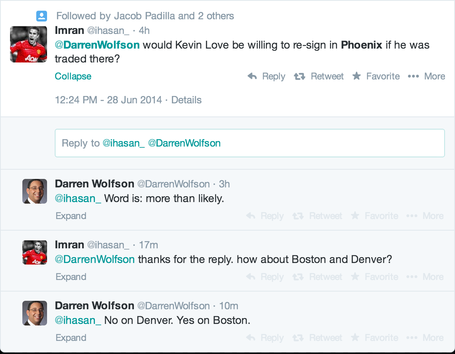 You better believe this has us going nuts. Are we delusional? Probably. We like to dream big. But hey, why stop there?

How does a core of Eric Bledsoe, Kevin Love, AND LeBron James sound?

I know, I know. It's a ridiculous hypothetical. But after the most recent Wojbomb, it seems like the Suns are putting the fullcourt press on LeBron. It's not as out there as you think.

Armed with an offer that no else in the NBA can make - a chance to partner with Carmelo Anthony on an instant championship contender - the Phoenix Suns are planning an aggressive pursuit of LeBron James on Tuesday, league sources told Yahoo Sports.

Suns officials understand the bid will be something of a long shot, but are determined to get a meeting with James to convince him how the possibilities of two full max contracts, a roster stocked with talented, young players and the chance to pick the superstar free-agent partner of his choice ought to make Phoenix one of his most appealing suitors.

The Suns' flexibility allows for James to pick any free agent - this summer or next - for himself. It could be Anthony or Chris Bosh this summer, Kevin Love next summer.

Getting LeBron AND Love would take some crazy front office wizardry from Ryan McDonough, but it's well within the realm of possibility, and really, is it any crazier than James, Dwyane Wade, and Chris Bosh teaming up in Miami in 2010?  We would be remiss if we didn't at least have a discussion about the possibility, right...?

If I haven't lost you yet, let me break down how it would work.  LeBron James will become a free agent on July 1.  Unfortunately, a close relationship with Eric Bledsoe and a decent Suns 2013-2014 campaign probably won't be enough to sway the King to sign in Phoenix.  That means the Suns would have to turn Phoenix into a more attractive destination (the promise of a dry heat just isn't going to cut it).  The best way to do that is to land Kevin Love.

You throw the kitchen sink Minnesota.  Anyone and everyone not named Bledsoe is expendable (remember, Bledsoe is going to be a key part in luring James to Phoenix).  It will require jettisoning many, if not all, of the assets Phoenix has painstakingly acquired over the last few years, but this is exactly what they were attained for.  For the Suns to come out on top of the Summer of Love, they would likely have to offer some combination of Goran Dragic (gulp), the Morris twins, either Alex Len or Miles Plumlee, and that juicy Laker's 2015 pick.  Even that may not be enough.  It might require giving back Minny's 2015 pick, or future Phoenix picks, or Gerald Green, and taking back contracts like Corey Brewer or Kevin Martin.  Fine, so be it.  It's all part of the plan.

The loss of Dragic would be tough to swallow, but it would be a necessary sacrifice.  Dragic, a player who could surely coexist on the court with Ricky Rubio, would be the selling point.  Flip Saunders is going to be in win-now mode as the new head coach, so he's going to want players who can actually win him games.

That's a pretty good deal for both teams, and Minnesota isn't going to find anything much better than that.  Phoenix gets their All-Star and hangs on to Bledsoe, while Minny gets a wealth of young, quality players.   The Suns take on a little over $3.3 million in contracts, putting them at around $30.4 million on the books for 2014-2015, by my calculations (This is with Warren and Ennis's projected salaries being around $1.9 million and and $1.6 million, respectively).

Next comes Bledsoe.  With any luck, the Suns could sign Bledsoe up for a little less than the max before suitors come around, but the more likely scenario is someone will sign Bledsoe to a max offer sheet and Phoenix will be forced to match.  His max is projected to be around $14.2 million.  We're now looking at about $44.6 in salaries for the Suns, which would only leave them with $18.6 million to offer LeBron, more than a few sheckles short of his full max.  This would require renouncing Frye and P.J. Tucker's respective bird rights, as well.

Unless they get a little sneaky with the rules.  I'm no CBA expert, but I believe the Suns could get away with renouncing the bird rights to Frye and Tucker, signing LeBron to a full max, and then signing Bledsoe to his max using the Bird exception to exceed the cap.  This way, both players are paid the max amount of money possible.  In order for this to happen, however, Phoenix would have to convince Bledsoe to 1. Talk LeBron into coming here (shouldn't be a problem with newly acquired Kevin Love and their close relationship!) 2. Not sign any other team's offer sheets 3. Hang tight while they take care of LeBron, with a wink-wink that they will give him his max afterwards.

So, to recap, the Suns would:

And with that, the Phoenix Suns instantly become the most entertaining team in basketball.  Try to imagine Love flinging a full court pass to LeBron for a breakaway jam.  Or Bledsoe slashing his way to the hoop and dishing it off for a Love three.  Saying James and Love would thrive in Jeff Hornacek's is an understatement; it's like it was made for them.  Frye had an impressive year as a floor-spreading big man on the Suns, and, although Love only shot a hair better than Frye, he would arguably shoot better in a system that catered to his shooting and found him more open looks.  James is the athletic small forward the Suns have not seen since Shawn Marion.  He becomes the go-to guy Phoenix has desperately needed, and his playmaking would nullify the team's shockingly abysmal assist rate.  Both James and Love give the team low-post options as well, something it sorely lacked outside of Markieff Morris last season.  With Bledsoe slashing, James playmaking, and Love destroying the post and three-point line, the Suns would jump from an already impressive offense to a top three offense (Kevin Love helped Minnesota rank third in offensive rating last year, so just imagine what he could do with LeBron and Bledsoe in a fast paced offense).

Love's shortcomings would become moot points on this wonderful hypothetical team; he could let LeBron handle the clutch duties and could be easily hidden on defense.  Plumlee proved to be a capable rim protector last season.  Bledsoe and James would be an absolutely nightmarish defensive tandem.  The rest of the team could pick up Love's slack, so long as he keeps up the good work on rebounds.

We've also never seen LeBron play with a competent point guard before (Sorry, Mo Williams).  Bledsoe is the perfect point guard for him, as he is, you know, mini-Lebron.  With Love spacing the floor, it's hard to imagine how much damage James and Bledsoe could do off the drive or pick-and-rolls.  Remember that play Phoenix used to run last year, where both Plumlee and Frye would screen Dragic's man, with Plumlee rolling to the basket and Frye popping out to the three-point line?  Now picture that with Bledsoe, LeBron, and Love.  That play is unstoppable.  Hornacek would have some new weapons to scheme for, and it would be interesting to see what he would come up with.

As far as the rest of the team goes, Plumlee and Martin would round out the starting lineup.  In a perfect world, which, let's be honest, this isn't far from one as it is, Phoenix would be able to talk one of Frye or Tucker into taking a paycut; they could be paid with that little bit of extra cap room after signing LeBron, or with the room exception after the team is over the cap.  If not, the Suns would have to find some other veterans to sign with that money.  The rest of the bench mob would consist of Archie Goodwin, Ennis, and Warren.  That unit is incredibly young, but ideally Goodwin would develop enough that he could start, and Martin could go to the bench to help balance things out.  Throw in a shooter, and the Bledsoe-James-Love core would be flanked with youth and shooting.  That's a contender.  Just imagine all of the small ball lineups Hornacek could tinker with.

But unfortunately that's all we can do with this scenario: imagine.  It's incredibly unlikely that Phoenix gets one of these guys, let alone both of them.  James and Love would both be perfect fits in the valley, but I wouldn't expect to see them donning the purple and orange next season.  Sure, cross your fingers, just don't hold your breath for them.  It's fun to pretend, though, isn't it?  And hey, if it doesn't work out this season, maybe LeBron will only sign a one year deal with Miami and Love will opt out from whatever team he lands on next year, and we can try this again in 2015.  Even a slim chance is some chance.  The thing to take away here, however, is that the Suns have a lot of flexibility to land big name players.  They have tons of assets to swing a trade, and tons of cap space to land a star free agent.  So don't be too upset if it's not Love or James; there are plenty of other options out there.