The Phoenix Suns are in a bunch of rumors so far, but nothing more concrete than "interest". 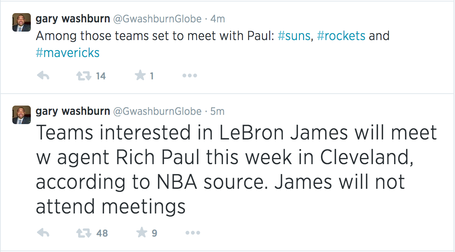 Just hours ago, John Gambodoro of KTAR/Arizona Sports said the Suns wouldn't just wait around for James more than a day or two before moving on to other targets.

One Suns fan tweeted me that Bledsoe posted a pic on instagram today with him in a Suns jersey before taking it back down.

Here's a Bledsoe scouting video made by the inimitable Mike Schmitz of draftexpress.com

Kyle Lowry will reportedly get an offer from Toronto starting between $12 mill - $14.5 mill per season. Any thoughts that Bledsoe would get less than max should be thrown out the door.

Rumor has it from Jazz media that the Suns will make a big offer to Hayward in free agency, but that the Jazz would likely match.

I can only expect that Hayward is a Plan B, when/if James picks another team.

Interest in other players will be rampant since the Suns have nearly the most cap room on the market. Every agent will say the Suns have interest. That includes Pau Gasol, Kent Bazemore, Trevor Ariza and more.