The life cycle of a point guard: How long can Goran Dragic breathe fire?

Can a look at the careers of the last 23 All-NBA point guards help predict the longevity of Goran Dragic?

Share All sharing options for: The life cycle of a point guard: How long can Goran Dragic breathe fire?

Goran Dragic's age has been a topic of discussion on the site lately. Even though Goran just turned 28, the clock is always ticking on a player's career. Dragic has the ability to opt out of his current contract after next season, which he will undoubtedly do, leaving him looking for a new deal at the age of 29. If he inks a new four year deal he would be playing the last season of it at the age of 32.

Is there a way to gauge the breaking point from the acme of a prime window to the declivitous descent into a reduced role and retirement?

Here's what I did.

The first chart below is a list of every point guard that has made an All-NBA team since 1993-94. That's the 20 seasons prior to this year's selections (21 seasons total). This season Damian Lillard and Goran Dragic entered the fold.

Hopefully it's fairly lucid. It tracks the WS/48 of each player based on their age. At the end is the player's career WS/48. At the bottom is the average of the players by year. In that bottom right corner is the average excluding an outlier (John Stockton).

Feel free to look at the chart first or read the exclusions below beforehand.  Switching back and forth might even help.

The following player seasons were not included due to injuries (Rose - knee) or other circumstances (KJ - retirement) that made them miss nearly all or all of the listed seasons...

Many of the zeros, but not all, and that random X are covered under the umbrella of the exclusions. I felt that very limited sample sizes from those seasons, in the cases where the players participated in any games, skewed the data. I will address the ramifications of these seasons at a later point.

Please note that these numbers would have a decimal point in front of them.  I entered the data this way to make the process easier for me. 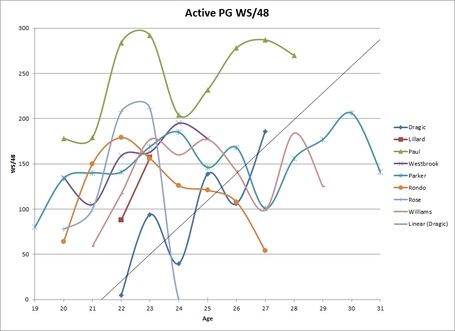 I put a trendline through Goran's curve that adumbrates rather auspiciously. This would certainly indicate that he's on his way up. Chris Paul absolutely destroys this metric... too bad he can't win in the playoffs. Taking Paul out of the picture, Dragic seems to be right in the mix with this group. 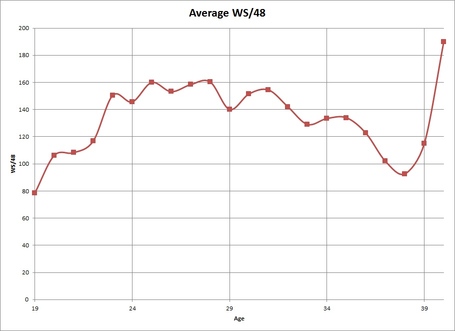 Here comes the gist of my calculus. By taking the WS/48 of the last 23 All-NBA point guards I have set up an average total by age. The range of 25-28 is definitely the highest out of this sample. I think it's a pretty decent sample. The unexpected drop at the age of 29 is due to the anchor effect of Gilbert Arenas and Baron Davis. Unfortunately, those scores were just due to them playing that bad... Obviously, nobody is going to mistake either of those guys for a paradigm of career management.

Take that out of the equation and the window seems to swell to 25-31. Starting with 32, though, there is definitely a drop off. This next graph exacerbates the decline. 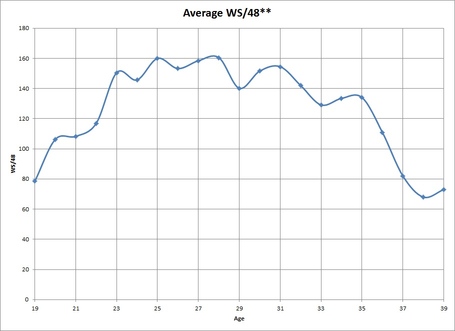 **This graph is the same as the last graph except that it excludes John Stockton's last five years. Stockton's longevity was just ridiculous. Now look at that drop off starting at 31. It looks like it would make an awesome water slide.

Now let's factor in something else... Retirement.

Not only does the decline apparently start around 31, but Arenas, Davis, Marbury, KJ and (basically) Hardaway were done by the age of 33. That's five out of fifteen.

What does this tell us about Goran?

Well, the numbers show that the most likely prognosis is retirement or a decrease in performance by the age of 33.

Then again, there are examples like Kidd, Nash, Billups and Stockton that evince it is possible to play productively to a later age. Even with those players, except for Stockton, there was a drop off at 33 and none of them were able to duplicate their peak years.

Injury also plays a role. Several of the players in the exclusions section were severely hindered by various ailments. Sometimes they recovered and sometimes it affected the rest of their career.

I'll concede that Goran isn't going to flame out due to some bizarre series of horrible decisions (Arenas) or gain 50 pounds (Davis).

My interpretation of this data is that Dragic will very likely be a safe bet to sign to a new four year deal after his current one expires. Another year like the one he just finished will further entrench him as belonging in this prestigious group. He is definitely one of the late bloomers.

Barring injury, this supports Dragic's ability to play at a high level for the next four years and then play at a decreasing, but still productive level for 3-4 season past that (34-35).

**Win shares is just one metric that can be useful along with other evaluation tools to gain a broader perspective of performance. There is nothing that makes it definitive in gauging the performance of a player.