Can Glenn Robinson III corral his physical gifts into a high-level NBA player?

Michigan's Glenn Robinson III's road to the 2014 NBA Draft has been like a drive through side streets in a town you are unfamiliar with. You know where you will eventually end up, but some points in the adventure are smoother than others.

When Robinson signed with the Wolverines he was a top 100 recruit, yet not an elite prospect.  The big name Michigan hauled in was center Mitch McGary.  As the 2012-2013 season neared "GR3" shot up the recruiting charts becoming Michigan's highest rated prospect ahead of McGary and another top 100 recruit, Nik Stauskus.

The fact he was playing in the Big 10, the same conference his father, Glenn Robinson, ran roughshod through in the early 1990s didn't help matters.  The expectations became out of whack.

When it was all said and done "GR3" put together an accomplished two seasons in Ann Arbor from a personal and team perspective despite whatever the perception may be.

Now Robinson faces another challenge as his professional career rapidly approaches.  Even with his college success, his game's flaws along with positive attributes make projecting what he will do at the next level a difficult task.

Glenn Robinson III will be an NBA player.  The question hanging over his head is what will be his place in the league.

From his freshman to sophomore year Robinson did a nice job expanding his game.  This is exemplified in the following three charts, which will show according to MySynergy Sports the type of plays he used, his eFG% (accounting for threes) and his points per possessions.

GR3 was featured in more isolations and handling the ball in the pick and roll.  This caused his true shooting percentage to drop from .626 his freshman year to .566 in year two.  The .50 percent drop is completely understandable given the new role and the number stayed extremely respectable.

He still produced at a fantastic rate in transition and off of cuts, which will without question be his two biggest strengths at the next level.  When Robinson is able to get moving towards the rim with a running start he is a tremendous finisher.  He produced an incredible amount of highlight reel dunks and alley oops, along with crafty finishes on difficult attempts.

The two main concerns when it comes to GR3's offensive game at the NBA level are his ability to create his own shot off the dribble and whether or not he can shoot well enough for opponents to respect his jumper.

With this chart from a story posted on umhoops.com right before March Madness started you can see how Robinson shot across his sophomore season. 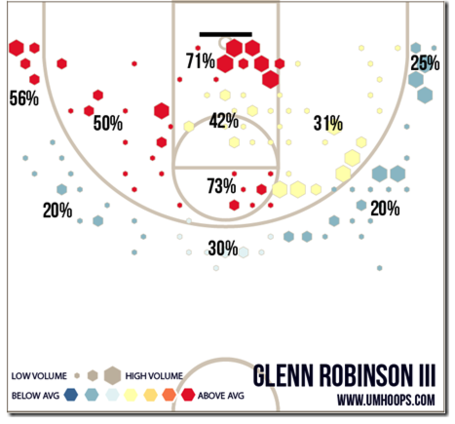 It's pretty clear Robinson was most comfortable working in the foul line area, at the rim and on the left side of the court.

The corner threes were obviously of the catch and shoot variety.  The left wing jumpers and foul line area work was usually accomplished with one or two dribbles, using his athleticism to rise up and shoot over defenders.

His success on jumpers came in these two specific areas, while he struggled in most other places, most worrisome being the above the break threes.

"I think Robinson is a better shooter than his numbers indicate," said Suns general manager Ryan McDonough after Monday morning's workout.  "He's very young (20 years old). His stroke looks good when you watch him shoot even from the NBA lines then you look at his percentages and I was a little surprised they were as low as they were."

"I think that's a matter of time and repetition with him.  He's got physically what you're looking for in terms of size, length and athleticism.  Once he gets that shooting down he will be a pretty complete player."

Where you get concerned about "GR3's" offensive game is he struggled to break down players off the dribble and he was playing the four at Michigan.  He will have to play more of a wing position in the NBA mainly because of issues at the defensive end.

"It's always an advantage for a smaller guy to go up against a little bit of a bigger guy," said Suns head coach Jeff Hornacek on the potential position change.  "He is going to have to adjust to play the three and at his size maybe even playing some two on some of the bigger twos in the league.  I think he's got the capability, strength and body type for it."

Robinson's creation in a half court setting mainly consisted of straight line drives because of average ball handling skills.  If he couldn't get to the rim on a consistent basis against slower footed fours, how is he going to be able to beat more athletic, quick-footed wings with the bounce in the NBA?

This is a potential detrimental flaw in his skill set for the ability to grow into anything more than a complementary piece.

Robinson also had a higher turnover percentage than assist percentage in both years with the Wolverines.  When the shot isn't going right the easiest way to maintain usefulness on the offensive end is with off ball movement and high-level passing.  The off-ball movement shouldn't be an issue, but his floor vision isn't where it needs to be.

This is before even getting into the issues on the defensive end.

In a question I asked Suns GM Ryan McDonough about Robinson's poor numbers in these areas he made a salient point.

"It's where knowing the system is important," explained McDonough.  "Michigan I think had the fewest fouls in the country or they were among the bottom.  That's John Beilein's system, he's had a lot of success with it."

"They play position defense, don't gamble a lot for steals, try to stay out of foul trouble, try to keep the game moving by not stopping the clock with turnovers or fouls so you have to factor that in.  He looked fine out here today in terms of how he moved his feet and guarded on the perimeter."

Michigan's opponents' free throw to field goal attempt was .195, third best in the country.  It's steal and block rate both ranked in the 300s.  It's logical in a more aggressive scheme Robinson's steal and block numbers could see a significant bump (especially steals).

Where I can't buy McDonough's angle is with the rebounding.  The Wolverines were an average to poor defensive rebounding team and that wasn't by design.  They played to the 338th ranked pace in the country.  It wasn't their goal to leak out and create fast break opportunities.  Michigan's flaw in this area was because the players on the court did a poor job closing out possessions.

Because the Wolverines were usually a plus in the turnover and 3-point category they were able to get around this weakness.  When they lost it was often because the other team grabbed so many offensive rebounds it was impossible to overcome.

In Michigan's Elite Eight loss to Kentucky during this past season's March Madness the Wildcats grabbed 62.5% of their misses.  Robinson had three defensive rebounds.

In Michigan's national championship loss to Louisville the season before the Cardinals grabbed 45.5% of their misses.  Robinson had one defensive rebound.

With his size, strength and leaping ability, "GR3" should be a significantly better defensive rebounder.

Whether Glenn Robinson III can use his physical gifts and skills to develop his flaws will decide if he can handle a bigger role in the NBA than people like myself expect.