The Suns have officially entered the LeBron James sweepstakes, but the unfortunate reality is that only one team can land his talents... which will result in a mass initiation of "Plan B" across the league.

Share All sharing options for: Phoenix Suns face lots of "Plan B" competition in free agency

In the event of a post-apocalyptic world that doesn't include LeBron James being reborn as a Phoenix... the Suns are going to need one.

Please don't stop reading. I know that I'm probably wasting both of our time, because why wouldn't James want a ride on the Orange Express, but prudence dictates resiliency. After all, what kind of fiduciary would McMiracle be if he wasn't ridiculously prepared for all possible eventualities?

Does he really seem like the type of ninja to get smoke screened? That's what I thought.

We all know Plan A is a reach for the stars, but Plan B is fraught with pitfalls as well.

Without trying to be too much of a stormy petrel here are a few of them... 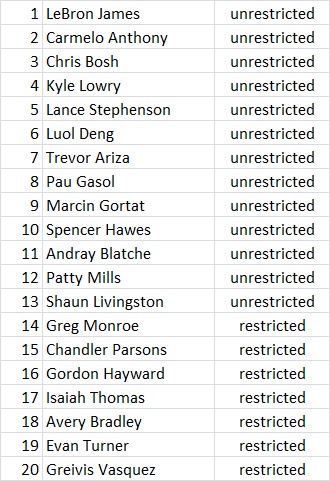 Here's a list of 20 of the top free agents. I'm not suggesting that these are necessarily the top 20, I didn't put them in order and I didn't list our own. A comprehensively ranked list can be found elsewhere... that's a different article. From perusing the full list of agents about to be freed in the coming days, though, it starts to thin out quite a bit after this.

While Phoenix is making a play at LeBron, isn't it just as likely (or moreso) that Miami is able to get James, Wade and Bosh to sign back up at a discount ($40 million combined) so they can add a couple players like Lowry and Gasol (for around $20 million combined).  Really, who knows?

Another scenario that sees LeBron leave Miami, let's pretend for Cleveland, suddenly makes the Heat big spenders. They would suddenly have $40 million+ available and need to refill a roster.

The Lakers could look like a pretty good option for Luol Deng.

There are lots of other scenarios. What starts out as a relative paucity of players could dwindle fairly quickly.

The Plan A competition consists of (at least) the Miami Heat, Chicago Bulls, Houston Rockets, Cleveland Cavaliers, Los Angeles Lakers, and Dallas Mavericks. You could even add teams like the Golden St. Warriors if the pursuit of Kevin Love is considered more like 2A than B.

As soon as LeBron makes his intentions clear it will be like a reset of free agency. What this means is these remaining teams will be scurrying around to implement their own backup plans when their initial pursuit is fruitless.

The Suns will have their work cut out for them recruiting against this group (again).

Suns have money to burn

The Suns have $17 million on day 1 of free agency, unless they renounce free agents.

By renouncing Bledsoe, Frye, Tucker and releasing the last three guys on the roster, they could have up to $36.4 million available.

Money to Burn - in addition to the Suns 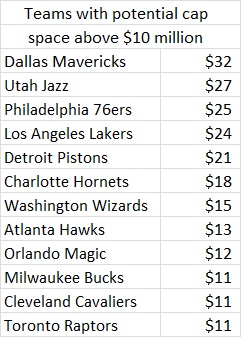 The list above shows teams with a realistic ability to get at least $10 million below the $63.2 million salary cap. The workings of the CBA are quite esoteric, so these numbers are just rough figures and many of them would require specific, and in some cases difficult, action by the teams to achieve. The Jazz, for instance, would have to renounce Gordon Hayward to get to $27 million, but even without that they could be around $18 million. Giving the exact details of each team's cap situation would require a separate article for each team.

Besides the Suns there are 12 other teams with the ability to clear over $10 million in cap space to strike in free agency.  This isn't even representative of the exact level of competition, though, with teams such as the Houston Rockets shedding salary to enter the fray and the potential cap situation of the Heat.

Here's another potential problem. While the Suns and others are preoccupied, teams like the Pistons, with recent coaching addition Stan Van Gundy, and Bobcats, who will be looking to improve after last season's playoff appearance, will be looking to plunder some of the lower profile players.

It makes sense for these teams to strike while the iron is hot and lure away free agents before they are approached by potentially better destinations.

There are always the reaches, too, where a small to mid market overpays to bring in a player and offset other intangibles with financial compensation.

And who the hell knows what the Philadelphia 76ers are thinking...

Although many of us are rooting for wanderlust, a lot of these guys will stay put... which may very well include LeBron James.

Just because players have become free agents doesn't mean that they are disenfranchised with their current situations. Eric Bledsoe, P.J. Tucker and Channing Frye are all free agents, but I don't think they are all itching to leave Phoenix. Free agency is just a very normal part of the way business is conducted in the NBA and a process which is used all the time in negotiations where teams re-sign their players.

Even if it takes going down to plan Q13 I'm sure the Suns have prepared for this period as well as possible. Don't forget that free agents are only a portion of what makes free agency such an exciting and pivotal time.

I would be highly surprised if the Suns don't make some kind of trade in the coming days. With the unpredictable, but overwhelmingly positive, results this front office has yielded there is likely something completely off the radar that is on the back burner.

And enjoy this. This time is very exciting and entertaining. After all, isn't that a big part of why we are fans?