While the Suns are loaded at point guard, they appear to want to add to the treasure trove with yet another one, Sacramento's Isaiah Thomas.

The Phoenix Suns are hosting free agent PG Isaiah Thomas for a second day in a row today, trying to entice him to sign with the Suns before getting offers from teams who will guarantee him a starting spot but maybe for a losing team.

Thomas, at 5'9" the smallest player in the league at the moment, is a restricted free agent whose asking price is likely around $8 million per year. Backup PG Greivis Vasquez just signed for $6 million per year this week to back up Kyle Lowry in Toronto. Vasquez couldn't beat out Thomas in Sacramento before moving to Toronto in the Rudy Gay trade.

Thomas reportedly wants a starting position, while in Phoenix he would clearly be committing to coming off the bench as a sixth man spark plug. 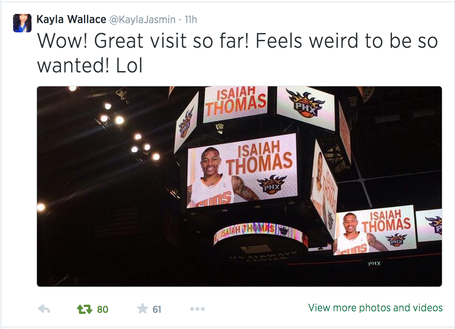 But the dalliance with yet another point guard while still holding the rights to Eric Bledsoe, Goran Dragic and Tyler Ennis has Suns fans a little on edge.

The Phoenix Suns franchise has never been known as a defensive juggernaut. My hope was that the new GM, who'd made a name for himself by advocating for defensive wizards Avery Bradley and Rajon Rondo, would bring a defensive fire to the team.

After an encouraging first offseason of acquiring a defensive coach and a handful of young players who can play hard at both ends of the court - Archie Goodwin, Alex Len, Miles Plumlee, Eric Bledsoe - the Suns appear to have jumped back in the other direction in 2014.

Players who have - publicly, anyway - visited the Suns during free agency are Spencer Hawes and now Isaiah Thomas. Neither has the right to hang their their jersey on the defensive coat rack. In the draft, the Suns passed on the likes of two-way player Gary Harris for offensive-minded F T.J. Warren and PG Tyler Ennis.

Yet, we need to remember that the Suns were still just 8th in offense (points per possession) and to make the playoffs they will need more offensive production up and down the line and in more versatile ways.

This is beginning to get a little comical. GM Ryan McDonough made his rep in Boston for identifying undervalued talent. He talked the team into trading into the first round for Rajon Rondo, and then was the biggest proponent for drafting Avery Bradley. Both were defense-oriented point guards in college who were undervalued because they couldn't shoot straight.

In recent years, he was part of a Boston front office that coveted two-way guard Eric Bledsoe, to the extent that the Celtics considered a trade of Garnett and/or Pierce to the Clippers on their downslide with Bledsoe being a centerpiece in return along with DeAndre Jordan.

When McDonough took over the Suns, he drafted an undervalued two-way PG in Archie Goodwin, who profiled just like Rondo and Bradley, and then actually acquired Bledsoe.

When Bledsoe was acquired, national and local media and fans assumed a Dragic trade was on the horizon. It wasn't. The Suns wanted to play Dragic and Bledsoe together, and proceeded to go 23-11 in 44 games with those two in the starting lineup. Unfortunately, the season is 82 games long. Injuries kept the Suns out of the playoffs.

Since the season ended, the Suns have been inundated with point guard questions. First, rumors surfaced that the Suns were looking into sign-and-trade opportunities with Bledsoe. Then, the Suns were linked to Sacramento Kings PG Isaiah Thomas. Then, the Suns eschewed a two-way shooting guard (Harris) for a rising PG Tyler Ennis.

And now, the Suns appear intent on signing Isaiah Thomas after all, with no stated intent to move Bledsoe or Dragic or Ennis.

Let's pull a (not so) random stat out of last season.

If you want to see the Suns make the playoffs next year, it makes sense to sign a proven backup PG who will likely play starters minutes over the course of the season. Tyler Ennis will eventually be very good, but is he a starters-minutes backup PG for a playoff team in 2014-15?

Really, when you consider that Dragic and Bledsoe are the equivalent of one PG and one SG, it becomes more obvious that the Suns need a quality backup PG.

I think most of us agree that if Eric Bledsoe and Goran Dragic are worth $10+ million/year in today's market, then Isaiah Thomas is worth at least $8 million per year. Thomas produces nearly identical offensive stats, but loses a bit of ground due to his paucity of defensive chops.

So, yes, Isaiah Thomas is nearly as good as Eric Bledsoe and Goran Dragic, and yes he is worth $8 million per year or more.

And yes, the Suns can use the help.

The Suns can easily afford to supplement their second unit with a proven player. With the departure of Channing Frye, the Suns have $27 million to spend even with Tucker and Bledsoe's cap holds. Tucker agreed to a new deal yesterday, and even that would hardly dent the cap space.

The Suns need another proven guard, and they need a quality power forward. Plenty of money exists to fill those holes. It would be in the Suns best financial interest to front-load a contract, but the CBA only allows a 15% bump in the first year as a bonus.

It doesn't appear that Sacramento wants to match any offer over the new Collison deal ($5.3 million - the MLE) so the Suns likely don't need to do anything fancy to get the guy.

The impact on the future

This doesn't mean there's no room for Bledsoe and Dragic on the team, at least in 2014-15. When Dragic, Bledsoe and Thomas are making a combined $35-40 million in 2015-16, that's another story. But this year, it's completely doable and preferable to have all three to make the playoffs.

And no, this doesn't mean the Suns can't groom Tyler Ennis, or that there's no room for Archie Goodwin. Ennis and Goodwin are both still 19 years old till next month. They will get their turn when someone gets hurt, just as Smith and Barbosa did last year. There will be chances.

And no, we don't need to worry about the summer of 2015 yet. There's 12 months between now and the summer of 2015, by which time an unknown number of things can happen to the Suns that will shape their next move.

In a microscope, the Suns can really use a proven sparkplug off the bench that can easily slip into the starting lineup without the Suns losing anything.