Isaiah Thomas has always been overlooked. Now in Phoenix, he will be center stage as an electric player off the bench for likely a playoff team.

Today, once the Suns complete the trade call with the Kings and the league, Isaiah Thomas will be a Phoenix Sun. He comes to the Suns expecting to be the third guard, behind starters Goran Dragic and Eric Bledsoe.

Check out the fact that he's already in a Phoenix road uni in his twitter profile. His facebook page also has Phoenix Suns all over it already. Give the man some love, Suns fans!

Dragic and Bledsoe are bigger and can defend better (Bledsoe to the extreme on this end), but Thomas is the more accomplished true scorer. And he doesn't lack for confidence.

"If I was 6-foot, I would be signing for $90 million contract, just like [Kyrie Irving]," Thomas told Slam Online last week. "I'm 5-foot-9 and that's why I was the 60th pick. That's why the Kings keep bringing new guys in. That's the reason why. And I understand and you can't put it past that. If I was 6-foot, I would be a max player. I think a lot of people feel that way, too."

Truly, Irving is a more talented player than Isaiah Thomas, not just bigger. But is he twice as talented? That's where the opportunity becomes exciting.

Phoenix Suns GM Ryan McDonough always talks about identifying undervalued players for acquisition. He's not about overpaying for talent. Yesterday, the Suns agreed to pay Thomas just under $7 million per year for the next four guaranteed years (no options).

"We welcome Isaiah Thomas," said President of Basketball Operations Lon Babby in the official press release today. "His addition to our backcourt makes it one of the deepest and most dynamic in the league. We have enjoyed getting to know him during his visit to Phoenix this week. He will quickly become a fan-favorite."

"Isaiah is one of the most dynamic scorers and playmakers in the NBA," said General Manager Ryan McDonough in the official press release today. "I have always admired his competitive spirit and his love for the game. He will be a great fit for our up-tempo attack and he will help solidify what we believe is the best backcourt in the league."

If Thomas is that good, why would he want to join the Suns just to be a backup?

"I'm going to just continue working hard, continue to be me, and hopefully a real good team wants me on their team and I can go there."

As an undersized player, Isaiah Thomas was always overlooked.

He was not recruited heavily to college, but then succeeded in becoming one of the nation's best scoring playmakers at Washington. Yet after proving himself all four years in college, he was barely drafted to the NBA - taken with the very last pick of the 2011 draft.

In the NBA, he was immediately placed behind the 10th overall pick Jimmer Fredette on the rookie depth chart. But the diminutive Thomas ended up playing the 5th most minutes on the team as a rookie, starting 37 of 65 games in a strike-shortened season. He was 4th in scoring (11.8), 2nd in assists (4.1) and 1st in 3P% (37.9%). He even had a 3:1 assist/turnover ratio, making him an efficient option running the point.

The next year, Thomas was the starting point guard for 62 of his 79 games. He was flanked by erstwhile ball handlers ball hoggers John Salmons and Tyreke Evans, but led the team in assists (4.1) and was 3rd in points (13.9).

As a reward for his good play, the Kings benched Thomas. They traded Evans that offseason for point guard Grievis Vasquez who had just finished a breakout second season with the Hornets (13.9 points, 9.0 assists per game).

"It hurt," Thomas said to Slam Online last week of the Vasquez acquisition. "But at the same time that's been my story my whole life. People have doubted me, people always bring guys in who they think are going to outplay me or outwork me and that's just not the case. I'm going to just continue working hard, continue to be me, and hopefully a real good team wants me on their team and I can go there."

But Thomas beat out Vasquez for the starting position, and Vasquez was eventually traded to Toronto in the Rudy Gay deal.

"Thomas is much better than Greivis Vasquez and earned the starting spot fair and square," SactownRoyalty.com editor Aykis shared via email to me last night. "Vasquez wasn't terrible, but the Kings offense proved to be much more efficient with Thomas on the floor than Vasquez and so did the defense. There were only two players last season that made the Kings better offensively and defensively according to Basketball-Reference's On-Off stats and they were DeMarcus Cousins and Isaiah Thomas." 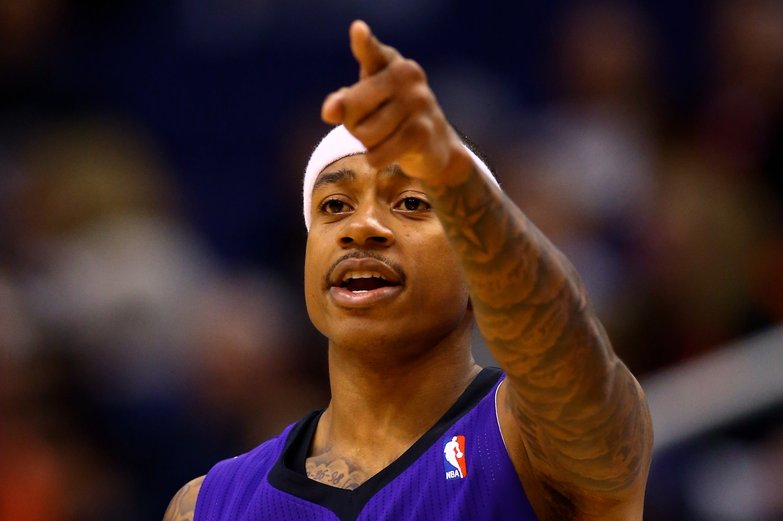 Vasquez played well in Toronto as they bull dozed to 3rd in the East. He just signed a new contract with Toronto for $13 million for 2 years ($6.5 million per year) to back up starter Kyle Lowry ($12 million per year). Toronto's other starting guard, DeMar DeRozan, makes more than $11 million per year. So, Toronto's top three guards will make about $30 million between them.

In 18 games as a reserve, while Vasquez started, Thomas threw up 17.8 points and 4.9 assists per game in only 27.7 minutes. Damn. That's production right there, folks. Meet your new 6th man.

"Isaiah Thomas is one of the best scorers in the league," Aykis said. "That is not stretching the truth. In just his first three years in the league, Thomas has proven that he can score on anyone and everyone. His size is not a disadvantage here. He gets to the bucket easily and finishes very well. He's got some of the best hesitation moves and is an excellent stop and pop shooter from mid-range to the three point line. He has the ability to take over games; In one game against the Thunder in which the Kings were being blown out, he scored 21 points in the fourth quarter alone, singlehandedly bringing the Kings back."

So, why would Sacramento want to get rid of Thomas?

Of course, Thomas has his flaws. On offense, he can take bad shots and on defense he just doesn't have the size to compete against the bigger opposing guards.

"As for weaknesses, Thomas is sometimes too aggressive," Aykis said. "He jacks up shots that most players wouldn't dare to take (the catch being that he also makes more of those shots than most players would) and he tends to overdribble. His distribution skills are not bad, especially for a score-first point guard, but they also aren't elite. Passing will always be Plan B for him.

"Defensively, Thomas isn't great, but it's not for lack of effort. At times he can be a pest, but his lack of size makes him especially bad when helping or trying to chase spot-up shooters."

Despite adding a renowned defensive coach in Mike Malone, the Kings were still just 23rd in defensive efficiency last season. This was a stop up from being 30th and 29th in the prior two seasons, but still pretty bad.

But Thomas is a great asset, and that goes way beyond the basketball court. His fans will miss him greatly.

"Honestly, this is what is perplexing Kings fans the most," Aykis said. "Thomas was a fan favorite, both for his on-court ability and his off-court persona. It's possible that the new management is trying to make this their team and clean house, but to cut ties with one of the only good assets they had makes little sense to me.

"The truth of the matter is that it came down to vision and money; The Kings did not see Isaiah Thomas as a starting point guard and as such didn't want to pay him starting point guard money. In their eyes they could get a quality guy in Darren Collison for less money to replace much of the value they lost in Thomas. That remains to be seen but all the evidence suggests that Thomas is a much better player than Collison."

And as far as the price, the Suns are paying - $27 million over 4 years, with reportedly declining salaries in future years as the Suns inch closer and closer to that luxury tax line - Aykis has some input on that as well.

"I think it's a perfect price for Thomas," Aykis said. "Should his production remain similar, he's fantastic value to contract and a great overall asset for the Suns."

What to expect from Thomas

"Thomas's best role is that of a scorer," Aykis said. "That's why so many consider him to be a 6th man type. He is good enough to be a starter in my opinion, but the Suns already have two amazing guards in Goran Dragic and Eric Bledsoe (assuming they bring back Bledsoe). If you need points, putting in Isaiah Thomas will help you out. If you need energy, Isaiah Thomas will help you out."

Thomas is super-personable, and offers great energy with a chip on his shoulder. He will always give you great effort and scoring.

Let me repeat that earlier stat of Thomas coming off the bench last season. 17.8 points and 4.9 assists in 27.7 minutes per game as a reserve.

But is he easy to root for? Let's ask Aykis.

"I just want to say that Phoenix Suns fans are getting one of the easiest guys in the NBA to root for. Thomas is a guy that works his butt off, never gives up, never says never, and will never quit. We will miss him in Sacramento and I think it's very possible that the Kings will regret their decision to not bring him back."

Not only is this a huge value deal for the Suns, it signals that the Suns are not taking next year lightly. The Suns want to win and win big, and one way to do that is to have an elite scoring guard off the bench.

The Clippers have Jamal Crawford. The Thunder used to have James Harden.

And now the Suns have Isaiah Thomas.

Check out this free agent scouting video from Draft Express. Mike Schmitz kills it with these things. If you're not convinced about Isaiah Thomas yet, watch this to see his strengths and weaknesses, replete with video evidence of it all.