Summer Suns shaky in start but it's all good

Even more thoughts about the Phoenix Suns Vegas Summer League debut with quotes from coach and players.

Share All sharing options for: Summer Suns shaky in start but it's all good

Guys, I'm not going to share a lot of my thoughts or observations on the Summer Suns first game. Mostly because Kellan already did a great job of that and also because my eyes are out of practice watching live basketball. So, while I might be at the Steve Nash Declining Skills part of my career as a writer, I can still deliver the fundamentals...like transcribing quotes.

Here's words that came out of the mouths of people you are likely interested in talking after the Suns loss to the Warriors:

"I do feel like he looked good. He looked more comfortable. There's good things ahead for him."

"He played much better as the game went on which is good. Defensively, I might have let (Curry) go a little bit too long so then the minutes got a little bit messed up and I probably should have played them both together at the end so that's on me."

"I think there's some positives in him. He's good. He's a leader. Knows how to play offensively, advances the ball. Pick and roll game is good and then defensively he's just going to have to keep going through experiences to get better."

"I'm trying to get some stuff for him in the half court but I think our best offense right now is when we just get out and go but we've got to be disciplined and get our spots and get there quickly and be more precise. I thought that's where we struggled."

"This was our first game. They had an advantage, they played last night. But there's no excuses. What happened tonight I kind of expected. Little jitters and execution wasn't as crisp or sharp. But hopefully like I told these guys, this is the NBA now we get to play again tomorrow. We'll clean it up. We'll watching film. We'll walk-through tomorrow and then we'll go from there."

"I told him at halftime, he was wide open and I'll take them. He's a 40 percent three-point shooter, I'll roll with that anyday. He could have been, it's his first game, now it's out of his system. We come back tomorrow and then we'll see what happens."

"Real, real aggressive (during the third quarter). He was good. He got out and ran the floor which is what I think we're going to need to do here in summer league...

Little bit undisciplined defensively and it cost us and he didn't block out a couple of time and they got second shots. Once again, this is more playing experience for him to get better. He's got to put it together and play both sides of the floor and you know, he'll get it. This is what it's all about. This is what (summer league) is for."

On his own coaching performance.

"I think the one thing I'm kicking myself on is that I probably should have let them play a little bit more...Seth (Curry) just came and joined the team so I was trying to keep it simple but that's what was tough for me personally. I think we'll get better. The guys will have a better flow."

"In this league every team is going to have point guards you have to compete with. I'm fortunate that Phoenix is a team that plays two point guards at one time."

Ennis on transition from zone to man defense.

"The main thing is different calls. Different teams call screens different things. Just things like that. As time goes on I'll be able to catch on a little bit more."

"I was anxious to get out there and be part of the team. Unfortunately, we didn't get the win but it was good to get the first one out of the way.

Yeah, I was nervous but as I got going up and down I started to calm down a little bit.

It's just thinking too much right now. I've got to calm down and relax and react to those guys and have fun."

I'm sorry that's all I have for you this time. I'm confident with a few more games I'll be able to shake off the rust and execute with more precision and crispness. In my VAST experience that's how Vegas Summer League works. First games are the worst and then things get better as the nerves ease and the team gets a bit more comfortable. By the third and fourth games it clicks and then boredom sets in and the "vets" stop playing hard for the fifth game. #patterns

Meanwhile, I got to hang out with my old buddy Mike Lisboa who was wearing these awesome kicks you see below. 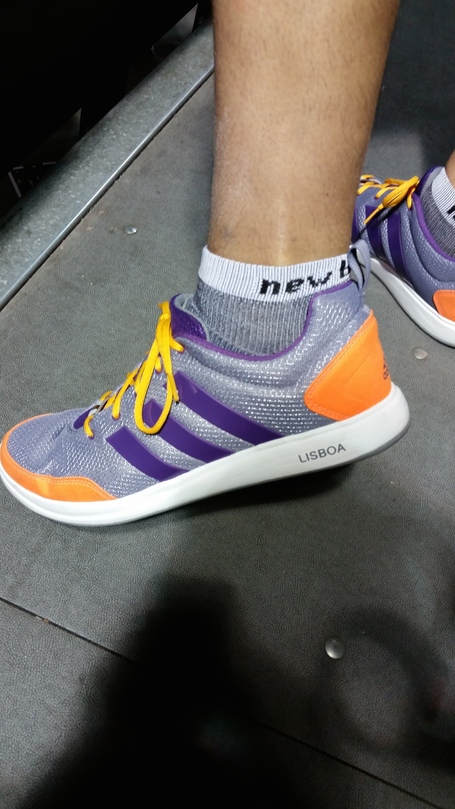