The Phoenix Suns' summer league record falls to 2-2 as their hopes for a July championship are dashed by the massive inside presence of the Minnesota Timberwolves.

Share All sharing options for: Suns Can't Stand Up to Massive Timberwolves, fall 86-77

Well folks, that's pretty much all she wrote. If you were banking on this Summer Suns roster coming to Vegas and winning a 'chip you will have to now find somewhere else to place your hopes. Perhaps you can hope for a sub-105 degree day next Tuesday or for your favorite beer to be on sale at your local store.

As long as you keep hoping for things that have little consequence, life will be good for you. I promise.

Despite the loss, T.J. Warren has solidified his spot in Suns summer league immortality and more importantly a place in the HOPEFUL hearts of all Suns fans. He finished this game with 26 points on 11-18 shooting which puts him at an incredible 34-57 (.596) over four games. WOW.

Warren had to sit out the last half of the fourth quarter after he picked up his fifth foul.

In the summer league, "regular season" players get 10 fouls but that reverts to the normal six-foul limit in the new tournament format. A fact your trusty reporter wasn't aware of... until today.

Coach Mike Longabardi would have brought Warren back late but the team was making a run and he wanted more shooters on the floor with his two point guard lineup.

"He (Warren) played great again, offensively," Longabardi said to very small group of reporters after the game. "He scored like he normally did in transition but we ran some halfcourt plays for him and he executed and that was good."

Not that results in Vegas matter (outside the casinos, clubs, and buffet lines), but the loss was attributed by Longabardi to the lack of size to match up with the Timberwolves "twin towers" of Gorgui Dieng and NBA vet/accomplished maker of funny facial expressions, Kyrylo Fresenko.

"I feel pretty good (about how summer league is going overall). I thought maybe today a guy like Tyler (Ennis), maybe fatigue set in a little bit. We had four games in five nights. That happens. But that's where it's great for him to go through this experience now so when we get to the regular season he can help," said Longabardi.

With the loss the Suns are now in the losers' bracket and will play their final summer league game of 2014 at 1 PM on Friday against Gal Mekel's Dallas Mavericks.

Fortunately for us all, Dave King will be on-hand to provide a much better recap of that game.

There wasn't a good photo that fit the story so I found two I really liked. I used one up top because it is prettier but couldn't let this one disappear without sharing it. 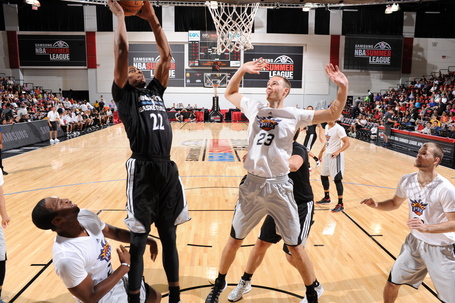