The Phoenix Suns have gotten deeper in talent but still have not added any top-end talent to a team in need of it to ascend solidly into the playoff picture in 2014-15.

Since the end of the season, the 48-34 Phoenix Suns have added four players while subtracting two, making a deep team that much deeper. But despite the noise, the Suns have yet to make the big splash they wanted to make.

In are SF T.J. Warren (rookie), PG Tyler Ennis (rookie), PG Isaiah Thomas (4 years, $27 million) and PF Anthony Tolliver (2 years, $6 million). Out are PF/C Channing Frye and PG Ish Smith. So far, the Suns have retained one of their free agents (P.J. Tucker) while still waiting on another (Eric Bledsoe).

The Phoenix Suns now have either signed contracts or commitments to sign 15 players for the 2014-15 season (including Bledsoe), yet still have anywhere from $13.5 to $16.3 million of spendable room under the NBA's salary cap depending on when Tucker signs his contract.

But will they spend that money?

Take a look at the Suns current depth chart.

As you can see, there are no obvious holes in the Suns lineup. Missing from last year's 48-win team is Channing Frye, but Isaiah Thomas and Anthony Tolliver have been added to improve the Suns' depth.

At this point, the Suns should only sign obvious bargains (assets) at the PF or C spots, but otherwise there is nothing left on the market worth signing to spend that $13+ million.

Available free agents (not including Bledsoe)

I am excluding point guards and combo guards from this list, since the Suns seem to have enough of them once Bledsoe is re-signed.

This is called the "slim pickings" portion of the free agency show.

As free agency winds down, teams see what's left after the carnage and start to fill holes by swapping depth to fill weaknesses. After this time last year, the Suns executed three more trades to replace two starters (Luis Scola, Marcin Gortat) with two new ones (Miles Plumlee, Gerald Green) while acquiring two draft picks as well (Tyler Ennis, Bogdan Bogdanovic). Also swapped were one rotation player (Caron Butler) for another (Ish Smith). In the process, the Suns got younger and more talented.

This year, the Suns are no longer in the business of trading veterans for youth and picks. The Suns are now on the other side of the coin, looking to acquire big time talent. It's possible that McDonough will swap youth for youth this summer, but more likely he will focus on getting a big name for a bunch of little names.

The Suns have high-end future at four positions - PG, PG2, SF and C - but could stand to improve at the PF position long term.

Kevin Love is the primary target, but don't be surprised to hear the Suns acquire someone totally off the radar as a talent upgrade at the PF position. 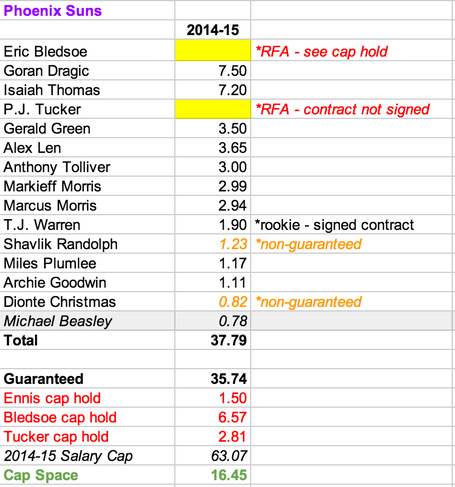 Eric Bledsoe is still "on the market" while his agent tries to pry a bigger offer from another team than the Suns are currently offering. The Suns are in the driver's seat though, just waiting for this game to play out.

No team has max cap money left except for Philadelphia, who likely have no interest in giving Bledsoe a mini-max deal while they rebuild. Remaining teams, such as Milwaukee, can only go as high as about $11 million to write an offer sheet, which the Suns would love to match.

It's in the Suns' best interest to pay less than mini-max ($14.7 million to start) on a new deal, considering Goran Dragic is unrestricted next summer (assuming he opts out of his $7.5 million contract for 2015-16) and will want at least as much as Bledsoe.

The Suns shrewdly signed Isaiah Thomas last week to a deal that pays him (a) less than Dragic this year and (b) about half of what Bledsoe is asking for. Not only is Thomas insurance in case one of Bledsoe or Dragic leave, Thomas allows the Suns to argue down each of those players' asking price.

Thomas produced nearly identical numbers to Dragic and Bledsoe, so his salary (and Kyle Lowry's $12 million) are good "less than max" comps for the Suns' other two point guards.

A week ago, the Suns were on the verge of having to sign Bledsoe for $14.7 million to start, putting that as Dragic's floor next summer. Now, the Suns can possibly sign Bledsoe for $11-12 million per year and keep Dragic for about that price next year. Much more palatable. Have I said yet that the Suns are shrewd?

Why the variance between $13+ million and $16+ million available in cap space? Because the Suns have yet to sign P.J. Tucker to his new $16+ million contract, so his cap hold is still just $2.81 million. The Suns could conceivably spend the $16.3 million in free agency before going over the cap to ink Tucker using Bird Rights. His first year salary will fall somewhere between $5.5 and $6 million, once signed.

It is interesting to me that the Suns signed #14 overall pick T.J. Warren to his rookie contract and went out of their way to remove the cap hold for Bogdan Bogdanovic (who is playing overseas), but have not yet signed #18 pick Tyler Ennis.

Rookie contracts are pre-determined, with only a potential variance of 20% in either direction. Nearly every rookie contract is given at 120% of the slot, with the only exceptions generally being health-related but even those are rare.

So why not sign Ennis yet? Once a rookie is signed, the team cannot trade them for 30 days. Before signing, the team can trade the player's rights without limitations.

This does not mean Ennis is out the door, but it does mean the Suns are willing to include him in a trade this month if necessary. They are really hedging their bets.

Who the heck knows? So far, the Suns have done very little compared to what they had hoped, so there's still work to be done.

Phoenix Suns GM Ryan McDonough and Basketball Operations President Lon Babby were clear in the season-ending press conference that Suns were looking to make changes this summer, because you cannot expect the team to have the same unexpectedly awesome results two years in a row. The Suns went for broke to get LeBron James and/or Chris Bosh but came up short, and in the process lost under-appreciated Channing Frye to an over-market deal (in my opinion) in Orlando.

Expect a trade or two you didn't expect, and maybe even one you did expect. The only players who cannot be traded are Tucker, Thomas and Tolliver (until December) and rookie Warren (until August).

And as you can see by the free agent list above, the Suns could sign some (roughly) equivalent players at league-minimum deals to replace any depth lost in a big trade.