Phoenix Suns Free Agency: Scraping the Bottom of the Barrel

We've covered most of the big name free agents, but sometimes the success of a team's off-season isn't determined by the sexy signings but the value signings. Who might some of those values be this year?

Share All sharing options for: Phoenix Suns Free Agency: Scraping the Bottom of the Barrel

While most of us are hoping for a big splash in free agency this season (CarBron?  LeBrelo?  K-Lo?  K-Bron?), the historical odds are in many ways stacked against us in those endeavors.  While we have or will cover those big name free agents, it is also important to look for diamonds-in-the-rough.  Good off-seasons are as often defined by the value free agent signings a team makes as the big name signings.

The Suns find themselves with a relatively full roster, particularly at the guard positions after the Draft.  This story will focus on the three positions that seem most likely to have open roster positions: SF, PF and C.  This article is not connected to any actual rumors, but is just a brief mention of guys the team might be targeting or considering outside of the big names.

These bottom of the barrel players come in all shapes and sizes.  In particular, I focused on guys that fit 3 criteria:

2) Likely to sign a less than MLE level contract

3) Considered underachievers but flashed signs of talent beyond their performance

With those considerations out of the way, lets get to the players. 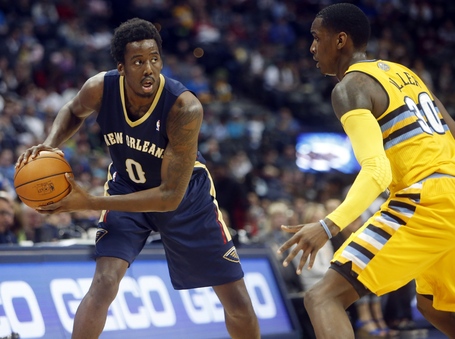 2013-14 Summary: Potentially the most well known player on this list, Aminu spent last season on the Hornets, where he saw his minutes decline slightly with the signing of Tyreke Evans.  Despite slightly less playing time, Aminu put up a practically identical season to the year before, with Per-36 Averages of 10.1 pts, 8.7 rbds, 2 assts and 1.5 stls on 47.4% shooting.  He graded out at .182 in the WP48 metric from boxscoregeeks, which puts him at 51st in that metric rating, just a few spots behind our own PJ Tucker.

Player Profile: Aminu has been something of a disappointment since coming into the league in 2010 out of Wake Forest.  He has never developed a consistent offensive game, and his shot from outside 15 feet is broken, though perhaps not irredeemable.  He works best cutting off the ball to the basket, but realistically he isn't a strong offensive option.  Aminu's real calling card comes defensively and on the boards.  At 6'9 with a huge 7'3 wingspan, Aminu has been a fairly dominant rebounding presence as a SF, and his length allows him to really impact opposing players' shots.  In 2013, he was the 6th best defender of the pick and roll in the NBA, surrendering only .55 points per possession in pick and roll scenarios.

Suns Fit: Aminu is something like a middle class man's PJ Tucker, but significantly younger at only 23.  A comparison might be useful on this point.

In many ways, Aminu resembles last season's PJ Tucker, with an even more underdeveloped 3 point shot.  While this is potentially troubling, there is reason to believe that Aminu might be able to salvage that shot, as he shot almost 32% in his first season in the league on a higher volume of shots per game.  Considering Aminu is likely to not command quite as high a salary as PJ and is 5 years younger, he may be a realistic alternative to the Suns' free agent fan favorite. 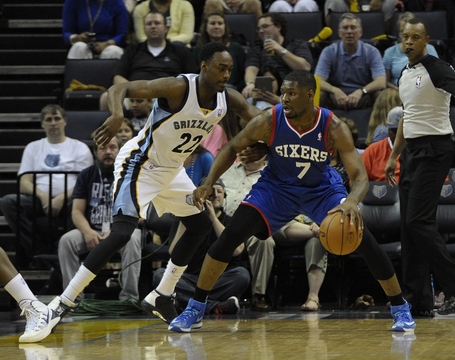 2013-14 Summary: After going undrafted, Thomas spent the majority of the season in the D-League, with short stints on the Magic and the Sixers that produced 37 minutes of game time.  In the D-League, Thomas put up very respectable numbers, but the D-League is always something of a crapshoot.

Player Profile: Thomas is a potential guy.  He came into college a highly recruited freshmen, and after underperforming his freshman year he returned, only to even farther underperform.  Thomas has the size and athleticism to play at this level for the most part, but the biggest questions about him from scouts were outside shooting and ball handling.  His shooting numbers in the D-League suggest he may have dealt with the shooting problems, but his ball handling still looks shaky, and his rebounding needs to improve.  He is still only 21, however.

Suns Fit: Thomas would potentially fill a Dionte Christmas like role for this team - he's a guy who could be brought onto the team, play in garbage time minutes and benefit from being on an actual NBA roster.  While he mostly dominated at the D-League level and might not benefit from another full season at that level, he is a guy who could go to the D-League on rotation with some of the other young roster guys when he is not active. 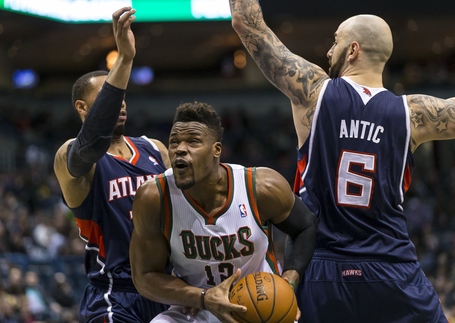 2013-14 Summary: Adrien emerged onto the NBA scene this season with a bang after 3 seasons of ho-hum level play.  What was different?  While Adrien had always provided defense, hustle and grittiness, he never really put anything together offensively, and as an undersized 4 without an outside shot, this proved difficult for him.  Last season, however, the offensive game came around: Per-36, Adrien averaged 13.5 pts and 11.5 rbds, as well as a block and a steal.  He also put up the 13th highest WP48 number of the last season, which speaks to his defensive chops and rebounding skills.

Player Profile: Adrien is an old school PF in a modern day SF's body.  At just a hair under 6'7, he relies on his athleticism, rebounding and grit to keep him in the league.  He's never going to wow with his offensive play, but he is legitimately impactful on the defensive end, particularly on the perimeter, and his rebounding far outstrips most other players at his position.

Suns Fit: If Channing Frye leaves, the Suns are going to need a backup at PF (unless they intend to play TJ Warren at that position).  While Adrien doesn't project as a replacement for Channing's offensive production, he might prove a good complement to a second unit featuring TJ Warren at SF - while the roster would be small, Adrien's defense focus and rebounding would counter Warren's deficiencies in that area.

2013-14 Summary: Jerrett spent 2013-14 in the D-League, where he put up respectable numbers, shooting 36.4% from deep and averaged 15 pts and 6 rbds per game.  Kelly, in contrast, spent most of his injury-limited season on the devastated Lakers, where he saw good playing time.  Kelly put in a decent performance, shooting 33.8% from 3 and contributing 8 pts and 3.7 rbds per game.

Player Profile: Both of these guys are young, prototypical stretch 4s.  Jerrett is the younger of the two (he just turned 20), while Kelly is more seasoned (23) and played in the pressure cooker at Duke for a full 4 years.  Both players have a legitimate outside shot, though the mechanics of Jerrett's shot are...unconventional.  Of the two, Kelly is the better all around player right now - he has a higher basketball IQ, and seems to better understand how to use his body to convert.  Jerrett, however, is likely a better long term prospect - he's a better athlete, younger, and possesses a little bit stronger of a frame (if a bit smaller).

Suns Fit: These two project as direct replacements for Channing Frye's skill set, but neither is likely to be able to step right in and fill in for Channing.  Both would provide an outside shooting touch and an ability to stretch the defense, something that is often necessary with the Suns' two-point guard style.  Of the two, Kelly would be the most likely to have an immediate impact.

2013-14 Summary: It was another developmental year for Vesely, who was traded midway through the season to the Denver Nuggets.  He played decently, showing improvement on the defensive end and as a rebounding presence.  His Per-36 stat-line of 9 pts, 9 rbds, 2.5 stls and 1.5 blks isn't flashy, but it does show signs of improvement

Player Profile: Widely considered one of the biggest busts in recent memory, I think Vesely was put in a position to fail in Washington.  When you compare the way he was used in Europe to in Washington, the mismanagement becomes more apparent: gone were his three point attempts (just gone; it isn't that he wasn't making them, he never took them) which, though they were inconsistent, forced European defenders to respect his shooting ability and cheat up, allowing him the chance to get past them.  Also gone were his cuts to the basket - in his last season in Europe, he was drawing between 5-7 FT per 40, while in Washington that number was down to 2.  I don't see Vesely developing as a great offensive power, but I think with proper management to help build up his offensive confidence, he provides a defensive presence (he had 1.4 DWS despite playing only 776 minutes) and a rebounding ability, in conjunction with a good amount of athleticism, that should allow him to find his way.

Suns Fit: This is a swing for the fences on a pitch-out type situation.  Vesely likely isn't on the radar for really anyone - the belief is he'll be heading back to Europe to rebuild his shattered psyche.  But there is a reason Vesely was a lottery selection - at just under 7 feet tall but with athleticism more comparable to a SF, he offers a unique set of physical skills.  Coached properly and managed correctly, Vesely could provide a rebounding presence off the bench that the second unit might need.

2013-14 Summary: Ayon put in another quiet but solid season with Atlanta.

He suffered an injury that limited him to just 26 games (in tandem with an unwillingness by the team to use him), and is considering returning to play in Europe.

Player Profile: Ayon is not a flashy player - he is the epitome of a bench player.  He doesn't have a dominant skillset, but is a fairly efficient scorer, a more than passable rebounder, a decent man to man defender and a willing and capable passer out of the high post.  At 28, Ayon is what he is - a reserve big man.  But he brings a unique amount of experience as the driving force behind the Mexican national team and a player who has played in Europe and bounced around the NBA for a few years.

Suns Fit: The Suns have a hole at the center position (SLAVA!!!!) that will likely be filled and should be filled.  The two guys currently on the roster have 3 NBA seasons between them.  Ayon would provide a veteran presence for the bench that might be lacking if we lose Tucker and/or Frye. 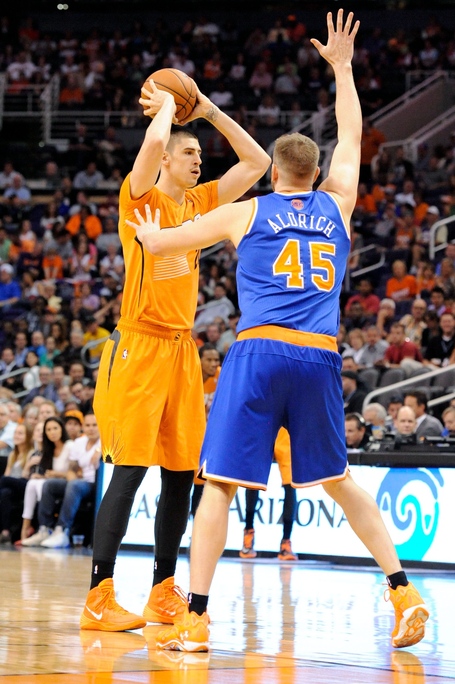 2013-14 Summary: Aldrich played for the Knicks last season, but only appeared in 46 games for a total of 333 minutes.  What stands out about Aldrich is that he performed significantly better towards the end of the season.  In fact, Aldrich produced back to back double-doubles in his last two games, and produced a double-double in every game he appeared in over 20 minutes.

Player Profile: Aldrich is, again, an underachiever.  A lottery pick, he's never played more than 400 minutes in a season.  This is particularly interesting because Aldrich has flashed signs of solid potential before.  A big body, Aldrich is a very solid rebounder, a low usage but decent efficiency finisher, and a respectable shot blocker.  At 25 and after 4 years in the league, he may have reached his potential, but he can offer a team a useful, and playable, third big off of the bench.

Suns Fit: This free agent gets the Bryan Gibberman seal of approval.  The team needs a third big, and Aldrich is going to be had on the cheap.  The Suns could do much worse than Aldrich off the bench - an undrafted free agent might not be ready to handle real playing time in worst case scenarios, but a more established player might chafe at being played behind Alex Len, who is likely going to struggle this season.  Aldrich is likely going to be glad to have a roster spot.