As we all expected, the Phoenix Suns are holding true to their word and are right now negotiating a new contract with Eric Bledsoe before he has to sign any offers from another team.

Just as they always said they would do, the Phoenix Suns are reportedly negotiating a new contract with restricted free agent Eric Bledsoe right now with the intention of signing him themselves rather than matching someone else's offer sheet.

Marc Spears of Yahoo! Sports was likely following up with Bledsoe's people on the report that the Milwaukee Bucks are considering an offer sheet to Bledsoe. If Bledsoe signed a Bucks offer in the coming days, that would put the Suns in a bind for cap room while trying to work their other deals.

This report from Spears matches what we've all been thinking, and it perfectly matches with what managing partner Robert Sarver, President Lon Babby and GM Ryan McDonough have been saying without exception for months. Since the beginning of the season, actually.

The Phoenix Suns have every intention of keeping Bledsoe in a Suns uniform. But with restricted free agency the way it is, the Suns don't want to - or have to - bid against themselves.

So it's a tight rope of letting Bledsoe test his contract demands on the open market while not letting "suitors" get so far as to wine and dine and make Bledsoe fall in love with them. The Pelicans, in 2012, let Eric Gordon get so far down the road of leaving that he embarrassed himself, his team and his fans with his pledge of allegiance to another team.

The Suns want to keep Bledsoe for a long time, but at the most reasonable price possible. It's a business. And if it's handled perfectly, everyone comes back next year happy with each other.

Bledsoe may still get a mini-max deal (roughly 4 years, $63 million) out of this, which he may or may not have been requesting since being acquired last summer. But if the Suns play it right, it would be the mini-max that other teams can offer (4 years, 4.5% raises) rather than the max the Suns could offer (5 years, 7.5% raises).

Either way, the Suns are winners if they keep the summer's best young free agent in the fold.

If the Suns can come to terms on a verbal agreement with Bledsoe, they only have to get his signature after everyone else has been signed/acquired. The Suns will keep Bledsoe's cap hold right there at $6.5 million as long as they need it to be.

Many have viewed the contract dynamic between Bledsoe and Dragic to be a major problem down the road, only exacerbated by the belief that they can't play (and win) together for a long time.

First of all, let's wash that second argument down the toilet. The otherwise under-talented Suns were 23-11 with Dragic and Bledsoe in the same starting lineup. That's even including the last two games where Dragic was playing on one leg. I'd say that's proof enough they can play together.

Next summer, Dragic can opt out of his contract to become a free agent. Clearly, he is underpaid in today's NBA versus what was once a market value contract. Dragic will want to be paid similar to Bledsoe, though the Dragon's asking price might be a little lower considering he is 5 years older than little Bron.

Can the Suns afford to spend $26-28 million per year on their starting back court? Many think not, but let's consider this tweet from Stu Jackson, who recently worked in the NBA front offices. 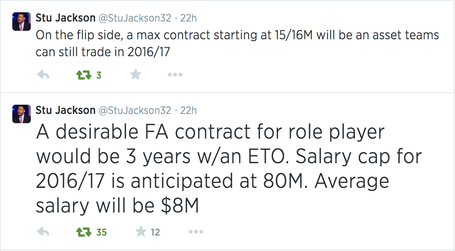 Whoa. In two years, the NBA's salary cap will rise by nearly $17 million over this current year, which is already nearly $5 million more than last year. And the average NBA salary will be $8 million per year.

So, let's ask a new pair of questions:

Can the Suns afford to re-sign Dragic next summer at his market rate (probably $12-14 million per year)? Yes. They have his Bird Rights. They will be able to give Dragic any contract they want to give.

Can the Suns afford, in future years, to have $28 million invested in two players who play the guard position? Well, if the cap is $80 million in 2016/17, the answer to that is a resounding YES. To give you a point of reference, that's the equivalent of having paid Dragic and Bledsoe $10 million each last year. YES. That is reasonable.