The Blueprint: How the Suns put the NBA on notice

A look at the Suns' escape from purgatory and return to relevance.

Share All sharing options for: The Blueprint: How the Suns put the NBA on notice

Two years ago we were clutching our binky and vomiting at the thought of Steve Nash in canary yellow. One year ago we were imagining Andrew Wiggins in a Suns jersey. Now the Suns' front office is allowing us to dream a lot bigger.

The rebuild has been fast-tracked by flawless execution of the early stages, but the last couple phases might prove the most difficult.

Part I: Draft Picks Are Good

It sounds simple, but it's a relatively new concept in Phoenix. From 2005 to 2010 the Suns saw the departure of star players Joe Johnson, Shawn Marion, Shaquille O'Neal and Amare Stoudemire. Of those four players, the Suns received only one first round pick that they actually ended up using -- Robin Lopez in 2009.

The change in philosophy began before McDonough, perhaps out of necessity, when Steve Nash was turned into four draft picks (two firsts, two seconds) from the Lakers. This facilitated the acquisition of future NBA legend Archie Goodwin and Alex Oriakhi, who was last seen in grainy video footage walking through the woods.

Perhaps the most valuable prize from the Nash trade has yet to come to fruition. The Lakers still owe the Suns another first-rounder, and being only top-five protected in 2015 there is a good chance it will yield a lottery pick for the Suns if the Lakers strike out in free agency and the Eastern Conference remains Eastern Conferency.

The 2014 draft delivered two first-round picks acquired from trades: Tyler Ennis and Bogdan Bogdanovich. This means that the Suns cultivated more draft prospects from Luis Scola and Marcin Gortat than they did from four All-NBA players.

To recap the draft pick hauls over last ten years:

The Scola trade with Indiana is already widely considered a complete and utter depantsing in the Suns favor by virtue of the breakout seasons delivered by Gerald Green and Miles Plumlee. Imagine if five years from now, Bogdan Bogdanovich -- the Suns' first real foray into drafting and stashing -- is even a solid rotation player. Talk about putting a cherry on the sundae.

And if Bogdan Bogdanovich is anything close to being a star player, the Pacers are never living this one down.

"Identity" is a common buzzword of front offices everywhere. While it is often not much more than PR jargon, it is nonetheless crucial for a team to establish an identity, and for that identity to be an attractive one. You don't want an identity like the Atlanta Hawks have had for the last 10 years, i.e. being identified by inconsequential playoff appearances.

These days if you're gonna be bad, be more than just bad. Be innovative in your sucktitude. Stock that roster with so much upside that your fans get vertigo. Play a different game -- one that the house hasn't rigged yet.

If you're gonna be bad, at least make sure they know your damn name.

When the S.S. Blanks capsized in 2013, the Suns finally stopped throwing their money into the crooked roulette wheel and drew up their own game. They invested in a new foundation instead of painting over the cracks. New duds, new coach, new roster, and a squeaky clean film-room nerd in the front office.

It's not about grasping for 8 seeds anymore. In this brave new world, Ish Smith and Slava Kravstov are preferred over paying Caron Butler $8 million for spot-up shooting and a veteran presence. Even without the baffling 48-win season the Suns just put together, the NBA is clearly a more interesting place than it was back when the nerds were still toiling away in their basements.

Despite all the hackneyed articles that have put Sam Hinkie and the 76ers' "controversial" rebuilding methods on blast, I'm sure I'm not the only one that can't wait to see what the finished product will look like in Philadelphia.

I'll tell you this much: If I was an NBA owner and had a choice between Hinkie and Billy King, I wouldn't need a great deal of time to work that one through my noodle.

When the Suns' rebuilding plan was fast-tracked by the brilliance of Jeff Hornacek and his wonderfully unorthodox backcourt, it was time to make a statement. There would be no laurels rested upon. This leads us to...

I can't help but feel a slight bit of pity for that poor envelope. Damn thing is in ruins by now. I knew Ryan McDonough had a good deal of fire in his belly, but damn. At least have some consideration for the envelope's little envelope children. God help any envelope unfortunate enough to find himself in pushing range of Ryan McDonough.

We know the feeling of being have-nots when free agency rolled around. The real free agency was for New York, Los Angeles, Chicago, the entire state of Texas, Boston, and Miami. For them, free agency was a champagne and cheesecake party on the P-Funk Mothership with Dr. Funkenstein himself bringing the house down while Burt Reynolds circa 1972 stood watch at the door, chewing a cigar and making certain that undesirables were promptly turned away. 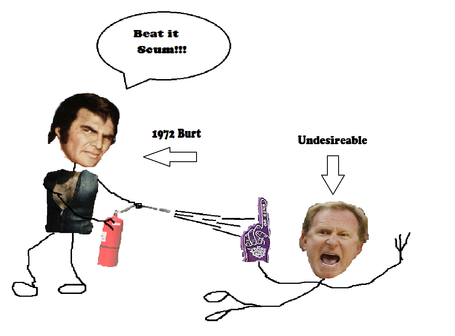 Not all the teams scored every time, but they were always there.

There on the glorious Mothership, drunkenly singing, "If you hear any noise, it's just me and the boys."

The rest of the NBA's free agency is more like a backyard barbecue. It's BYOB, and don't bother bringing any of the good stuff cause it'll be gone before you even get situated -- unless you get clever.

The best strategy is to score yourself a seat on top of the beer cooler. That way you can stick a Busch label on the craft beer and keep a close eye on it to make sure no one fishes it out, then have a good laugh when you're twice as drunk as everyone else but you haven't had to relieve yourself yet.

The food can be surprisingly good on rare occasions, but usually you regret what you ate almost immediately and it takes time to shed the extra weight you put on.

The Suns aren't wasting any more time sitting on the beer cooler. They're kicking 1972 Burt Reynolds squarely in the junk and laying siege on the Mothership.

How long it might take them to escape with the goods is anyone's guess, but from the looks of it they aren't planning on leaving anytime soon.

The game is on, the goal is obvious, and there's no point in mincing words.

This is where most teams trip over their own clumsy feet. Teams in less attractive locations spend early and freely to get the help they feel like they need. Many owners show a strong resistance towards rebuilding, and who can blame them? It's hard enough talking the fans into it, but imagine if that was your financial investment out there slogging it through 82 games of suck.

The result: average players on bad contracts, and teams that will pay well to snag an eighth seed in lieu of rebuilding.

This is how Drew Gooden and Landry Fields get multi-year deals.

Contrarily, teams that set their sights beyond eighth seeds use as much of their cap as possible on the following contract types:

Tier I: Star player contracts. The most agreeable of all necessary evils. Kevin Durant will make $20.1 million in 2014/15, and the Thunder are getting a bargain with that figure. They'll be in title contention yet again, and the most obvious reason for this is Kevin Durant. You really can't put a price on that.

Tier II: Veteran supersaver contracts. These are guys that have been around for a while and will play their role to perfection at a reasonable price. Birdman Andersen was paid $1.4 million last season and was one of the most efficient big men in the NBA due to a crystal-clear role that he excels at: protect the rim on defense and finish the pick-and-roll on offense.

Tier III: Rookies! These guys are like catnip for the McDonough and Hinkie types. Squeezing out as much production from young players as possible before the market inevitably spoils them with a bloated contract is how good investors get their rocks off. In 2014/15, Kawhi Leonard will make $2.8 million in the last year of his rookie contract. Rudy Gay, on the last year of his max contract, will make $19.3 million.

There will be times that signing players outside of these tiers is necessary to stay competitive. Tiago Splitter at 4 years, $36 million comes to mind. But stray too far from these three tiers and you're the Detroit Pistons.

Of course the Suns aren't the only ones that are hell-bent for leather. All they can do is improve the odds in their favor as much as possible, but there is no easy road. They aced the first three parts of the rebuild, now they have to reel in the enforcements and pull off some funky maneuvering with the cap.

Sellout crowds, sustained success, and deep playoff runs will be the spoils of victory.

The best part is, even if the Suns can't snag anyone from the P-Funk Mothership right away, the team still figures to improve organically with their bevy of young prospects ready to gnaw someone's leg off for a rotation spot. The script has been flipped on the big market giants -- the Lakers, Celtics and Knicks are all relying so heavily on scoring big in free agency that they probably won't even manage a playoff appearance without doing so.

Every team wants that star player, but it's much better to not have to rely on the whims of a free agent to build a successful franchise. The Slash Bros, Goodwin, Len, and the rest of the young guns are a hell of a consolation prize if they can't land a big fish this off-season.

Either way, buckle up.