Each summer, ESPN projects the top players at every position for the next season. It's good, clickable content to start conversations. But for some teams, it's a chance to lament the lack of respect people have for your team.

Share All sharing options for: Phoenix Suns rated low on talent yet again - one of only five teams not represented in ESPN Top 10 by Position

Those are the only five teams that failed to get a single player ranked in the Top 10 at his position - in terms of projected Wins Above Replacement Player (WARP) - this week by ESPN's Bradford Doolittle.

That's it. And three of those, Nets and Lakers and Celtics, are only off the Top 10 list due to injuries to Brook Lopez, Kobe Bryant and Rajon Rondo, respectively.

The other two - Suns and Sixers - have no such injury excuse.

That means 28 of the other 29 NBA teams have at least one player on their roster who is a bigger difference-maker, when healthy, than anyone on the Suns roster. Thank you, Philadelphia!

Likely, it's not that simple. The point guard position is incredi-deep while the shooting guard position has the aging Dwyane Wade at #2 overall and Dion Waiters at #5, for example. The Suns trio of Goran Dragic, Eric Bledsoe and Isaiah Thomas all made the "honorable mention" list at point guard, so at least they are in the top-20 discussion at the PG position.

But still. Not one Top 10 player at ANY position.

Here's an even bigger eye-opener: Outside of the Slash Triplets, not one Suns player even made the "Top 15" at his position according to these projections. That covers shooting guard, small forward, power forward and center. Remember, there's only 30 teams in this league.

This for a team that finished last year as arguably the best non-playoff team in NBA history, winning 48 games to tie the Golden State Warriors for the most non-playoff win total since the 16-team playoff format was introduced more than 30 years ago.

Honeymoon's over, dudes and dudettes.

At least, according to ESPN's "WARP Projector":

Rankings methodology
The annual offseason position rankings offer a snapshot of the top players in the league by base position, according to the forecast quantity and quality of performance for the coming season. Players are ranked by wins above replacement player (WARP), an estimate of the number of wins a player adds to a team's bottom line above what would be expected of any easily acquired talent from outside the NBA. Players are measured for usage and efficiency on both ends of the floor, and these ratings are converted to an individual winning percentage. From there, WARP is calculated based on the player's winning percentage and forecast playing time for the coming season. Playing-time projections are based on recent seasons, health and role on the player's current team. Players are assigned a position according to where they appeared most often in their most recent NBA season, though subjective adjustments have been made for some players based on anticipated usage in 2014-15.

The underlying methodology of calculating the player efficiencies used in these rankings has changed since last year and now relies on real plus-minus methodology, with adjustments. Each player's offensive and defensive RPM is converted to efficiency ratings for each end of the floor. Those ratings are then evaluated for "direct" and "indirect" impact. Direct impact is composed of points scored and possessions used, as calculated from traditional box scores. Indirect impact uses RPM to evaluate how a player affects the possessions finished by his teammates while he's on the floor. RPM has been split in this manner for a couple of reasons. First, indirect impact has a higher season-to-season correlation and is less affected by player aging patterns. Also, splitting direct impact and indirect impact is useful for projecting how players will perform in new environments and in calculating team projections. For first-year NBA players, their SCHOENE projection is used as their WARP projection in these rankings.

How did the Suns win 48 games then?

They did it through teamwork and coaching and unselfishness. And by leveling the playing field by playing their best players without regard to traditional position. But because of Bledsoe's injury, Dragic still ended up playing the majority of his minutes at point guard along with Bledsoe. Bledsoe's 2014-15 projection was downgraded due to injury and low minutes in prior years, while Isaiah Thomas was likely downgraded because of his projected role as a backup.

But what of the other positions?

ESPN named 15 other shooting guards ahead of Gerald Green, likely because his minutes are projected to decline with the presence of the Three Amigos.

They named 15 other small forwards ahead of P.J. Tucker. He may not be the most talented starter in the game, but I'd go to war with P.J. (just not in a car on a Friday night).

They named 15 other centers ahead of Miles Plumlee. That's not a total stretch. Moving on.

What has me scratching my head the most is that they named 15 other power forwards ahead of Markieff Morris, a candidate for Sixth Man of the Year with more than 13 points and 6 rebounds a game on just 26 minutes a night. If it makes you feel any better, Taj Gibson didn't make Top 15 either.

Here's how the other teams fared: 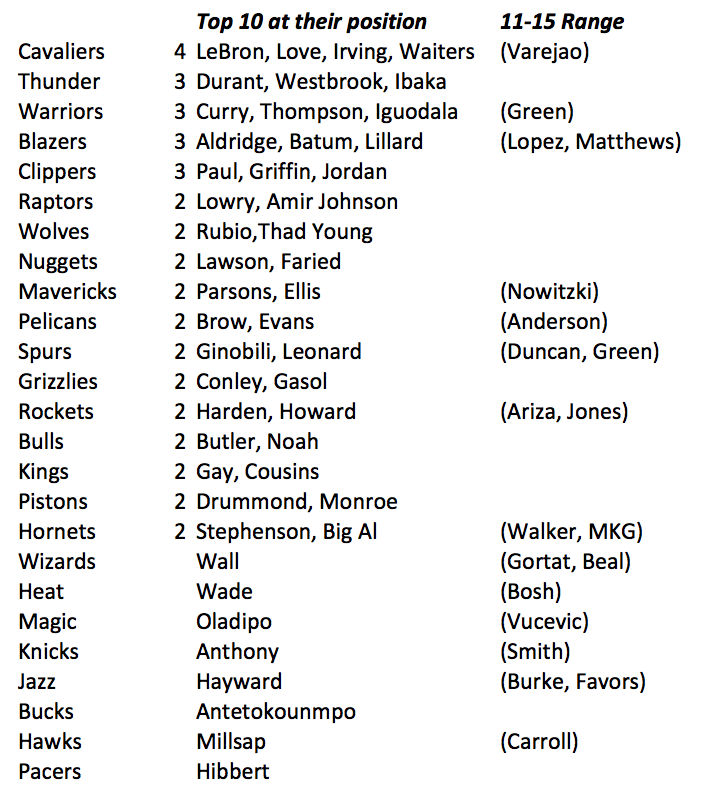 Given these rankings, will any of these Phoenix Suns become a Top 10 player at his position in the next year?

I would argue that Goran Dragic deserves a Top 10 point guard ranking right now and that he's only being held back by a projection of fewer minutes (and therefore lesser impact) in 2014-15 being part of the Triplets. But I would also argue that so far Dragic's career year is just that - a career year. He's more likely to decline slightly in 2014-15 as rise even higher.

Will 29 year old Gerald Green rise to Top 10 status when he can't even crack the Top 15 after a career year? Probably not. Same goes for P.J. Tucker. And Miles Plumlee.

Nay, the two players most likely to rise to Top 10 at their position in future years are Markieff Morris and Eric Bledsoe.

Bledsoe is already a Top 10 point guard - he was just held back by injuries and limited minutes in prior years. One more year of starting will make him a shoe-in.

Markieff Morris is entering a contract year and has been working on expanding his game to become a threat as a stretch four. If he can become a threat out there AND keep his post game alive (which was also a one-year wonder so far), then Morris can become a Top 10 Power Forward in the NBA.

So that's Goran Dragic, Eric Bledsoe and Markieff Morris who could become Top 10 Players at their position in 2014-15.

What else do those three have in common?

All could be free agents (Morris restricted) in the summer of 2015, if Bledsoe doesn't sign a long-term deal in the next 39 days.

Speaking of Bledsoe, he spent some of this summer working with kids and youth basketball camps. He also participated as a celebrity coach of a Birmingham basketball team made up of non-professional locals who beat the touring Ball Up All-Stars this summer for the first time in 4 years.

This Ball Up tour is a showcase for street ball talent to make a name for themselves and maybe even make some cash along with it.