Alex Len's short NBA career has been marred by one injury after another. But Len, who will be just 21 this season, has the potential to become a force in this league if he can stay on the court.

When Seth Pollack saw Phoenix Suns second year center Alex Len, who just turned 21 this summer, the day after he broke his right pinkie finger at Summer League and offered some encouraging words, the Ukrainian just grunted in frustrated response.

Len played one SL game, scoring six points, grabbing six rebounds and blocking two shots. Len's presence defensively was evident, using his length and agility to defend the rim multiple times on single possessions. In short, he was a force.

But now Len is pissed, for lack of a better word. 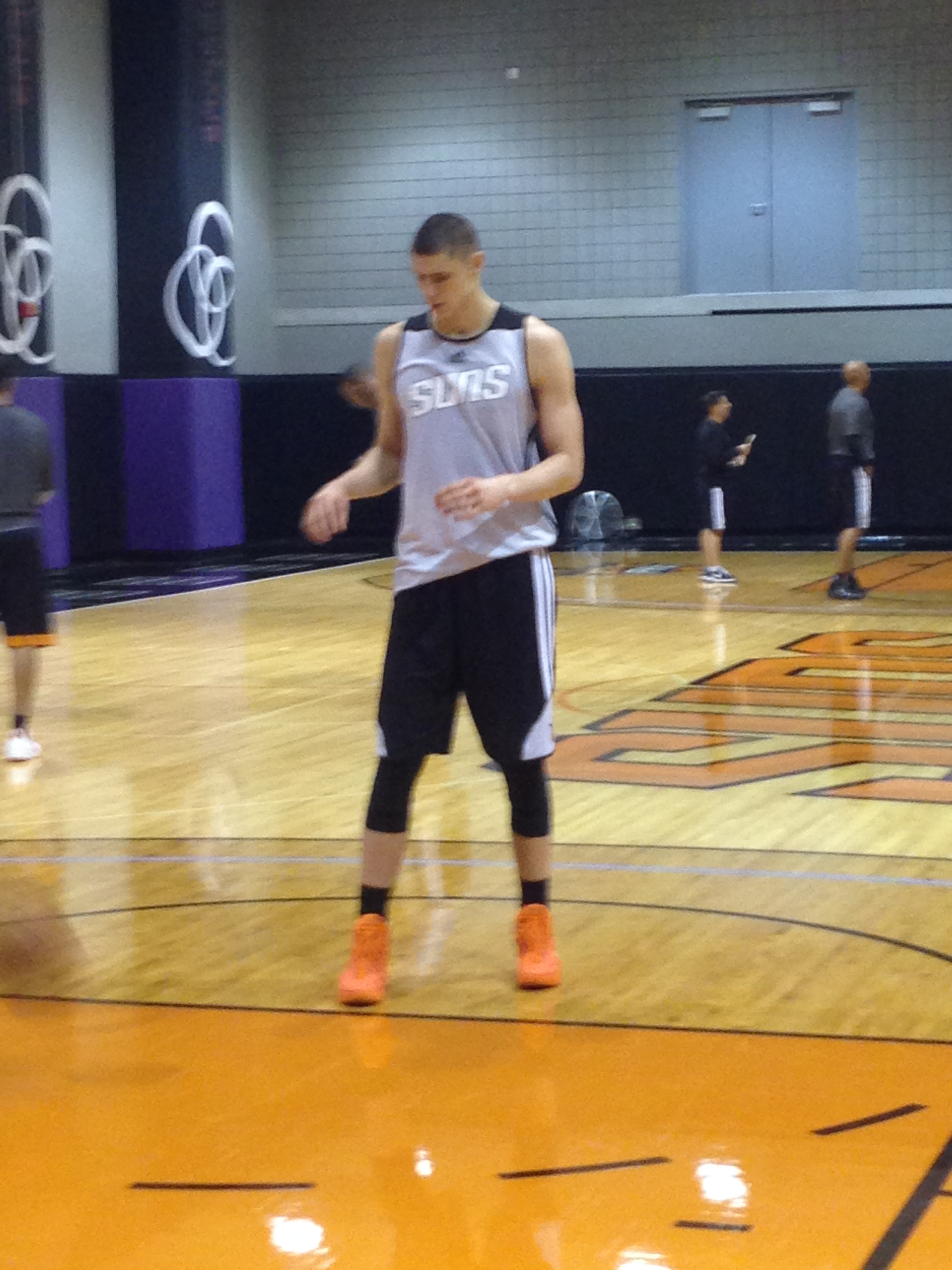 *sorry about the blur, folks. But this pic does show he's bigger this year.

He was so ready for this summer to be about getting better, not rehabbing. Between the last game of the 2013-14 season and the start of Summer League, he had really buffed up. His upper body was chiseled, and he confirmed that by saying he'd gained more than 10 pounds.

"Every day, five times a week," Len said before SL of working out in Phoenix during the offseason. "I didn't go anywhere. I just stayed here in Phoenix. And after the summer league I'm just going to come back and just keep working here."

The Suns brass had been wanting this to be the summer of Len.

"I told Alex this summer league is very big for him," Summer League coach Mike Longabardi said before they headed to Vegas. "We all know that. I want him to be available so he's got to be durable so he can play. We want to keep him injury-free as best as possible."

Unfortunately, Len didn't get that chance to keep working. Len caught his pinkie finger in the jersey of an opponent and felt it pop out of place. He hoped it was just a dislocation and popped it back into line for the rest of the game. But later, they discovered the fracture and his big summer was over. He would be in a cast on his hand for four weeks.

"The cast is off," GM Ryan McDonough confirmed to Bright Side yesterday. "He has been able to do some running and lifting over the past few weeks. He looks good physically - he's getting stronger."

It's like the exact opposite of last summer. At least this summer he was able to work on his lower body and overall conditioning, but he couldn't do basketball drills or work on his offense.

Where Len needs durability is in the ankles and feet. He's a tall young man - at least 7'1" and 260 pounds - and still in those gangly years, just turning 21 this summer.

"The most important thing is conditioning for him," Longabardi said at SL. "If he's in great shape, he's got to play and push through so he's not tired and make some silly mistakes whether its a foul or a turnover."

Of course, nothing really you in NBA basketball shape besides actual basketball. And that doesn't start again for him until at least next week.

"He is not fully cleared to play yet," McDonough said. "But we anticipate he will be cleared next week or shortly thereafter."

If Len can recover and play the whole month of pickup games at full speed, the broken finger will be an afterthought when training camp starts. You can't plan to avoid broken fingers. You have to stay aggressive and hope it doesn't happen again.

He has been gift-wrapped the backup center position this year, behind third-year center Miles Plumlee. Which of them ends up being the long-term starter depends on development. Both have a lot of room for improvement.

Len has the skill set and upside to be a two-way player who can defend the rim, the pick-and-roll, and rebound on defense while providing solid offense that includes putbacks and finishing at the rim while stretching the floor with a perfect-form, high-release midrange jumper. Longabardi even planned to play Len and Plumlee together a lot during SL, with Len being the "mini-stretch" power forward.

Here's what Longabardi said they wanted from Len this summer, which still holds true in training camp, preseason and the regular season:

Of course, the coaches and Training Staff Mafia are talking about Len's legs needing to be durable. Not his little finger. Now, Len has had another summer to rehab and completely clear up any lingering soreness and loss of flexibility. He did say at SL that he was fully healthy.

"Good, yes, definitely," Len said of his recovered ankles. "I worked hard with the training staff and they got me healthy."

He did stay in the Valley all summer, and I'm sure his legs and conditioning were a big focus over the past several weeks.

I can't wait to see Len in training camp. I really feel that, if he can string together some continued health, he can be a force in this league. He doesn't have the personality to demand the ball, but he can be better than most centers the league has to offer if he can just stay on the court. He's got a meanness to his game. He's a bit like Dragic in that he won't take any crap from an opponent, and isn't afraid to lay a hard foul on them when necessary.

Due to his injuries, few people are talking about Alex Len these days. It's like he dropped off the face of the earth. But we're talking about a kid who is easily 7'1" with about a 7'4" wingspan who is still growing into his lean body. Even so, his 260 pounds are the most of anyone on the team. He is agile and athletic. Not a roadrunner, but not a stiff either.

We could be watching one of the better young big men in the game next season, easing his way into the NBA without the pressure of an entire franchise on his shoulders.

Go to Costco and stock up on your popcorn. The Suns have a lot of storylines this year, not the least of which is how Alex Len will progress in his second season.